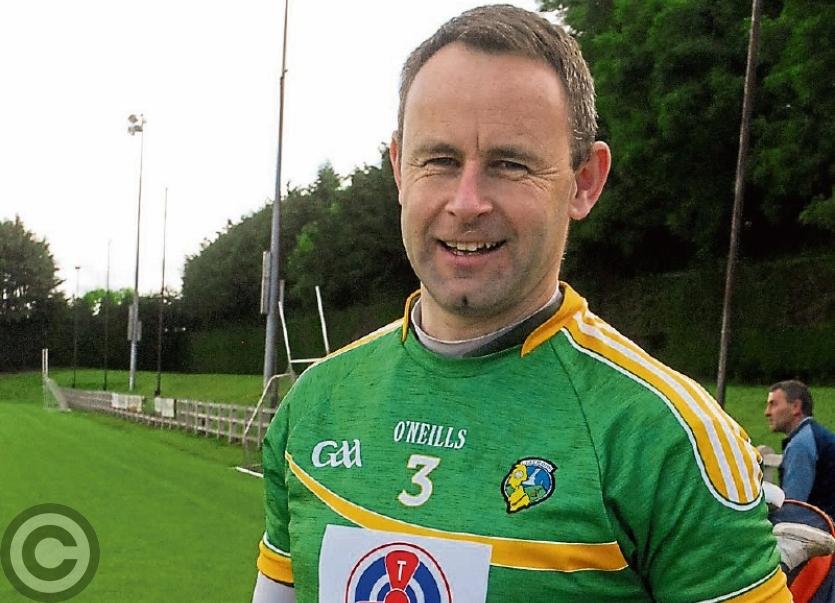 Maybe it is a lifetime of playing the game or the fact that he is a member of that half-crazed profession of hurling goalkeepers but Declan Molloy certainly proved to be one of the most entertaining interviews I’ve done in a long time.

The Leitrim netminder leads the Green & Gold in next Saturday’s Lory Meagher Cup Final and over the course of an engaging chat ahead of the meeting with Lancashire, you get the sense that this Leitrim team will not be satisfied with anything but victory.

Even the notion of being on a history making Leitrim team isn’t enough to satisfy Declan: “A lot of people say this is the best team Leitrim ever had but I’d rather have a Cup to prove it. I’ve played on an awful lot of teams that were very good teams and won nothing.

“It is like you play a game and you get the man of the match award for being on the losing side but I’d rather have a crap game and win the thing! We want to finish this one out and bring the Cup home.”

Saturday marks the second time a Leitrim county side grace the hallowed turf of Croke Park this year but the novelty wore off pretty quick for the hurlers after their 2017 Lory Meagher Cup Final loss to Warwickshire.

It is a point Declan is keen to stress that Leitrim are treating GAA headquarters as no different to any other pitch! “I know it is a special place but when you lose up there, it’s not so special. We’ve already lost up there.

“Losing any final is not easy and it hurts, there is a lot of pain after it but losing the Lory Meagher Final, it does stay with you,” Declan said, a revelation to the general public but perhaps a warning to his team-mates.

Certainly, the Galway native has noticed a big change in Leitrim hurling over the years: “This is my fourth or fifth year and it's been a super five years. We got to the League final last year, beaten after extra time after having a man sent off 15 minutes into the game and we lost the Lory Meagher Final the year before.

“It has been a great couple of years for Leitrim, when I first came to Leitrim, we had trouble fielding a team, you’re begging lads to play. We went up to Lisbellaw a few years ago and had 13 lads five minutes before the start and you’re looking to see are you togging Michael, Martin or Paddy.

Goalkeeping is an unforgiving task, errors magnified beyond belief but a hurling goalkeeper can sometimes seem like trying to catch a butterfly in a hurricane, something for the deranged as sliothars fly in like bullets from all angles and distances.

It is a notion that Declan agrees with: “I can definitely confirm it is 100% true, you need to be half cracked to stand in goal in hurling. You could play out the field and drop ten balls and not one word said to you but in goals, you drop one ball with a minute to go and you’re two points up, you’re going to get a few nice choice words.”

Yet for all the tension, Declan loves the job even if he fell into literally by accident, an accident to a team-mate! “I enjoy playing in goals, I started my career as a forward but then a couple of years ago, I was playing full-forward and I hit our goalkeeper, I got blamed for breaking his finger and then the manager said, you broke it, you go in goals so.

“I managed to stand in there, a few balls hit off me and I got stuck there. When you get over 30 any more, playing with young fellas, you’re saying do I want to play out the field or stand in goals and direct operations.”

His philosophy as a keeper? “My main aim is to keep the ball as far away from me as possible, that’s when I’m enjoying the game. Goals is a tough position but it is also a great position.

“Communication is key and that is what a lot of people don’t see. When there are 65s, long frees being taken, I’ll be shouting at guys in midfield to drop back to centre-back and stand there.

“It is really a great source of satisfaction to me in a game if I call a midfielder and send him to centre-back for a sideline ball and I say stand there and the sideline ball goes straight to him, he catches and clears it, I consider that is my contribution done and nobody else knows it except me and the guy I call back to position.”

But the Leitrim captain stresses he is nothing without his teammates: “You can have the craziest goalkeeper you want but unless you have the players and the right management structure behind you, you’re going to get nowhere.

“These guys are great, the commitment. You can see it here, loads of guys here before training, a lot of these guys are working away from home and the sacrifices they put in to get here, they are just a great bunch of guys.”

Neither does he imbue his role as captain with any great significance: “We don’t need a captain until there is a Cup to be picked up and there has been no cup yet. We have great leaders on this team from one to 30, we have leaders in every line of the field.

“We need a captain to pick up the Cup and we’ve no Cup to pick up yet. My focus is to play the game and after that, whatever I say or do after that, I can’t take it back. We are all in together, there are leaders everywhere on this team but if the Cup is there, I’ll certainly oblige and pick it up.”

Leitrim go into the final full of confidence but also determined to right what they regard as a wrong after the staging of the first game in Manchester last month, not to mention the Division 3B League Final last year that Leitrim lost after an injury time epic and having a man sent off

“It is not a great game when you lose,” said Declan of that League final in Ballyconnell, “We have plenty of ammunition which I’m sure will be said under the Hogan Stand on Saturday. We lost the League final and were a man down, we went over there last month and lost by two points.

“We feel aggrieved with a lot of the things that went on but we are certainly looking forward to this game, to give it one right good rattle.”