A tale of two stadiums & a day to remember 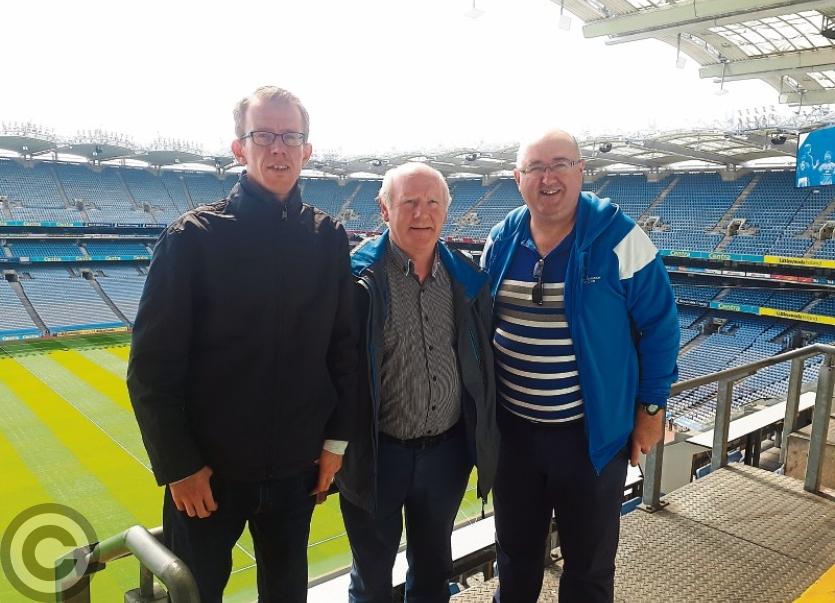 The Observer crew of Philip Rooney, Willie Donnellan and John Connolly in the Croke Park pressbox last Saturday before the spin back down to Carrick!

Two stadiums, 163 kilometres, two motorways, one dual carriageway, one roadside restaurant, one petrol station, 22 roundabouts, God knows how many traffic lights and countless motorists, some that drove you to distraction and all to get to two Leitrim games!

The planning for Saturday's double header of Lory Meagher Cup Final in Croke Park and the All-Ireland Qualifier against Clare in Avantcard Pairc Sean Mac Diarmada may have seemed a little bit like planning for D-Day and it certainly felt as if the Observer was going to war!

Embarkation point was Carrick, the invading army boosted by the arrival of Philip Rooney and the Observer's biggest gun - Willie Donnellan. 8.30 am departure point, check, and off we went, a quick stop at Sheridan's Roadhouse outside Mullingar ensuring we were well fuelled up for the day.

The last time we made this journey, the road was full of LM cars and Green & Gold flags - this time, not so much!

Negotiate the M50 and Croke Park here we come, pop into the Croke Park Hotel where the diehards had gathered: Sean Earley waiting anxiously to cheer on his sons Fergal and Paul, Gerry McGovern from Cloone, Carrick's Seamus and Johnny Murray taking refreshments and the County Board gang getting lunch.

Across Jones Road, through security, up the elevator to the seventh floor and the magnificent press box. Strangely, it was Willie's first time to be up there and while you get envious enquiries about the view, the cold and the danger from circling seagulls more than takes any lingering glamour.

The press box seemed like Pairc Sean transplanted - P.J. Leddy and Seamus Gallagher joined by Darren Mulvey while County Board PRO Declan Bohan soon plonked himself among us, tweeting to keep the news flying all over the world.

How the action unfolded, we'll leave to elsewhere but the mechanics of getting a good Leitrim team photo were certainly discussed, late arriving players and impatient ones meaning it is hard to produce the special memento that will adorn the walls of many a house for years to come.

The welcome cuppa at halftime was a God-send; the Leitrim press contingent were confident but the second half looked as if it would be another horror show, our only worry being what might happen if the game went to extra-time!

So naturally, the game went to extra-time, calculations on time versus speed versus the real possibility of a speeding ticket all springing to mind. Thankfully, it was all worth it in the end!

Sprint to the lift, dash to the dressing rooms and try to get a word with Leitrim's heroes, all while savouring the reality of a rare Leitrim victory in Croke Park, Colin Regan of this parish popping his head in to congratulate the hurlers, speeches from Terence Boyle and lots and lots of press!

Interviews done and out the door, across the Jones Road, stop anyone trying to chat with Willie and delay our dash back home and, hey presto, we're on the road!

A lot more traffic, a lot more headaches than we encountered on the way up and if we thought we were going hard, getting smoked by cars flying Green & Gold flags on the M4 is some sight.

Multi-tasking in its finest form was demonstrated by Philip, uploading stories, videos and pictures and testing Ireland's WiFi network in a truly unique way.

Quick stop at Supermacs at Ballinalack, place is so crowded that it is just sandwiches and coffee at the car and, bang, we're off on the road again. Even we can't believe the time we are making as we pull into Carrick but no time to relax, straight into Pairc Sean, download photos, update social media and get ready for part 2.

We'll leave the commentary to the match report but the shouts from the press box this time were ones of frustration rather than joy as it was obvious from early on that there was only going to be one winner.

Final whistle, down the stairs and out on to the pitch to get a few words with players and management. It never ceases to amaze me the decency of players to answer questions on how they feel just minutes after what must be an enormous disappointment. But answer they do, with pride and honesty and that is something special.

The day is not over yet, at least not for the Observer crew - reports and photo galleries to be loaded on the web and all before we even think about the paper itself.