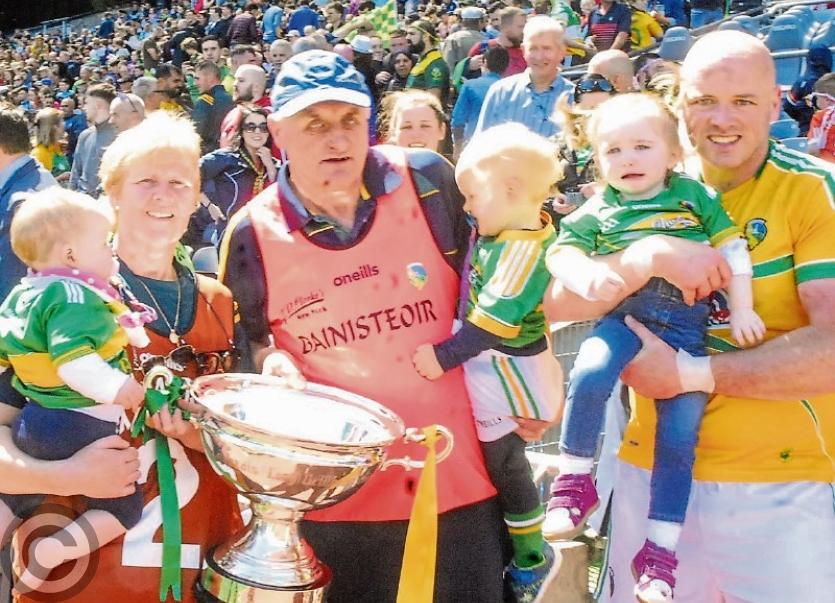 Since moving to Leitrim from Galway 40 years ago Martin Cunniffe has been to the forefront of all things hurling in Leitrim although days of unbridled joy have been few and far between as he has witnessed more than his fair share of heavy defeats and hard luck stories.

When referee Kevin Brady blew the full time whistle all those years of hard work without reward, disappointment and despair were quickly forgotten as the Leitrim players, management and county board officials were able to breathe a sigh of relief and the jubilant celebrations got underway on the famous Croke Park pitch.

Normally a man of few words, in the aftermath of Saturday's triumph Martin looked back at tougher times for the county's hurlers and insisted those dark days have been banished in the wake of Saturday's one point victory over Lancashire.

As he reflected on his own personal journey with the Leitrim hurlers, Martin reserved a special mention for another of the county's hurling stalwarts, Paddy Phelan, who sadly passed away last year.

“Those days, they have all disappeared, they have all vanished. We had sad days in Leitrim; days way back when you had to count fellas in the dressing room and maybe we would have had 14 or 15.

“Paddy Phelan, the Lord have mercy on him, I’d say he had a word in for us, above, today and I hope to god he had.

“There would have been nobody more delighted if he was here. There were days when Paddy himself had to tog out for Leitrim but those days are long gone because we started off this year with a panel of 41 and as you heard Declan Molloy saying in his speech, it was the first time there was ever talk of cutting a panel.

“That is a very rare thing in Leitrim hurling but that is how it is now. There is a gang of young fellas coming up and every man from the goalkeeper up to 15 are under pressure.

Reflecting on the game itself, which was action packed throughout, Martin acknowledged it was almost another hard luck story for Leitrim but one of the county's veterans, James Glancy scored a crucial goal that ensured the game would go to extra-time.

“It fell to him at the right time and no better man to put it away and we weren’t surprised by it because these lads, they weren’t going to give up. They were going to fight until the last. We only won by a point but we felt confident we were going to take it and thank god we did.”

Having levelled matters in the closing stages of normal time, Martin expressed the belief that there was a confidence within the Leitrim ranks that they would be able to further impose themselves on their opponents during the additional 20 minutes.

“It was in our own hands,” Martin declared as the game prepared to enter extra-time with everything still very much to play for.

“We came in after full time and we said we had to go out and finish the job we came here to do and that is what they did. We brought in a few fresh legs and they turned it around.”

At the end of an epic encounter Martin was generous in his praise of the beaten Lancashire team and also expressed the view that some of the Leitrim players are capable of playing at a much higher level.

“In fairness Lancashire have some great hurlers. There are a few lads there from Wexford and Kilkenny.

“They have some powerful hurlers but we have lads on that panel that will match anyone in the country.”

Attempting to put into words what the victory in the Lory Meagher Cup final meant to him and the entire hurling community in the county, Martin insisted it was an occasion that deserved to be celebrated properly!

“It’s a great year when you win a cup. It’s a massive year for the hurling community and we are going to celebrate it.”