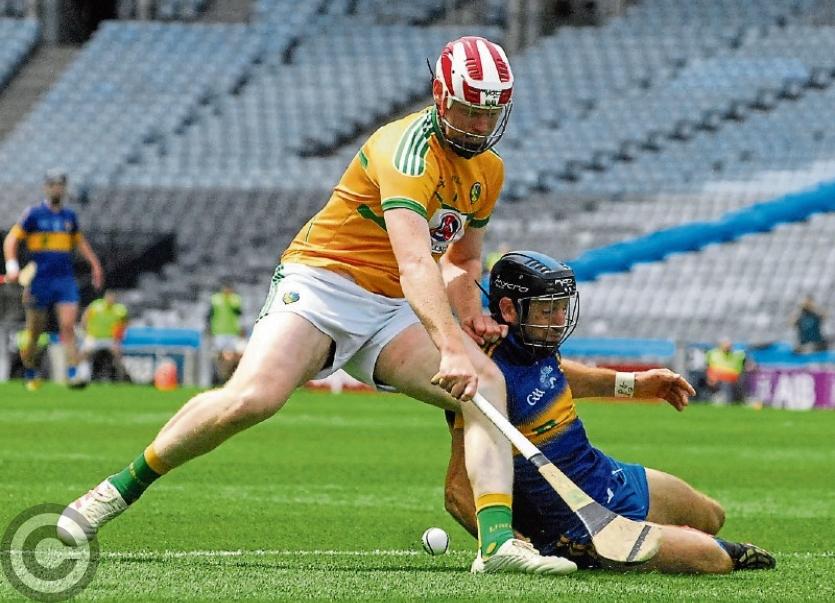 Colm Moreton gets to the ball ahead of a Lancashire defender during the Lory Meagher Cup Final Picture: Willie Donnellan

They left it late, dangerously late, but when Leitrim struck for glory in Croke Park last Saturday, there was nothing Lancashire or anyone else could do to stop them claiming a first ever Lory Meagher Cup.

The historical impact of this victory is enormous - a first ever trophy won in Croke Park by a men's team and promotion to the Nicky Rackard Cup for next year. And won in a manner that usually saw Leitrim teams lose in the past.

Had James Glancy's shot not found the net, there would be no question that Lancashire would have been worthy winners. Leitrim rode their luck at times as ace freetaker Ronan Crowley missed frees while both of Leitrim's goals came with a slice of fortune.

Yet even for all that, Leitrim's victory well merited. They refused to lie down and put a horrible second half behind them to finish the game with two Gavin O'Hagan frees and Glancy's goal in the last six minutes of action to rescue the draw.

Once the game went to extra-time, Leitrim were in the driving seat as their energy and deeper resources told. Yet even then, Lancashire had some bad misses and closed a five point gap down to just one when the final whistle sounded.

It was Leitrim's resilience and self-belief that carried the day. David McGovern was immense at full-back, James Glancy likewise in the centre while Clement Cunniffe and Gavin O'Hagan were superb in attack, both in the running for the man of the match accolade.

We can't forget about the Moreton brothers who were immense: Colm came up with some vital scores, Liam was a rock in midfield and Enda rivalled Cunniffe & O'Hagan as the game's most influential player.

The brothers may also have set a unique record as the only brothers to all score and also be booked in a National Final. It is a statistic they truly won't care about today with the Lory Meagher Cup on the mantelpiece!

Leitrim started brightly, Clement Cunniffe had a shot blocked as the early ball was paying dividends, the Carrick man setting up Gavin O’Hagan for the opening scoring a minute in.

A wasteful Lancashire hit their third wide by the third minute and another ball to Cunniffe was worked back to Adam Byrne for the score. Lancashire opened with a Ronan Crowley free from a yard or two outside the 70 yard line but Enda Moreton’s bomb was 55 yards on eight minutes restored the gap.

But it was Lancashire who would go on to grab the game by the scruff of the neck as Leitrim fought to stay in contention. Darren Crowley fired over on nine minutes while Trevor Lee tied the scored two minutes before a Ronan Crowley free edged Lancashire in front for the first time.

Gavin O’Hagan's great catch led to a score 14 minutes in but Darren Crowley hit back to restore the lead.

Fortune favours the brave and the game changed with a large slice of good fortune. Lancashire keeper Ronan McAteer gathered a low shot but was dispossessed by Colm Moreton who swung languidly to send the ball to the net.

A block on a Moreton shot and a bad wide from Adam Byrne saw Leitrim fail to build on the goal but Colm Moreton battled his way through and fired over.

Tommy Maher fired over from distance and then, in an incident that only assumes importance because of what happened later, Declan Molloy raised his stick high to prevent a sure fire Lancashire shot from crossing the bar.

Karl McDermott’s fine catch set up Cunniffe for a good point and Gavin O’Hagan punished a 31st minute foul on Cunniffe with a successful free to stretch the lead to four points. But that good Leitrim work was wiped out - Ronan Crowley made a wonder catch and blasted to the Leitrim net to cut the gap to one.

Leitrim’s responded brilliantly - O’Hagan was unlucky to see a shot hit the woodwork but McDermott put the rebound over while Moreton managed to gather a long free and scoop the ball over the bar despite being surrounded by the entire Lancashire defence.

Ronan Crowley and Cunniffe swapped equally brilliant points as Leitrim led 1-10 to 1-7 and well on their way, a point reinforced when Liam Moreton fired over just 20 seconds into the second half from 65 yards.

Edmund Kenny scored a brilliant effort from the corner but Adam Byrne replied instantly as Leitrim looked in control. It was a false image as Leitrim would be held scoreless for 20 minutes and Lancashire would storm into the lead.

Ronan Crowley’s brilliant point got them moving and the points slowly but surely started to flow for Lancashire as Lee, Ronan Crowley (2), Kenny, Conor Duggan and Darren Crowley all swept over excellent points while Molloy made a good save to deny Justin Cleere a goal.

Colm Moreton stopped the rot with a great catch on the sideline and pointed a wonder effort but Lancashire hit back with two Ronan Crowley points. Ben Murray hit a lovely point but when J.J. Dunphy scored after a scramble to stretch the lead to four, it seemed all over with four minutes left.

O’Hagan tapped over two frees to raise hopes but a Darren Crowley free left the gap at three points with over two minutes of the five added time played.

But there was still time for drama as Leitrim worked the ball towards the Hill 16 end, sub Zak Moradi playing the ball across the 20 yard line to James Glancy. The centre-back’s shot may have been heading to the net but the huge deflection ensured the keeper had no chance and Leitrim rescued the game.

Patrick Duggan opened the scoring in extra time but as both sides missed chances, Colm Moreton levelled on three minutes. As Crowley’s accuracy deserted him, Leitrim finished the half in powerful form as O’Hagan fired over two frees while Zak Moradi pounced on a loose ball to score.

Three points up and visibly stronger than the rapidly tiring Exiles, Leitrim were close and a great pass from O’Hagan set up Cunniffe for a great point. Tommy Maher replied but an O’Hagan free opened up a four point gap six minutes into the second period of extra time.

Clement Cunniffe was a new man in extra-time, seemingly finding a new lease of life and it paid off as he was pulled back on his way through. Penalty awarded, Gavin O’Hagan did the sensible thing and put sliothar over the bar to open up a seemingly untouchable five point lead with less than a minute of time left.

But Lancashire refused to quit - Ronan Crowley fired over a free before another raid ended with Patrick Duggan firing the ball to the Leitrim net. Thankfully, almost two minutes of added, added time had been played and the final long whistle sounded seconds later to start the celebrations.

Talking Point - For all the talk on social media about fans missing out on two games, a very disappointing turnout in Croke Par. Where were all the keyboard warriors?

Lowlight - A poor second half display looked as if it would sink the Green & Gold.