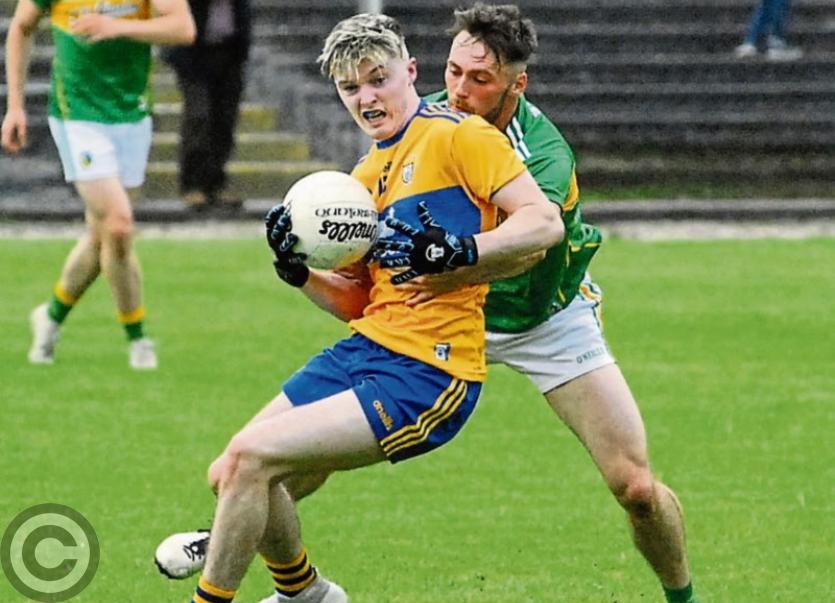 As the Leitrim players, management and supporters congregated on the Avantcard Pairc Sean Mac Diarmada pitch on Saturday evening, reflecting on what might have been, for the Clare contingent it was a case of a job well done as attention turned quickly to the next round of the qualifiers.

Clare manager Colm Collins took plenty of positives from his side's performance, particularly in the opening half but felt the second half showing wasn't up to the standard required.

Reflecting on the game Colm said: “From our own point of view we are very happy with the first half. I thought we played some really good football and did what we set out to do, less so in the second half but you have to give Leitrim credit because there are two teams in any game and they were always going to get some period of dominance.

“I thought they played much better in the second half and kicked some very good scores. All in all I am just happy to be in the draw on Monday morning.”

The banner boss insisted a fast start was key to Clare's success saying: “It was awfully important. The longer you leave the other team in the game, especially when we were away from home, the doubts start to creep in. A good start was targeted and thankfully we got that.”

Clare's midfield powerhouse and captain Gary Brennan agreed with that sentiment when he said: “We were very conscious we wanted to start the game at pace and try to play at the pace we are capable of playing at and I think we did that for long periods of the first half.

“If we can get a bit more of that sustained over 70 minutes, we seem to be saying it all year but if we can sustain it for a bit longer we will be competitive for anyone.”

Not so long ago Clare and Leitrim would have been familiar foes with annual meetings in the national league. However, in recent years Clare have been operating at a higher level meaning you would think scouting missions would be less than straight forward.

However, both Colm and Gary insisted they had studied Leitrim closely and weren't going to be caught off guard in Carrick-on-Shannon.

Colm insisted “I would be meticulous about that. I had seen every Leitrim game. There were no surprises, absolutely not.”

Gary was equally well prepared saying: “I had watched a lot of Leitrim this week and I was hugely impressed with them and that is not just saying that. I thought they played a brilliant style all year - very pacy and then attacking wide and then looking to use the boot and using it very effectively for an awful lot of the year.

“We more than wary of the Leitrim threat so maybe it was a pleasant surprise that we settled into the game so quickly.”

With a 12 point lead to protect after a commanding first half display the only difficulty for the Clare boss was how to avoid complacency in the second half.

When asked how he avoided such a scenario he replied: “Well, it obviously didn’t work too good anyway! I suppose you just have to keep driving on and emphasise the fact that there are places up for grabs.

“We used all our six subs in the second half but sometimes a lot of these games you can focus totally on one team but I think you have to give credit to Leitrim. They had a hammer blow at the start of the game losing Ryan O’Rourke who has been their top scorer throughout the season. Their display in the second half, Shane Moran kicked some great points and they played really well and got a good grip in midfield

“Credit to Leitrim, it is not just about one team.”

Gary Brennan was also complimentary of Leitrim's second half showing although he was left frustrated by some of his side's wayward shooting.

“We were very focused and felt we had made a few mistakes in the first half.

“There were a few things that we had left out there so we were anxious to try and chase the pace of it again and push the pace in the first few minutes but there were some sloppy things from the very start of the second half and to be fair to Leitrim they minded the ball a lot better than they did in the first half.

“They built their way into the game and our intensity just wasn’t where it was in the first half.”

Despite his frustration at aspects of the second half Gary was nevertheless pleased to have advanced to the next round.

“We wanted to be listening to the draw on Monday morning to see where we are going to be and thankfully we are there and we are looking forward to it.”