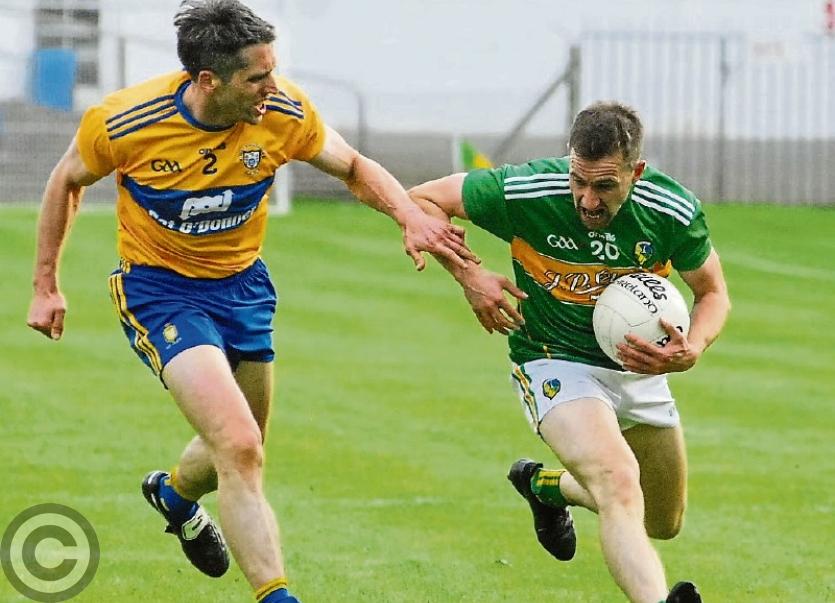 Let there be no talk of 'what if' and 'if only' as a late Leitrim surge put a shiny but false gloss on a dominant and impressive Clare victory in Avantcard Pairc Sean Mac Diarmada last Saturday.

Clare's nine point victory was every bit as convincing as the demolition job the Rossies did on Leitrim last month and why shouldn't it be as the Banner men religiously followed the same template that Roscommon used in this All-Ireland Qualifiers Round 2 clash.

Hard challenges and tough tackling forced turnover after turnover while equally hard running and precision passing cut open the Leitrim defence time and time again, the only wonder at halftime being the fact that Clare had only scored 2-12 in the first period.

Were it not for three wonder saves from Cathal McCrann and the intervention of the crossbar, this could have been so much worse than it was.

Clare obviously wanted to lay down an early marker and they did with Gavin Cooney off-loading smartly for Jamie Malone to fire over. That smart, quick and precise passing would be a feature of Clare’s play and Leitrim would not have an answer.

Domhnaill Flynn put a free badly wide and when a Leitrim attack was turned over on five minutes, a quick move down the wing resulted in an Eoin Cleary point. The alarm bells were ringing as only a last gasp Micheal McWeeney block on Sean O’Donoghue's shot prevented a goal on eight minutes.

Another turnover on nine minutes led to another quick counter, Gary Brennan scoring as Leitrim looked rattled. It certainly didn’t help that Ryan O’Rourke pulled up with a hamstring strain and after trying to run it off, the Fenagh man had to admit defeat with Evan Sweeney coming on.

Paddy Maguire’s crossfield pass found Domhnaill Flynn in space for a good point and Dean McGovern literally threw his man aside before firing over on 11 minutes, a burst that cut the gap to just a point.

Unfortunately, it was a false dawn as Clare hit a blistering 2-5 in the next 11 minutes before Domhnaill Flynn converted a free. Eoin Cleary got the riot going with a fine point before the first goal soon arrived.

A brilliant run from Conal O hÁiniféin down the left wing went unchallenged, Conor Reynolds making an unsuccessful desperate late charge from the other wing to try and stop him. An off-load to Jamie Malone saw the Clare forward show patience as he rounded McCrann and the ball was in the net.

Gary Brennan fisted over the bar with a goal on while David Tubridy added two points, the second after a Cleary shot rattled the crossbar. Tubridy converted a fifty after McCrann made a wonder save from the Clare man, set up by a brilliant tap down from Gavin Cooney.

Conor Reynolds picked up a yellow card that would prove costly and the game was finished on 21 minutes when Cleary sent a long ball goalwards. Whether it was a shot that dropped short or a pass to Gary Brennan, it mattered not as Brennan thundered a fisted effort off the crossbar before calmly tapping the rebound to the net.

Flynn’s free was followed by a Cleary free and another Flynn free while McCrann made yet another great save from Jamie Malone to prevent a third goal. Evan Sweeney got off the mark but Tubridy swept a huge effort over the bar under huge pressure.

A block on Pearse Dolan’s goal attempt led to a Dean McGovern point but Clare finished the half with points from Tubridy and Cleary frees to leave the score 2-12 to 0-6 at the break.

The only other item of note was the generosity shown to Conor Reynolds who dragged down a Clare man for one of the frees but referee Niall Cullen didn’t show the yellow. Terry Hyland got the hint and brought on Oisin Madden and made two more changes after the break with Jack Gilheaney and Jack Heslin replacing Ray Mulvey and Oisin McCaffrey.

The second half started off sedately with a soft free leading to a Sweeney conversion on five minutes. Clare, keen to dampen down any rebellion, replied with points from Cleary and Jamie Malone, both after turnovers, before Shane Moran swept over from 45 yards.

With the pace gone from the game, the game went eight minutes without a score as Moran points again. Clare’s response was indicative of the gulf between the teams as a move involving Brennan and sub Kieran Malone ended with another sub Eimhin Courtney tapping the ball unopposed to the Leitrim net with just over 15 minutes of normal time left.

Game won, Clare began to bring on subs and their intensity dropped while Leitrim began to get a run of decisions from the referee. Tubridy tapped over a free before Evan Sweeney got two in a row, the first from a free, the second after the kickout was intercepted.

With Clare dropping shots into McCrann, Dean McGovern got Leitrim’s 12th point with seven minutes left and it sparked a mini-Leitrim revival as Mark Plunkett converted a fifty, Shane Moran scored from distance and Plunkett added another from play.

Clare still showed they could score at will, a Courtney run setting up Gary Brennan for a fine point. Jack Heslin fisted over a Pearse Dolan pass while Clare butchered a goal chance when they broke with three men over on the Leitrim defence, Kieran Malone shooting wide.

Evan Sweeney hit Leitrim’s last point of the year more than three minutes into added time to complete a strong display but the impressive Eoin Cleary had the last word for Clare, a quick free and an equally quick point demonstrating the gulf between the teams.

TALKING POINT - The same flaws that Roscommon & Derry exposed were exploited here in devastating fashion by Clare, no wonder with Colm Collins' admission that he watched every single Leitrim game this year. A late rally put a gloss on the scoreline but it was not reflective of the contest as a whole, Leitrim were decidedly second best in every sector and Clare were just too fast and too strong.

HIGHLIGHT -Leitrim's final 15 minutes, albeit aided by Clare visibly easing off the gas, showed a good deal of pride. Teams have been built on far less in the past.

LOWLIGHT -The first half was a horror show for Leitrim fans as Clare simply ran through the rearguard at will, their physicality and running power punching holes time and time again in the defence as Leitrim turned the ball over far too frequently.

TURNING POINT - Ryan O'Rourke substitution and Jamie Malone's goal seconds later completely killed this game just 13 minutes in. With this double whammy, the game was as good as over.

REF WATCH - Niall Cullen let Conor Reynolds off with an obvious second booking and gave Leitrim a run of frees in the second half that seemed strange given the play.

MAIN MAN - The usual suspects - Paddy Maguire, Micheal McWeeney, Shane Moran, Evan Sweeney, Dean McGovern - can't be faulted. Neither can Cathal McCrann who did incredibly well to keep the score down. But all the class was on the Clare side - Jamie Malone, Eoin Cleary, Gavin Cooney, Aaron Fitzgerald, Cillian Brennan were all class but Gary Brennan was immense for the winners. Size, physicality, power and pace in one devastating package.

WHAT’S NEXT - Clare face Westmeath in TEG Cusack Park in the next round of qualifiers while Leitrim must wait to January to return to action.