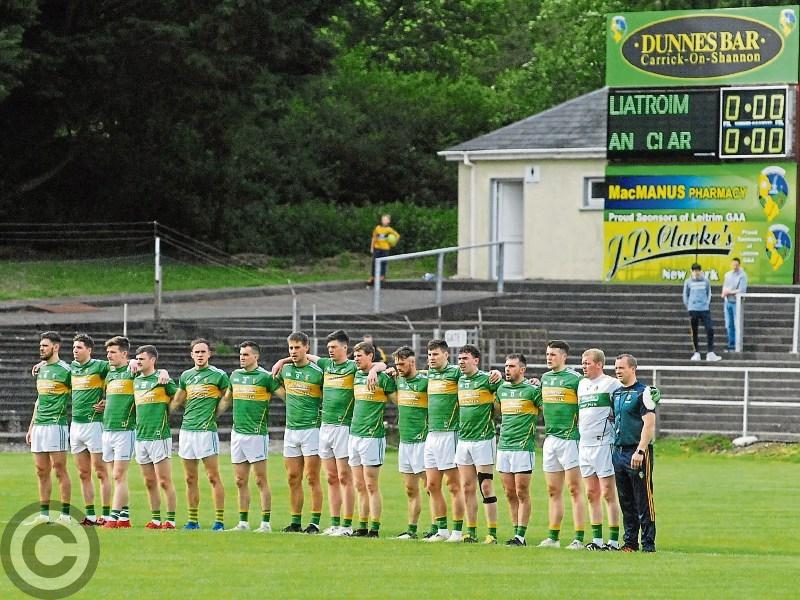 The Leitrim team before the Qualifier clash with Clare Picture: Willie Donnellan

Always tough to lose a championship game, tougher still to be asked to talk about it but, as he has all year, Evan Sweeney didn’t shirk the challenge when asked to chat by the Observer.

Plainly obvious that the disappointment was biting deep after the loss to Clare, the Glencar/ Manorhamilton player admitted Leitrim found it hard to cope with Clare’s physicality and pace: “Initial feeling is disappointment. We felt that we could put it up to Clare but the level they are at, that’s where we want to be in a couple of years time.

“Today, the goals early on rattled us and we found it hard to respond really. They were very strong in contact, when we were bringing the ball into contact in the first half, they were turning us over on the half-forward line and their wing backs were just going straight down the middle.

“We really struggled when we brought the ball into contact, when we kept the heads up and moved the ball fast, we seemed to cause them trouble at times.”

The loss of Ryan O’Rourke to injury after just 13 minutes was also a huge blow to his teammates: “The initial thing is losing Ryan is a huge thing. We need everyone on the field and for a player like Ryan to go off, it was just an awful loss to the team.”

Two heavy defeats have followed Leitrim’s League promotion and Evan agrees that Leitrim have a lot of work to do: “We just have to get back to the drawing board for next year. Maybe we put a huge focus on promotion.

“When we met last October with Terry and the backroom team, the focus was promotion, promotion, promotion. Maybe we found it hard to bounce back once we achieved that goal. We’re in Division 3 next year and at least we are playing higher ability teams.”

For Evan, 2019 saw him make his Senior team debut and claim a starting spot for almost all the campaign so despite the disappointment, it was a good year: “It is hard to say now because you are so disappointed for the team but if you said to me this time last year that I would even be involved, I’d have been really happy just to be involved.

“So to get some game time and to contribute in some way, I’m over the moon personally but as a team, we just have to dust ourselves down and look ahead to next year.”