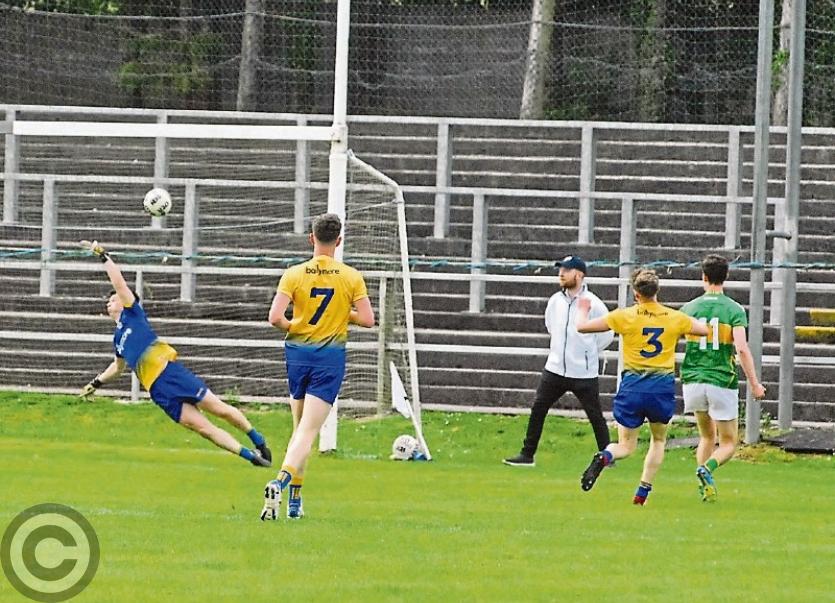 A week on and it doesn't feel any easier to take as a brave but ultimately futile effort from an unheralded Leitrim U20 side fell short against Roscommon in the Eirgrid Connacht U20 Championship opener.

There is more than enough controversy and talking points to fill two match reports but in the end, Leitrim's failure to see out the game from a winning position will hurt so much more as time goes on.

Leitrim can justifiably feel aggrieved over Roscommon's injury time equaliser that sent the game to injury time, a shot that looked as if it was hit wide by Paul Carey, the full-forward clutching his head in his hands after his kick but the score was given and Leitrim never recovered.

That sent the game to extra-time and Roscommon dominated the first period, hitting an unanswered 1-2 as Leitrim seemed to struggle with the disappointment of not winning the game in normal time.

But instead of collapsing, three great points from Jack Gilheaney and a Mark Diffley free reduced the gap to a point. Brian Derwin scored what looked like the insurance point in the first of two minutes of added time but a monster Aaron Hoare scored gave Leitrim one last chance.

And they got it! A foul some 54 yards out and in front of the posts was left to Mark Diffley to take it with the referee telling him it was the last kick of the game. Unfortunately, the St Mary's man couldn't find the target as Roscommon got out of jail.

As much as Leitrim's display filled you with pride and restored a bit of hope to the county, there is still the nagging feeling that this was a game that got away, not through any lack of physicality or footballing skill but through a lack of self-belief.

When Leitrim went six points up and Roscommon had a man sent off, Leitrim should have pushed on and went for the jugular! Instead, players started dropping deeper, mistakes crept in as the ball was kicked over the sideline and goal chances and points that were being gobbled up earlier were spurned.

Call it a lack of self-belief or trying not to lose the game rather than win it, Leitrim imploded in those final 15 minutes of action and Roscommon, full of the self-belief and drive Leitrim so badly needed, forced an equaliser and then won the game in extra-time.

Not that it was needed but extra-time proved that point. Roscommon blitzed Leitrim early on but with the game seemingly gone from them, Leitrim rose from the dead and hit four unanswered points to close the gap to a point.

Unfortunately, that lack of killer instinct reared it's head again as once Leitrim saw a draw within grasp, shots were missed and mistakes made and that was the only difference between the sides - Roscommon knew how to kill the game and Leitrim didn't.

Roscommon were denied an early goal from Paul Carey but David Keenan popped over the loose ball but five minutes into the game, Leitrim did find the net, Paul Keaney and Jack Gilheaney releasing Mark Diffley who unleashed a rocket to the roof of the Roscommon net.

Three minutes later, Leitrim had a second goal, with a large slice of good fortune. James Clancy sliced open the Rossies defence and played the ball to Jordan Reynolds. Roscommon's Robbie Dolan slid in front of the ball, blocking the shot with his thigh but the referee blew for a penalty, expertly dispatched by Diffley.

Roscommon hit back with a Paul Carey point before Dylan Ruane got away with a bit of overcarrying to add another for the visitors.

It wasn't all going Leitrim's way as Riordan O'Rourke was black carded for hauling down Ronan Dowd, Dowd converting the 50 yard free and Roscommon went in front on 15 minutes when a poor kickout saw Dowd run in to blast the ball to the net.

Mark Diffley was unlucky to miss a goal chance before Jordan Reynolds scored a brilliant effort from a tight angle and just two minutes later, Jordan went better again, showing great footwork and persistence to fire home from a tight angle after being set up by a great Tom Prior run.

Ronan Dowd and Ciaran Cullen swapped points, the influential Cullen adding another before halftime while Diffley converted a free to give Leitrim a 3-4 to 1-5 halftime lead.

Diffley opened the scoring in the second half but it was a different Roscommon in the second period as frees from Carey and Dowd were added to by a Daire Keenan point.

Another Keenan point had the gap back to two just nine minutes into the second half. Oisin Bohan, who replaced O'Rourke, showed a real killer instinct when he drilled a low shot from 20 yards out into the far corner of the net.

Barely two minutes later, Roscommon's Padraig Halpin was handed a second yellow card, giving Leitrim a man advantage and a three point lead with 12 minutes left. But the Rossies refused to lie down and two Dowd frees narrowed the gap as Leitrim started to kick balls over the sideline and lose possession easily.

Ciaran Cullen's pass in behind the defence seemed to promise a certain goal for Oisin Bohan but the St Mary's man stuck the ball over the bar. Sub Diarmuid Kelleher shot a great chance wide while James Clancy dropped a shot into the keeper.

Roscommon were missing chances or overplaying the ball as the game went into the five minutes of added time but Leitrim broke and looked to have a great chance to seal the win only for Sean Harkin's shot to fly inches wide.

With time almost up, a heavy challenge on a Roscommon player led to a free. Paul Carey's free looked from my vantage point as if it had gone wide but we were the wrong side. Leitrim officials were adamant it had missed the target but the flag went up, the scores were deemed level and the game went to extra-time.

A reprieved Roscommon started like trains, aided by the move of Jack Gilheaney away from midfield. Paul Carey fired over after just 22 seconds and missed a free while a cramping Ciaran Cullen also had a wide.

Roscommon won the game in the space of a minute - Dylan Ruane pointed after a patient move and when Leitrim lost the ball, a quick ball into James Fitzmaurice saw the Oran clubman fire to the net.

A Jack Gilheaney point after a long run was Leitrim's only score of the first period as Leitrim trailed by four. Three minutes into the second ten minute period, Gilheaney dodged his man and fired over and suddenly the crowd were back to life and when Mark Diffley fired over the gap was back to two points.

Barely a minute later, Gilheaney blasted a 55 yard free high over the Roscommon bar and there was only a point in it. Gilheaney put a free wide and Diffley shot wide and Roscommon broke as the game went into the two minutes of added time, Brian Derwin firing over the bar for a two point lead.

Back came Leitrim and Aaron Hoare defied all tiredness to blast a monster effort from the right wing over the town goals. Leitrim needed possession, they got it from the kickout and Roscommon fouled, leaving Leitrim with a long 54 yard free.

Mark Diffley showed real guts in stepping up to take but his effort flew well wide and the final whistle sounded to leave Leitrim heartbroken.

Talking Point - Lots to be happy with but the age old problem of Leitrim freezing with victory in sight reared its head.

Ref Watch - A frustrating outing from Paul Lydon, big calls going against both teams but both black cards were spot on.

Highlight - The manner Leitrim took the game to Roscommon and their spirit of adventure.

Lowlight - The fear that invaded Leitrim's play in the closing minutes.