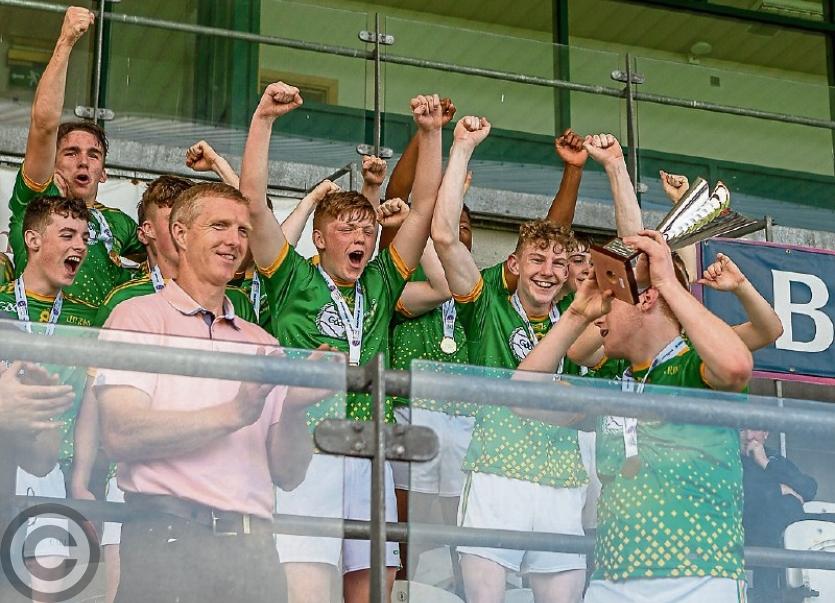 Let nobody say Leitrim clubs don't get enough football during the Summer as the 11 game Dunnes Bar Division 1 campaign becomes a sprint with a hectic schedule of games in the month of July.

With the Club Championship due to start on the weekend of July 26/28, clubs are faced with up to six rounds of League games starting tonight as the County Board endeavours to finish the League before the championship starts.

And with the championship so close, some teams are eager to make a statement with long time leaders Melvin Gaels surrendering top spot in the table after a hard fought 2-15 to 2-13 loss to Mohill who leap frog the Kinlough men into second place thanks to the head to head rule.

That left the door open for Ballinamore Sean O'Heslin's who are also unbeaten and they didn't disappoint as they overcame the tough challenge of a rejuvenated Glencar/ Manorhamilton to claim top spot in the division.

Ballinamore's 2-13 to 0-12 win puts them in top spot, one ahead of Mohill and Melvin Gaels with a four point gap back to fourth placed Glencar/Manorhamilton as the battle seems to be very much to avoid finishing the bottom four of the table at this point.

The north Leitrim men sit on six points, level with a St Mary's Kiltoghert team who had far too much scoring power for an injury hit Aughnasheelin, the Carrick men winning 0-20 to 1-9.

St Mary's meet Glencar/ Manor this Saturday coming in Boggaun, a win almost guaranteeing the winners their place in division one next year after the revamp comes into effect.

Aughawillan and Leitrim Gaels both did their chances of avoiding the bottom four the world of good with impressive victories at the weekend. Aughawillan handed bottom club Gortletteragh a heavy 3-19 to 0-12 defeat that leaves them three points adrift at the bottom of the table.

Yet so tight in the table that two wins and other results going their way would lift Gortletteragh out of the relegation spots and they have a game in hand over two of the teams ahead of them.

Allen Gaels gave their hopes of a top eight spot a massive boost with a welcome 1-8 to 0-9 victory over Annaduff, leaving them just a point adrift of the trio of Leitrim Gaels, Annaduff and Aughnasheelin.

Leitrim Gaels ensured that they would stay ahead of the Drumshanbo men with an impressive 1-13 to 0-10 victory over Fenagh St Caillin's who now move into the bottom three and looking down the barrel of a drop back to Division 2 next year.

Wednesday night sees an enormous game between Leitrim Gaels and Annaduff while Gortletteragh will desperately need a win over St Mary's to get their season going. Mohill take on Aughnasheelin in the third game tonight.

On Saturday, the big game is the relegation six pointer between Aughnasheelin and Allen Gaels.

The only top half of the table meeting is that of Glencar/Manor and St Mary's but with the games coming thick and fast, another full round is down for next Wednesday, July 10, the only guarantee is that teams will be well tested for the start of the championship at the end of the month. 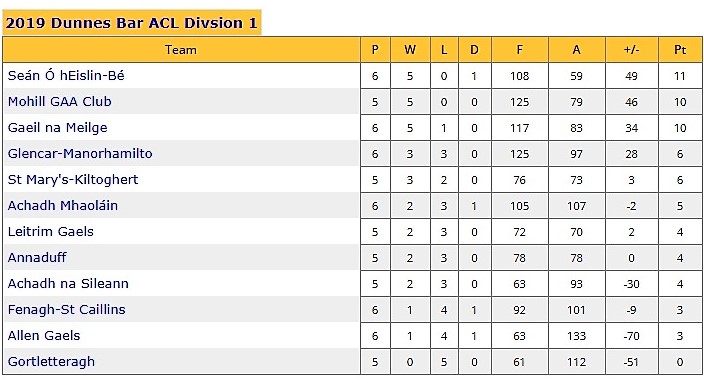 Just four games last weekend in a reduced programme of games in the Dunnes Bar Division 2 League but they still had a major impact on the possible final standings.

St Patrick's Dromahair, who started the league so strongly and looked set to be one of the four teams qualifying for Division 2 of next year's revamped leagues, but a draw against Cloone has seriously damaged their hopes. Dromahair led by nine points at one stage but a great fightback by a Cloone side who have won just two games in this year's campaign, saw them earn a share of the spoils on a 2-12 apiece scoreline.

Dromahair still lie in fourth place in the table but are just one point ahead of Carrigallen who had the advantage of a head to head meeting. Dromahair face Glencar/Manorhamilton, Aughavas, Eslin and Ballinaglera in their remaining four games.

Cloone's draw lifted them to tenth in the table, four points adrift with four to play and they could still be contention with their games against fellow strugglers Aughavas, Kiltubrid, Mohill and Bornacoola.

Aughavas almost caused a major shock when they pushed Drumreilly to the wire in a hard fought 2-10 to 1-10 victory for the unbeaten Drumreilly men. Drumreilly remain the only unbeaten side left in the Division but face some tough games in their remaining outings, starting with Drumkeerin tonight (Wednesday July 3) and also against fellow top teams Ballinaglera and Carrigallen.

Drumkeerin kept pace with the top two with a comprehensive 4-16 to 0-8 victory over Mohill's second string and a victory against Drumreilly would propel them into second place with five games to go. Drumkeerin would appear to have a slightly easier run-in with matches against Drumreilly, Carrigallen, Kiltubrid, Aughavas and Eslin to come.

Kiltubrid and Bornacoola had a hard fought game, the Bors securing a third win of the campaign to really lift themselves up the table. They now lie on six points, three behind fourth placed Dromahair but with some interesting games to come. The Bors face Mohill's second string next Sunday before taking on Eslin, Drumreilly and Cloone in their final few games so a run isn't out of the equation.

Kiltubrid have a tougher ask to mount a charge for the top four places. They take on Cloone next Saturday where a loss would almost certainly end the hopes of the losing side. After that they take on Drumkeerin, Carrigallen and Aughavas in a tough finish to the campaign.

Ballinaglera, who have eight games played, are just one win away from securing a top four place and they face Drumreilly in a top of the table clash next Saturday. 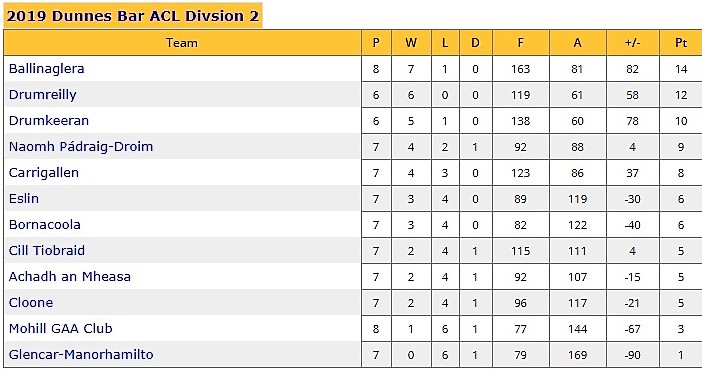