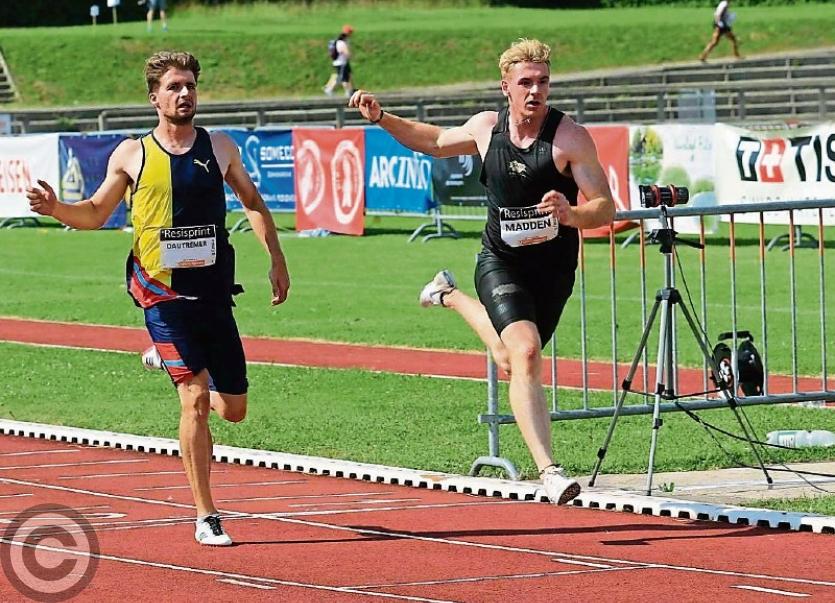 Speed must run in the water in Mohill as two of the town's speediest residents impressed on foreign soil last weekend.

Eanna Madden showed great strength to win his 200m race at the meeting in La Chaux-de-Fonds in Switzerland last Sunday, clocking a remarkable time of 20.87 despite running from the tight lane one.

Unfortunately for the Carrick AC sprinter, the wind was above the maximum allowable limit of two metres per second with a reading of 2.8m/s. However, it does show that Eanna is starting to hit top form as we approach the business end of the track & field season.

On Saturday, Alannah McGuinness donned the Irish vest for the first time when she competed over 100m at the Junior Gala in Mannheim. The Carrick AC athlete clocked a time of 12.20 seconds, her second fastest time ever.

The young Mohill woman felt that she didn't get to produce her best and she and her Irish teammates were denied the chance to run the relay as an injury to one of her team-mates meant there were unable to field a team.

Alannah will run at the Athletics Ireland Irish Life Health National Junior and U23 Championships in Tullamore next Saturday.

No medals but some excellent performances from Leitrim athletes at the Athletics Ireland Children's Games and U12 & 13 Track & Field in Tullamore last Saturday.

Mark Hazlett recorded a fine sixth place finish in the U12 Long jump with a best jump of 4.03m while the North Leitrim AC athlete also reached the 60m Final, clocking 8.69 in the heats and 8.77 in the final where he finished an excellent eighth.

The U10 team of Anna Trench Winston and Poppy Doherty also finished sixth in their 60m event, clocking an excellent time of 19.95.

Carrick AC's Patrick Kennedy finished 12th in the U13 600m in a time of 1.47.40 and he later teamed up with Mark Tansey, Cathal Enright and his brother Patrick to finish fourth in their 4 x 100m relay heat.

Drumshanbo's U9 Turbo Javelin team of Conor McGowan and Darragh McGourty threw a combined 16.46 to finish 13th overall in their event while the Carrick U12 boys relay team of Michael O'Grady, Caoimhin O'Sullivan, Sean Keaney and Hugh McGovern finished a good fifth in their heat.