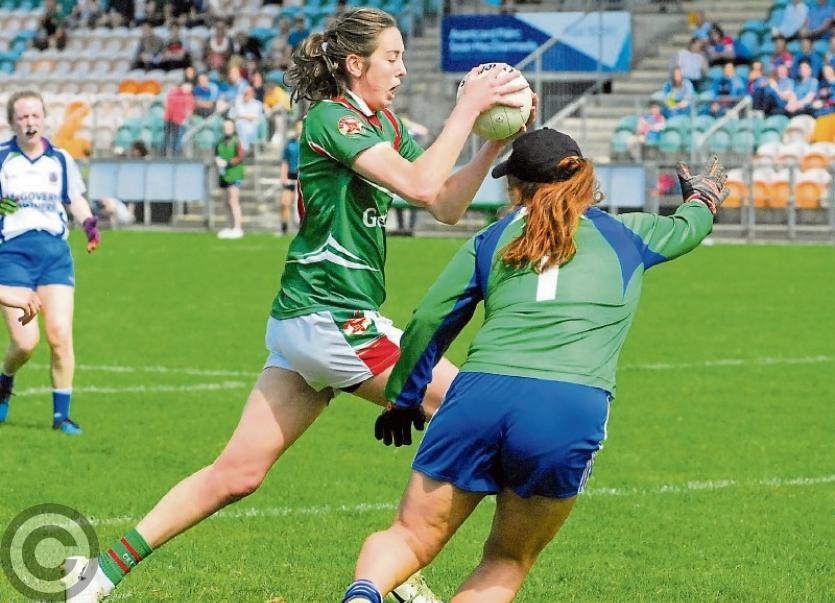 Aine Tighe finds the net for Kiltubrid despite the efforts of the St Joseph's keeper Picture: Willie Donnellan

She may be heading off to play Aussie Rules next October but it was Aine Tighe who ruled last Sunday as Kiltubrid claimed the Ladies Division 1 League crown in Avantcard Pairc Sean Mac Diarmada.

Aine Tighe's tally of 4-4 is impressive all by itself but the manner in which she took control of this game and won it for Kiltubrid shows just how good of a player she is and what a treat the Aussie Rules fans are going to have next winter.

With Tighe acting as chief executioner, Kiltubrid could play solid defensive football and never get pulled out of shape and it was their ability to make the most of Joseph's mistakes that proved the difference between the teams.

Three of Kiltubrid's goals came when the ball bounced off defenders, the bar or the keeper but Kiltubrid never gave up the same sort of goal scoring chances that St Joseph's desperately needed to get a result from this game, particularly as Kiltubrid were so resolute in defence.

Kiltubrid started strongly but saw Aine Tighe miss a goal chance and it was St Joseph’s who took the lead with two excellent Michelle Heslin points. In a sign of things to come, St Joseph’s just about scrambled a Michelle Guckian free away with Aine Tighe putting the ball over.

Guckian did add a free on seven minutes but St Joseph’s looked in a different class as they hit four unanswered points from Michelle Heslin (2), Kerrie Lynch and Deirdre Moran but a Michelle Guckian point gave Kiltubrid some hope.

The game changed on 18 minutes when Kiltubrid pounced on a poor kickout, a pass behind the defence found Aine Tighe and she rounded the keeper for an easy goal.

Celine Shortt replied with a great run and score but Tighe pounced for a second goal, a one-two with Siobhan Kelly and some brilliant footwork outpacing the defence and scoring a fabulous goal.

Kiltubrid got a bit of luck for their third goal, a Michelle Guckian shot dipping late, bounced off keeper Kiera Masterson and Tighe pounced for her hat-trick.

A shell shocked St Joseph’s couldn’t believe it as their four point lead was turned into a five point deficit but they finished the half in style, two excellent Carmel McCartin points either side of a Kerrie Lynch goal that came when a high free spilled off the defender’s hands and into the net.

It meant the scores were level at the break, 3-3 for Kiltubrid to St Joseph’s 1-9 and the Aughavas & Carrigallen combo were back in front with another good Carmel McGovern point immediately after the break.

But Kiltubrid took over - Aine Tighe had a goal disallowed for a square ball infringement and then missed a great goal chance but the goal did come on six minutes, another long ball bouncing off the keeper and Siobhan Kelly was on hand to blast home from close range.

It was tit for tat over the next five minutes with St Joseph’s points for Shortt and Lynch matched by scores from Aine Tighe and Siobhan Kelly before Tighe cut loose with two points in the space of a minute.

The game was over a minute later - Ciara McWeeney was desperately unlucky after her shot rattled the crossbar but Aine Tighe was on hand to tap the loose ball to the net. That put Kiltubrid seven points ahead with just over ten minutes of normal time remaining.

St Joseph’s kept trying to get a goal but Michelle Heslin and sub Leona Trainor both had shots saved by Miranda Foley and Jenny McKiernan but Kiltubrid kept the scoreboard ticking over with points from Guckian, Tighe, Emma Guckian and Isabella McKeown with just two scores from McGovern and Lynch in response.

TURNING POINT - Aine Tighe's third goal really hit Joseph's hard as it undid a lot of their good work while her fourth goal, 11 minutes from time, ensured that there would be no way back for Joseph's.

TALKING POINT - Kiltubrid showed that as long as they have Aine Tighe in their ranks, they are a threat to any team. They can play a strong defensive system safe in the knowledge they can hit any team on the break. For St Joseph's, fuel to the fire for their championship hopes but they missed Bronagh O'Rourke's scoring power last Sunday.