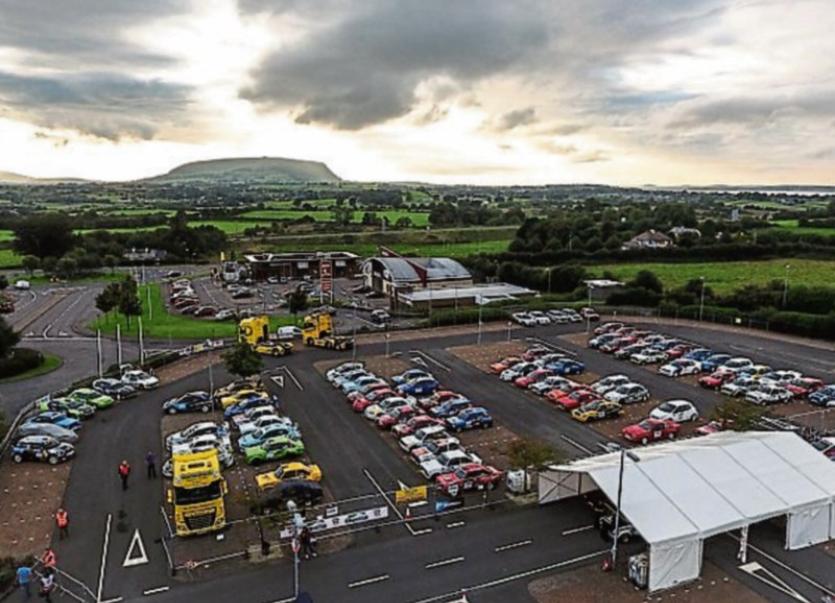 The official launch of the 2019 Faac simply automatic /Sligo Park Hotel Stages Rally took place on the banks of Glencar Lake at the Teashed Cafe. The rally takes place next Sunday, July 14.

A large crowd were in attendance including the whole organising team, representatives from all the sponsors and a number of dignitaries and local community representatives.

The evening began with a photoshoot of sponsor rally cars under the Motor Club arch with the still lake as a backdrop and the sun setting in Sligo bay in the distance.

Opening the proceedings back at the Teashed, Joe Corcoran described the format of the event and thanked complete organising committee on behalf of the club for their dedication over the last months in putting the bones of the event together.

He congratulated the appointed Clerk of the Course Rosemary Walsh for taking on the official role for the event and Ultan McGowan as Deputy. Rosemary addressing the large attendance and thanked all those who contributed to bringing the event to this point.

She particularly thanked those who got their entries in on time and were eligible for the draw on the night. She acknowledged the support and understanding the residents and businesses along the route which allows for the closing of roads.

Speaking briefly on behalf of the Triton National were Brendan Flynn, on behalf of Sligo Pallets Border, Andrew Mullen and on behalf of Top Part West Coast John Tynan.

Following some delicious light refreshments put on by hosts Helen and Jonathan at the Teashed, the draw took place for the €500 entry voucher sponsored by the Carty Group which was won by Brian Moore, this was following the first person being drawn was event sponsor Ciaran Phelan and he agreed to pull again, a very sporting gesture.

Rosemary announced a totally new unique feature for the event, the first event in the country to provide it, an APP made available to competitors including regular updates.

Of course it was reaffirmed that a further three draws takes place at drivers briefing , one each for main field, class 16 and 16A, sponsored by National Automation.

Overall numbers are currently coming close to the one hundred mark, with entries still being accepted right up until the Friday before the event. For further information & updates www. connachtmotorclub.com.