Leitrim’s 1994 trailblazers I salute you! 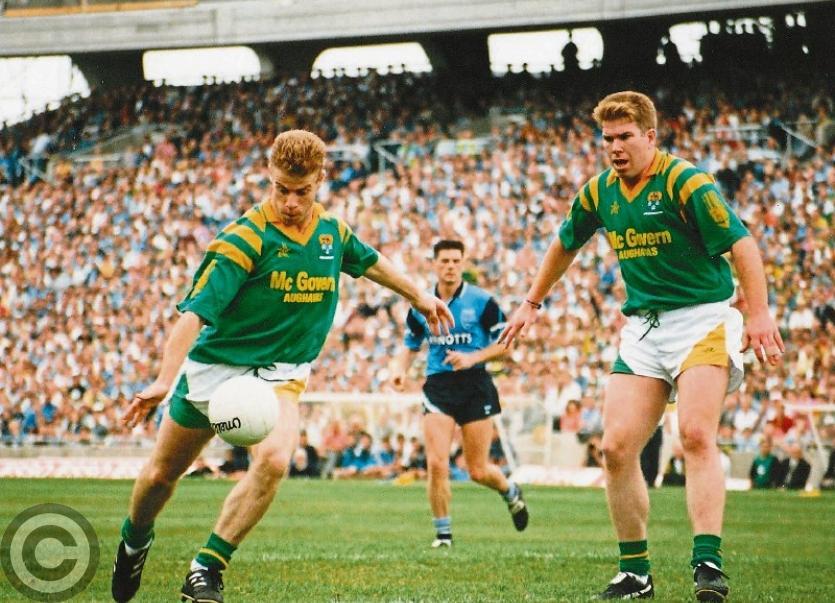 Padraig Kenny takes a shot for Leitrim in the All-Ireland Semi-Final in Croke Park against Dublin with teammate Brian Breen in support Picture: Willie Donnellan

Nineteen Ninety-Four…. You need provide no context to someone from Leitrim when you mention that year.

It was the year that modern Leitrim came of age, opened its shoulders and declared to the other 31 fiefdoms: ‘We are in this game too you know!’

Charlie McGettigan got the ball rolling in April when he and Paul Harrington Rock ‘n’ Rolled every Kid in The Point theatre to claim Ireland’s third Eurovision Song Contest on the trot. How proud we were, and how well his son Shane took the ribbing we gave him at every training session for the rest of that year. He would enjoy a second christening as Rockers. It suited him, not just because of his father’s famous song but because he was solid as a rock in defence and cut from stone.

We had a great crew on the U21 panel back then and a good scatter of us were students in Dublin. Another Allen Gaels man Eoin MacHale was the proud owner of a Mini, which became the team bus for the Dublin-based brigade.

Arriving sardined at training (usually in Clanna Gael Fontenoy’s in Sandymount) we peeled ourselves out of the tiny vehicle to the amazement of anyone who happened to be in the vicinity. The world record for the number of people in a Mini is 28. We probably maxed out at eight but included were the likes of Gareth Phelan (Melvin Gaels) and Padraig Flynn (Fenagh), no small units, and our gear bags to boot.

Thank God we were young and limber for Frank D’Arcy was waiting for us and would test every fibre in our hamstrings over the next hour and a half.

We were training with the Dublin-based senior panel members and it was a brilliant experience. Not just because you were forced to raise your game and push yourself to keep pace with them, but because they were a great posse.

There was a bond between them that was never quite replicated on any subsequent team I played with. It’s clear looking back now that the experiences of winning the All Ireland B title in 1990 and Connacht U21 titles in 1991 jelled that group together and whetted their appetite for success.

The timing of John O’Mahony’s arrival was perfect to capitalise on this hunger, cement an already tight-knit group, and to forge an indefatigable belief in their ability, their destiny.

Johnno was a big fan of in-house matches and I both loved and dreaded those encounters in Pairc Sean when he called in the U21s to make up the numbers. As a man with a reasonable engine I would either be dispatched to wing forward to try and keep Noel Moran occupied (I’m convinced to this day he is half Gazelle) or would be dropped into midfield to try and make a nuance of myself.

Mickey Quinn was on another level. He had this hang time that an NBA player would die for. He was cut from steel and had a competitive streak and stare that would cause Roy Keane to cower in the corner.

The lads couldn’t have been more welcoming to a group of young guttersnipes like us. In Dublin the likes of Liam Conlon, Jason Ward, Declan D’Arcy, Colm McGlynn, and all the lads really, went out of their way to make you feel part of the set up. Frank D’Arcy played a major role in that too. He always struck the balance on the training field between plenty of banter and serious hard work. I have huge respect for that man.

Being Dublin based, we spent a lot of time on the road travelling home for training and here, there, and everywhere for matches. That would increase exponentially as I progressed on to the senior ranks.

I had many chauffeurs (including the legend Brendan Harvey in whose company time always flew by, and Eimear McGovern, who would collect Shane McGettigan and I at the Dublin Corporation buildings on the Quays) and countless conversations and banter.

Declan D’Arcy would collect me on the canal on the corner of Barge Pub, as he left his home in Sandymount behind to head for his father’s homeland. I’d learn a lot from him and always sought to emulate his professional attitude and work-ethic both on and off the field. Football was a way of life for Declan and that appealed to me.

When travelling from Kinlough, Aidan Rooney was subjected to my company more often than he probably cares to remember, being the only north Leitrim man flying the flag at senior level back then.

Travelling back from Carrick-on-Shannon to Dublin after games, Padraig Kenny’s pre-NCT roadworthy Nissan Micro was a mainstay. Slow and steady as she went. We would leave Carrick an hour before the rest of the Dublin based lads could be extracted from some of the local hostelries (Paddy’s and The Anchorage being their favourites).

Then somewhere between Enfield and Lucan we would see them fly by us in their gleaming modern vehicles, gesturing pleasantries, of course. When the occasion allowed, Major Tom’s off Stephen’s Green was the destination on a Sunday night, where our initiation into Leitrim GAA life continued unabated.

Looking back now it’s hard to fathom how young the majority of the 1994 team were. They seemed so much older than us, yet Declan was only 24 years-old when he raised aloft the Nestor Cup with Tom Gannon.

Seamus Quinn, who would remain a team mate until 2004, was just 20-years-old when he won his All Star. His recovery in the Connacht Final from the mistake that gifted Mayo their goal is what I remember most from the game. It speaks volumes about the man and his character, as does his decision to continue contributing as both a coach and a referee after he finally hug up his boots as a player.

Winning the Nestor Cup – and the route they took in beating the big three – was a truly remarkable achievement by that group of players.

But joy they brought and the legacy they left are a far more significant than any piece of silverware. They rewarded the county’s faithful supporters and reminded every Leitrim footballer that they are as good as any raised in another county and that history more than ability is often what holds us back.

They discarded generations of baggage from Leitrim shoulders like bags of turf that were then used to fuel the bonfires that heralded home our victorious heroes to every corner of the county.

It’s vital that we don’t allow 1994 to drift into the realms of mythology the same way 1927 did before Leitrim’s second coming 67 years later. What that group of players achieved was real and tangible and was accomplished on the back of blood, sweat, and tears.

The modern generation of Leitrim players must not look back in envy but must seek to carve out their piece of history and achievements safe in the knowledge that those who came before them have blazed a trail that they may follow.