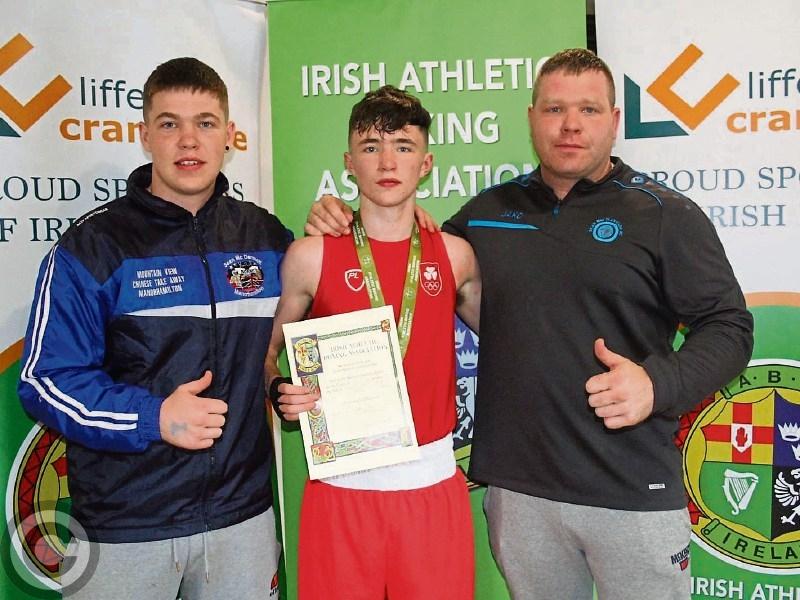 Dean Clancy pictured following his Irish U18 bantamweight win in the National Stadium Dublin on Saturday with his brother Jason on the left and father, Jason on the right.

Seán McDermott BC’s Dean Clancy was an emphatic winner of the Irish U18 bantamweight title last Saturday when he scored a 5-0 victory over Kerry boxer Barry O’Connor.

Saturday's victory was Dean's seven Irish title and it also ensured his selection for the Irish team for September’s European Youth Championships in Sofia, Bulgaria where Dean will be seeking to improve on the silver medal he won last year.

Dean’s father and mentor Jason, who accompanied him for Saturday’s Irish title fight in the National Stadium, said Kerry’s Barry O’Connor “is a European medallist, so he was no pushover.”

But “Dean was just on a different level; his footwork and hand speed was outstanding. I came up with a game plan of keeping (Dean) moving in and out – using speed – as Barry was a very tall and awkward southpaw; so movement was the key.

“Dean stuck to the game plan and got the victory. Leading up to these championships we had a tough camp as Dean was studying for his Leaving Cert, which didn’t finish until June 20; so we had less than four weeks to get ready.

“I made up a plan which consisted of training three times a day for the first two weeks to get his fitness back up; it was tough on him but he got in great shape in such a short time; it’s a credit to him” Jason added.

Dean is already back in training according to his Dad: “He took Sunday off and is now back in training for the European championships in September. This will be Dean’s third European championships having taken home silver the last two times. So he is determined he will bring back the gold. This it’s the last time Dean will be fighting with a head guard as he will be turning 18.

“He will be joining the senior ranks where boxers are in their 20s. He’s looking forward to the challenge” Jason said as he looks forward to Dean winning a European gold medal and boxing title in early September.