"I never thought I’d win a medal in outdoor nationals never mind win a title ..... so three in a row is unbelievable" 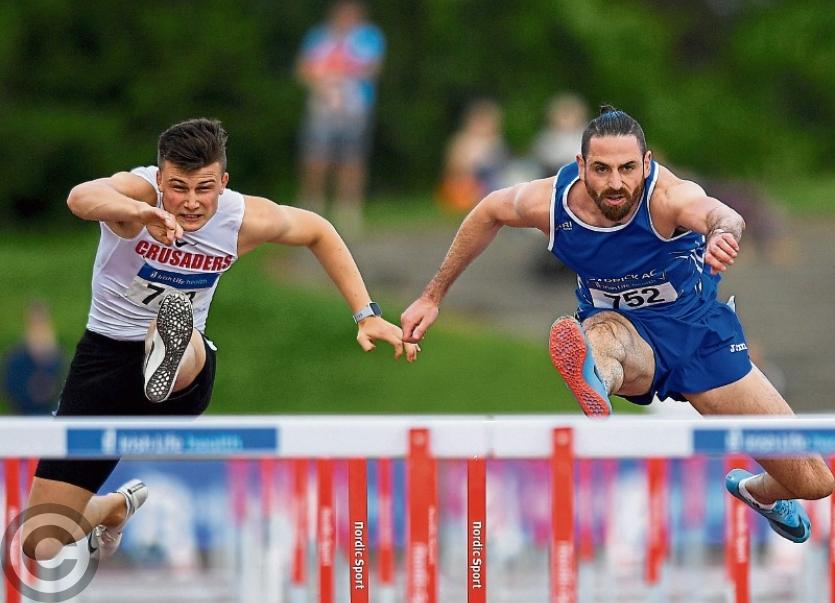 After an injury plagued season, Gerard put it all behind him as he defeated Matthew Behan of Crusaders AC in a time of 14.26 seconds to 14.35. And speaking to the Observer, Gerard could not believe that he had won three Irish titles in a row!

“Last year, I was probably up there to be favourite but this year, I was really battling to get over a few injuries and stuff. I’m absolutely thrilled to pull it out of the bag and get across the line first.”

Gerard competed in the European Games in Minsk at the end of June but doing so put defending his national title at risk and it took an awful lot of work to make the starting line last Sunday.

“Realistically, I probably shouldn’t have went to Minsk with the way my achilles was. I was happy with the way I performed in Minsk, I got some points for the team but when I got back, I had three weeks of pretty much no running, just gym and rehab.

“Once I got through that, I got back hurdling the last two weeks and this is the first week I’ve been able to freshen up all Summer. Thankfully the body responded and because my achilles has responded so well, I was able to hurdle much stronger in the second half of the race than I have been.

“I was kind of thinking was I lacking a bit of endurance but it was literally that I couldn’t run as tall as I needed because I couldn’t hold myself in that position.”

The Leitrim athlete didn’t underestimate the challenge posed by Matthew Behan either - “Matthew is always a really good starter but I knew after hurdle one I was closer to him than I normally would be so that caused him to panic slightly too and that helped me too.

“But just being composed and patient through the second half of the race is where my strong suit is.”

Sunday’s victory also saw Gerard selected for the Irish team to compete in the European Athletics Team Championship First Division in Norway from August 9-11, and his season is only getting going if Gerard’s words are anything to go by.

“Today proved I am in good shape so we can really get a couple of decent sessions in and hopefully be off to Norway. Everything was relying on today to see how it went, see how the body felt.

“There is the Belfast International on Thursday which I might do, I’ll see how the body responds. But I can get some hurdles sessions in now and there are a couple of races abroad that will fill out August.”

For Eanna Madden, it was a disappointing weekend as a slight strain saw him ease up in his 100m heat on Saturday in order to save himself. The decision proved a good one as Eanna was picked for the 4 x 100m squad for the European Team championships in Norway along with O'Donnell.

Ballinamore AC's double Olympian Colin Griffin turned in an excellent time of 32.31.76 to finish 15th in the 10,000m on Saturday, a superb run for an athlete aiming for the marathon while Carrick AC's Cathal McElgunn ran 52.76 in the heats of the Men's 400m to complete Leitrim's interest.