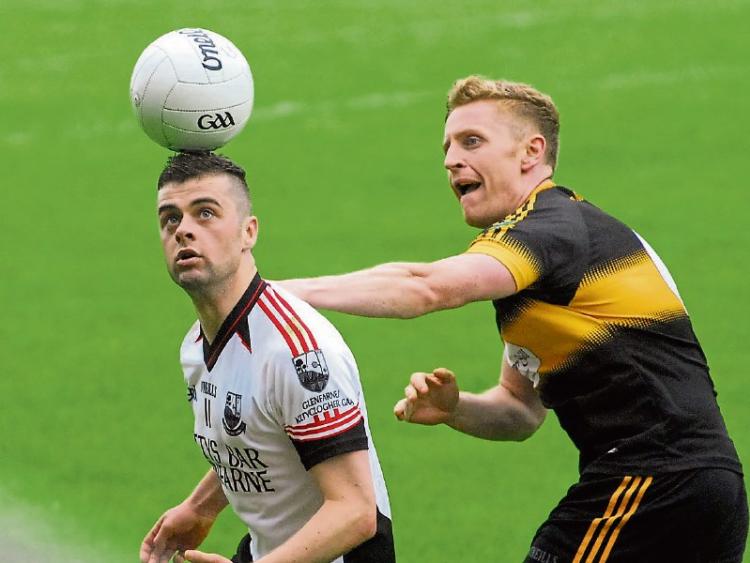 Balancing act! A Glenfare/Kilty player seems to balance the ball on his head against Bornacoola Picture: Willie Donnellan

Carrigallen had a good win over Cloone but they will find Drumkeerin a much tougher. Drumkeerin will want Cathal McCauley back as quick as possible but they showed good scoring power without him. Carrigallen beat Carrigallen just over two weeks ago in the League and that should drive them on. This will be tight and really could go either way.

This is the tie of the round between the two favourites for the title. Nothing much to pick between them but the fact that Leitrim Gaels are missing two Moreton brothers may tip the scales Annaduff’s way who will be concerned with their struggle against Drumkeerin so this one is going to go down to the wire with Annaduff to sneak it.

Bornacoola were devastated by their inability to beat Glenfarne last Sunday and it may cost them against an Eslin team which doesn’t seem to be relying solely on Conor Beirne. He is a huge part of their team and occupies a lot of attention but the likes of Jamie Stenson and James McNabola are beginning to emerge - Eslin should take this one.

Aughavas surprised many and almost surprised Ballinaglera. Glenfarne/Kilty showed great spirit to fight back and were very unlucky not to win the game. Nothing much in this one but Aughavas get the nod but it may be a lot closer than you'd expect.

Ballinamore’s second string were a disappointment last weekend and Cloone should pick up their first win of the campaign here next Sunday.

Ballinaglera got a big scare late on from Aughavas and that might serve them in good stead against Kiltubrid who looked in big bother at halftime but really chased Eslin home in their outing. Ballinaglera get the dreaded vote but Kiltubrid can use this contest as a springboard with some crucial games coming.