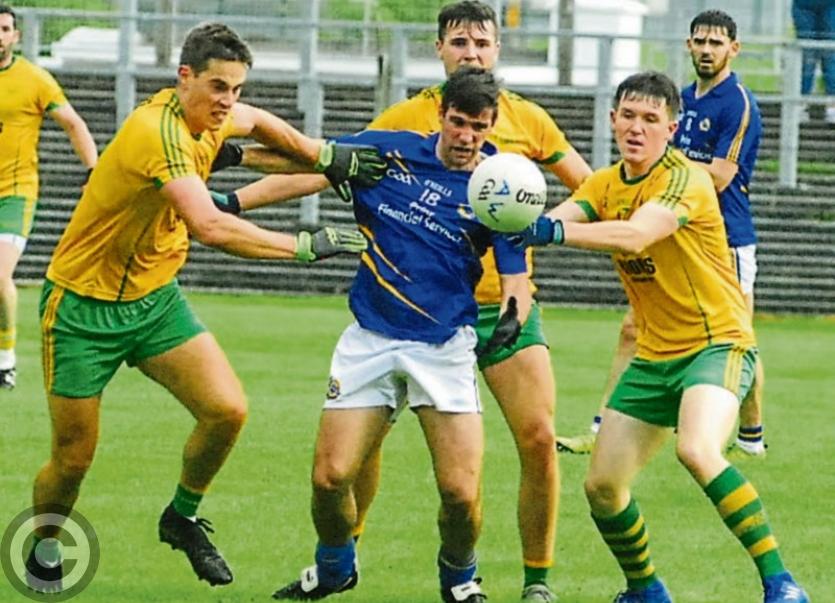 Any time you win, it is important but a win next weekend in the Leitrim Club Championship brings with it added momentum and a boost in confidence as clubs face into their first break.

With the Senior & Intermediate taking a break after three rounds, a win here carries the extra boost as clubs look ahead to the last two rounds, be they battling for a place in the quarter finals or trying to avoid relegation.

One area of concern has been the sparse attendances at the games. Television games aren't helping so you wonder about the wisdom of scheduling the majority of games against an All-Ireland Semi-Final next Saturday evening.

The break should have been taken this weekend but it will matter little once the whistle is sounded on Saturday. Below we take a brief look at the games this weekend:

This is a huge game for Fenagh if they are to avoid the bottom two. Drumreilly have been the surprise packets of the Senior grade and a win here would almost certainly guarantee them a quarter-final spot. Fenagh have been unlucky to come up against the big guns in their first two games so the pressure is on here. I'm not sure who to go for here but I give a slight edge to Drumreilly.

Another Saturday night monster clash in Carrick. Will it be the damp squib last Saturday's game was or will these two teams go at it? Both are scoring for fun but a few injuries, like that of James Glancy, may hamper the north Leitrim men. Mohill are scoring for fun at the moment but this is a test they will want to pass - it could end up in a draw but Mohill may just shade it.

Hard to believe that this is a relegation six pointer but it is as both teams have lost two games and seem to have lost the aura they used to possess. Melvin Gaels' woes are baffling with the young talent they possess but the question is will Jack Heslin be available to Gortletteragh after he exited the Manor loss at halftime. If he is available, I'd tip Gortletteragh but if not, the Kinlough men get the vote.

Hard to write off a team but when it comes to an Aughawillan team smarting from a loss to Ballinamore facing a Dromahair side who have already lost twice, it is impossible not to go for the defending champions. Dromahair showed spirit and signs of life against Allen Gaels but their big battle is going to be against Aughnasheelin. Champs to get back to winning ways.

This is an intriguing clash. Ballinamore probably moved into the favourites position after their hard fought win over Aughawillan but they face a quick moving and dangerous St Mary's team. The Carrick men have a lot of good young talent coming through and they won't be far off in the knockout stages but they haven't come up against someone with this range of options and dangers. I have to go with Ballinamore in this one, but it might be tighter than expected.

Sunday's only senior game may just be the biggest of the weekend. Aughnasheelin have shown enough in their two outings to suggest they have a chance of avoiding relegation but they need to start delivering right now. If they can get even half of their injured troops back, they will pose Allen Gaels lots of problems. The Drumshanbo men are somewhat enigmatic at the moment, mixing some good performances with lapses in form. If they can get enough of the ball to James Flynn and Caleb Duffy, the scores will come but they face a tough battle against Conor Cullen and Aaron Hoare. I really don't fancy picking a winner here but if Sean McWeeney is back, I'll give the nod to Aughnasheelin.

Important game here. Drumkeerin need a win to get their season going and they have been close. Cloone had a good win last weekend but you feel that Drumkeerin's greater need should drive them to victory.

Another intriguing game here with Carrigallen unbeaten against a Gaels team not at full strength but needing the victory. How the Gaels react to losing to Annaduff will tell us a lot about them but Carrigallen have the momentum here and should take the win.

This game has potential. Ballinaglera are unbeaten while Eslin let a win over Bornacoola slip away. Both have played Kiltubrid, Glera perhaps more convincing winners and that might just be enough in this one.

Aughavas are proving to be one of the surprise packets of the competition with two strong performances. Bornacoola had two draws and are looking to fire their season but Aughavas look in better shape at the moment, they get the vote.

This is a relegation decider - victory here is a huge boost towards safety, relegation a much bigger possibility with a loss. Hard to know who has the edge, Glenfarne might just sneak it could go either way to be honest.

Annaduff should have too much strength here for Ballinamore's second string who have suffered two heavy defeats so far.