Building for the future - in every way 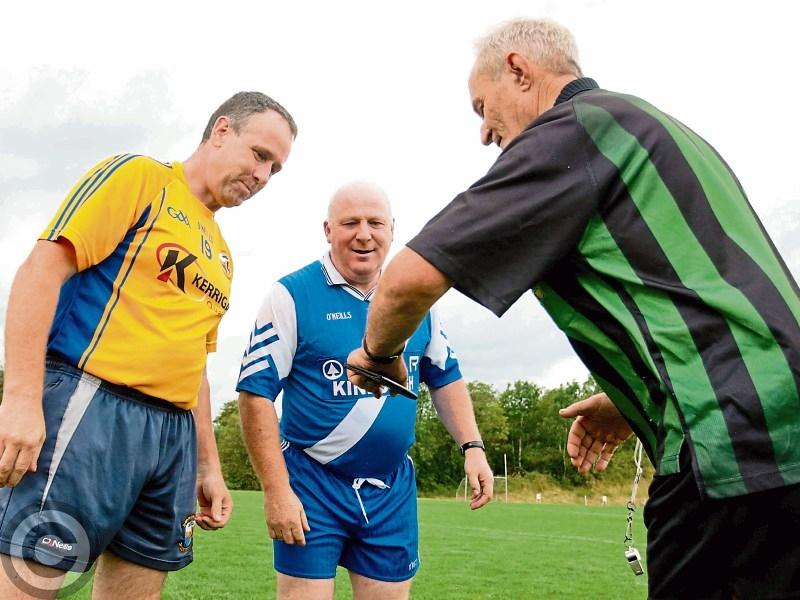 Paddy Kane lays down the law to Shane Devaney & Simon Foley before the Golden Oldies match at the opening of Glencar/Manorhamilton GAA Club's new facilities at Boggaun Picture: Willie Donnellan

The weather didn’t cooperate on Glencar/ Manorhamilton’s big day last Sunday, in fact it was bloody awful as the rain poured down on the official ceremony to mark the opening of the club's new facilities but it was still a day when the future looks bright for the north Leitrim club.

The opening of a new club grounds in Leitrim has become a rare, rare thing in Leitrim GAA circles over the past 20 years but for Glencar/ Manorhamilton as a club and a community, the phrase “building for the future” has never been more apt.

Sunday’s official opening of the new pitch at Boggaun outside Manorhamilton on the Carrick Road was a great opportunity to look back and mark just how far the club has come since they were first founded 50 years ago this year.

Those heroes of the past were feted and honoured on Sunday and all over the weekend while the heroes of 1999, who won the Leitrim Senior Championship, were remembered too by an enjoyable challenge game with neighbours Melvin Gaels, a clash featuring the players from that great era - although we use the word clash lightly as it was more of a fun game than what used to occur between these two great rivals!

Two Senior Championships in the first 30 years reflects the fact that for long periods, Glencar/Manor were an afterthought when it came to the Leitrim Senior championship, not regarded as true contenders.

That’s all changed and bringing the Fenagh Cup home to Manorhamilton between 2008 and 2011 marked that team down as one of the greatest ever in Leitrim GAA history. But their legendary four-in-a-row team didn’t happen overnight and years and years of work went into delivering those four titles and three more final appearances in the years that followed.

But it is not just football that has excelled as Glencar/Manor have definitely embraced the “One Club” philosophy - their Ladies team might have missed out on the Senior Championship last year but they are an emerging force and nobody is betting against them lifting the crown soon.

Their hurlers provided nine of the Leitrim panel that claimed this year’s Lory Meagher Cup this year in Croke Park and it doesn’t seem to affect their footballers’ chances, two big wins so far in this year’s championship emphasising once again that they will be back in the mix for the Fenagh Cup.

On an aside, Gerry McGovern had an interesting observation during his speech to officially open the pitch at Boggaun. The Connacht GAA Council president reminisced about Cloone opening their own new facilities, what is now St Mary's Park in Cloone, back in 1980 and talked about how all the work that went into opening the new pitch translated into Cloone winning the Senior Championship that year! Certainly a lot of folk in Manorhamilton would like to replicate that feat!

Yet it is the future that occupies the minds of those driving Glencar/Manorhamilton at the moment - Sunday’s launch is just the start for the north Leitrim club as the new dressing room structure is just a small part of a much bigger building.

And it is going to be needed - 160 kids took part in the club’s own Summer Camp last week, a truly remarkable statistic and a sign that the club are mining the talent in the area.

Few clubs in the county can compete with those sort of numbers and if they maintain the work that has transformed them, then the building that was officially opened last Sunday is definitely a building for the future!