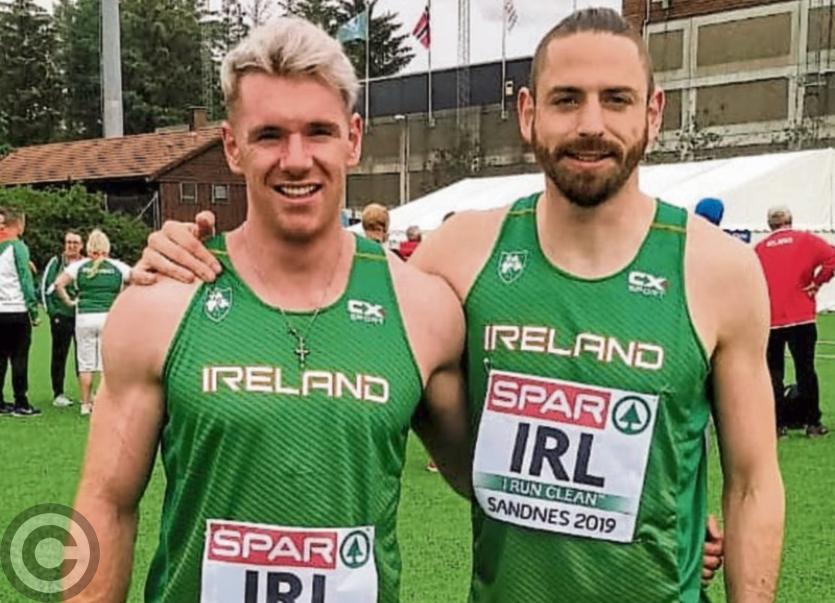 The Carrick-on-Shannon AC duo both saw action in individual events with Eanna a late replacement for the injured Stephen Gaffney in the 100m while Gerard was in action in the 110m Hurdles.

The event, held in Sandnes in Norway from Friday to Sunday, saw Ireland compete against 11 other nations with points awarded for each finishing position. With four nations being relegated, it meant that every point was vital for Ireland to retain their place in the First division.

Unfortunately for any athlete looking to run fast times, the wind played havoc with times at the Norweigian venue with both of Gerard and Eanna's two races into a strong headwind.

That secured four points for Ireland and Gerard, while a little disappointed with the time, recognised the importance of the overall picture for Ireland: “My first goal was to make the final, and I was happy to achieve that, especially is such tough weather conditions.

“In the final I was a bit disappointed not to finish a place or two higher, but happy to pick up four points for the team, as it really came down to the wire to secure our place in the 1st league for 2021.

“A great experience overall and the whole team really came together to push each other on to the best performances possible all-round.”

Eanna ran 10.77 into a minus 1.3 m/s headwind in the 100m heats to qualify as fifth fastest for the final. The wind got even stronger on Saturday, registering minus 2.6 m/s, and it hit times hard with the Mohill man running 11.05 for sixth in the final.

Eanna also ran lead off leg for the 4 x 100m team that initially finished sixth but were moved up to fifth overall after the Dutch team were disqualified and he was happy with how his weekend went: “It was an amazing experience and as always an honour to represent Ireland at this years European team championships

“I wasn’t initially selected to run the 100m individual event but, due to injury, I was called up the morning of the heat. It was short notice but I knew I had to prepare myself mentally for what was ahead.

“I knew leading into the 100m heat I was ranked slowest out of all the athletes based on seasons bests and personal bests. My plan was to just try and beat three athletes and be in with a chance of making the final. I finished third in my heat securing an automatic qualification into the final.

“I was delighted with the result and couldn’t wait to run the final the next day. I finished sixth in the final and am content with the result. Being ranked slowest athlete over 100m in the build up and finishing sixth was a good result and I performed when I needed to in helping team Ireland retain their position in division 1.”