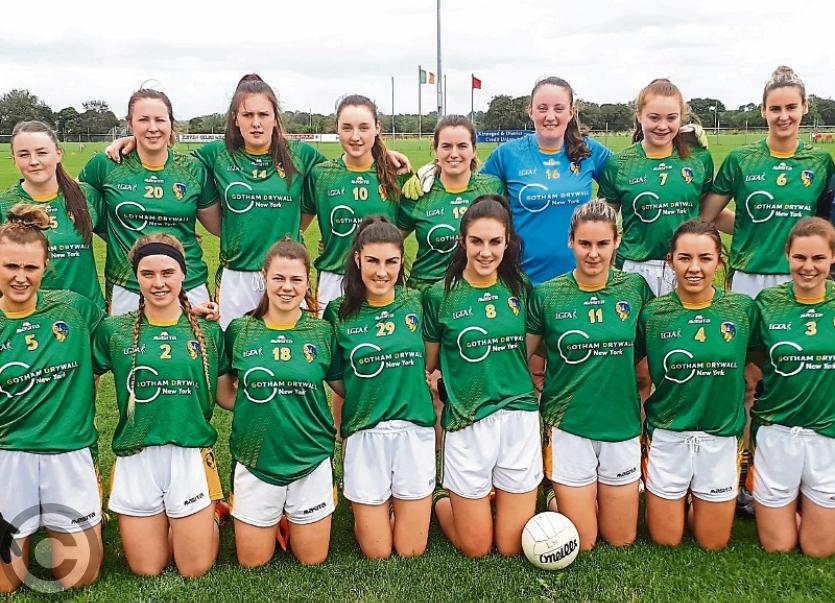 There may have been very, very few Leitrim supporters there to witness it but the Ladies senior team stood tall and delivered their best performance by far last Sunday in Kinnegad to secure their place in the 2020 TG4 Intermediate Championship.

With no more than 15 supporters cheering on the green & gold at the Westmeath, only five subs and without captain Clare Owens due to injury, it would have been very tempting to throw in the towel and surrender to defeat.

Some felt it would be in the Ladies best interests to go down to the Junior ranks, to win the lower grade and progress but not these players who, when the chips were down, showed that there remains a strong sense of pride in the county jersey and no small amount of skill.

Led by the exceptional Carla Le Guen, Leitrim dominated this game for long, long periods and with the two sets of O'Dowd and Heslin sisters wreaking havoc on Wicklow, the Leinster county crumbled under Leitrim's powerful running and refusal to accept defeat.

Leitrim got off to a blistering start with two goals in their very first attacks. The first came after a Waterford attack was broken up, Michelle Heslin took off on a long run and seemed to be shooting for a point but the ball dipped and ended up in the Wicklow net.

Barley a minute later, Carla Le Guen started off her stellar display by intercepting a pass. Her run and pass found Edel Kelly who shot low and accurately to the Wicklow net for the perfect start. Wicklow came back with an Amy Murphy pint but Vivienne Egan swept over a free.

The tit for tat continued for most of the half with Sarah Delahunt, Meadhbh Deeney (2) on target for Wicklow with Carla Le Guen, Egan and Carmel McGovern replying for Leitrim, Egan seeing a shot saved by the keeper while a goal bound Laura O’Dowd shot swerved and hit the post.

A third goal came on 21 minutes - good work from Aine Heslin and Aisling Quinn freed Eilish O’Dowd and she finished calmly to the net. Wicklow hit back with a Deeney point but Leitrim’s response was a goal from Laura O’Dowd as she got on the end of a great passing move before blasting to the net.

Eilish O’Dowd with two and Vivienne Egan added points before Sarah Delahunt finished the first half scoring to leaving Leitrim 4-7 to 0-6 in front. Delahunt started the second half with an early point as Wicklow missed a few good chances, including an Aimee Maher shot that was blocked by keeper and defence.

Wicklow did get a goal when Delahunt produced a great finish on six minutes but Leitrim’s response was devastating - Egan scored a great point before Le Guen won back a ball she had no right to, starting off a move that ended with Michelle Heslin bursting through and blasting the ball to the net.

But as they had all game, Leitrim’s reply was deadly as they went straight back down the field and Vivienne Egan fired a rocket of a shot to the net with 13 minutes to go.

That was it really and although Wicklow outscored Leitrim 1-5 to 0-1 over the rest of the game, a tough tackling Leitrim defence blocked and harried and stopped any hope Wicklow had of mounting an unlikely comeback.

Wicklow did manage a goal through Jackie Kinch and Egan lofted over Leitrim’s last score but the green & gold never looked like surrendering their lead.

MAIN WOMAN - It almost feels wrong to pick just one name for every Leitrim player played their part. Karen Connolly was immense in the first half but had to come off. Edel Shanley was all grace and stealth while Aisling Quinn, Louise Maguire, Eimhin Quinn and Shannen O'Rourke had big moments. Edel Kelly and Carmel McGovern got huge scores, Vivienne Egan was a real handful at midfield and keeper Michelle Monahan was rock solid. But the driving force of the victory came down to five players - the O'Dowd sisters ran the show at midfield and their hard running led to goals while Aine & Michelle Heslin were immense on both sides of the ball. However, the outstanding player on the field was the tireless Carla Le Guen who delivered a tour de force, turning the ball over, tackling back, leading the attack at every opportunity and turning provider for her teammates. A truly exceptional individual performance.

TURNING POINT - Leitrim got off to a blistering start with two goals in the first two attacks but it was the goals of the O'Dowd sisters on 21 and 25 minutes that put Leitrim on the road to victory. Suddenly Wicklow were looking at a 13 point deficit rather than a six point gap to overcome and you could see it visibly affect their confidence.

TALKING POINT - Huge credit to the players who stood tall at Leitrim's hour of need. There were some who suggested that Leitrim might be better served being relegated but what good would that do when the county clearly has players of the standard to play and even win at this level? Fair play to those who remained, who stood by their county in its time of need - their reward was a very well deserved and enjoyable win last Sunday.

WHAT NOW? Whatever about confirming a management team for next year, which needs to be done now, Leitrim Ladies need to look at the root causes of why so many top players are not playing for Leitrim. With the talent in the county, this team should be playing for the trophy, not to avoid relegation.