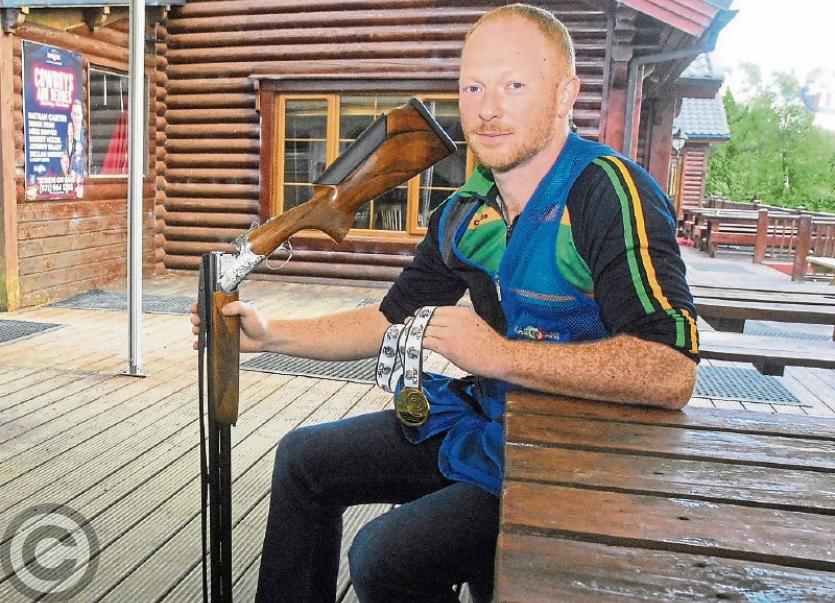 "A lot of it is in the mind, concentration. Definitely, it has to be somewhat natural but like everything, you have to practice"

It must be one of the great joys in life - to take aim and hit a flying target, the thrill of judging flight, speed, trajectory and it all coming together in the simple act of pulling a trigger. And it just so happens that Fenagh’s Enda McLoughlin is better at it than most!

But you’d be hard pressed to know that, for Enda isn’t one for publicising his own achievements and it took the persuasion of his fellow Leitrim teammates in the South Leitrim Regional Game Council to do this interview to mark his victory in the B category at the ICTSF World English Sporting Championships at Dowth Hall in Meath last July.

For those not in the know, English Sporting Clays sees clay targets presented to the shooter in ways that mirror the flight pattern of game birds and provides a shooting environment that offers different layouts and a constant challenge.

To win his title, Enda hit 170 targets or “birds” out of 200 possible targets to win the B category, one of only two Irish shooters to win a medal and just six shooters away from reaching the Super Final.

It is an achievement that Enda is taking in his stride as his only aim in agreeing to be interviewed by the Observer was to publicise the work of the South Leitrim Regional Game Council and to spread the gospel of Clay target shooting!

“I’m only really back shooting clay the last three years,” reveals Enda, “Back in July, the Leitrim team actually won a bronze in our category which is very good for Leitrim. You have a team of 12 shooters and we pick from 15 or 16 guys but we’re shooting at a very high level, you’d be surprised.

“Other counties have 150 to 200 guys to pick from so we’re doing very well. We practice in Drumshanbo, there is a shooting grounds there and Newtowngore have a grounds. Anybody can do clay target shooting, it is open for anyone and it would be nice to get a few more people into it.”

For Enda's World championship on the Devenish grounds across the Boyne Valley, the shooting course is laid out in stands or stations. On each stand, clays are thrown in pairs, either simultaneously, on report or following. A course consists of numerous stands, where 100 birds or more may be presented. The course setter can use any type of clay and with variation of speed, angle and distance can make a shoot as enjoyable and testing as possible.

So it really is a test of skill and nerve but for Enda, his enjoyment of the sport comes first as he regards it as a healthy pastime and a great way to spend time outdoors: “It is definitely only a hobby for me, a sport. I'd be shooting every weekend, maybe 100 cartridges. It wouldn’t be that crazy expense -a box of cartridges is €6-€7 and there is 25 in a box so two boxes. For €50, you’d shoot 100 targets which isn’t too bad.

“You need the gun, the pair of glasses and ear plugs, you don’t need that much to get going. In a lot of country houses, there is probably a gun there so lads could go grab the gun and go shooting. Once you have insurance, you can go to any of the grounds.”

The big attraction for Enda is the social side of the sport: “I enjoy it, there is a good social side to it, you get to meet a load of different people - you got to any shoot, there is always a lot of people around. I always would have done it, my dad would always have an interest in it and it was something I followed on with.”

Enda does appear to have a natural gift. Asked how accurate he was at the World Championships, Enda replied “Fairly accurate alright - on the green layout which was kind of the easier one, I had 87 out of 100. A couple of targets got away on me so I should have gotten a few more. On the other course, I shot an 83, I got roasted on one stand but still I ended up with 170 out of 200.

“I was only six players off making the Super Final. They would have been all professionals, full-time. I won Class B. The way the classes go there is Triple A, Double A, A, B, C & D. My grade is B because I’m only registered for shooting the last year for competition. I would have beaten nearly all the Irish Triple A, Double A shooters.”

Does it come naturally or is it all practice? For Enda, it is a bit of both: “A lot of it is in the mind, concentration. Definitely, it has to be somewhat natural but like everything, you have to practice. Some of it would come naturally, you put the gun up and you just seem to do it and other ones, you say I need to be six foot in front of the target or three feet under it, it could be 60 yards away and they are coming at different heights and angles.

“One target could be doing 100 mile an hour when it leaves the trap but then it will be slowing down and it just depends on where the ground is, you could be shooting through a gap in the trees. You have to try and judge that as well,” said Enda, revealing that his hand-eye coordination from days as a Connacht winning handballer come in handy for his sport.

Enda also had particular thanks for Simon Power of Cowboys & Heroes for his sponsorship of the Leitrim team and the great support he gives the sport in the county and the Fenagh man does have ambitions for the future: “Next year, I’d like to make an Irish team. Next year the CPSA Worlds are on in the UK and I intend to go, whether I’m on an Irish team or I go individually. An Irish team is possible for anyone who puts the commitment into it but you need to put the commitment into it. ”

“It is a hobby and while it is great to be able to go and compete at the worlds and win something, it is all about the balance of life and family, keeping everything right.”