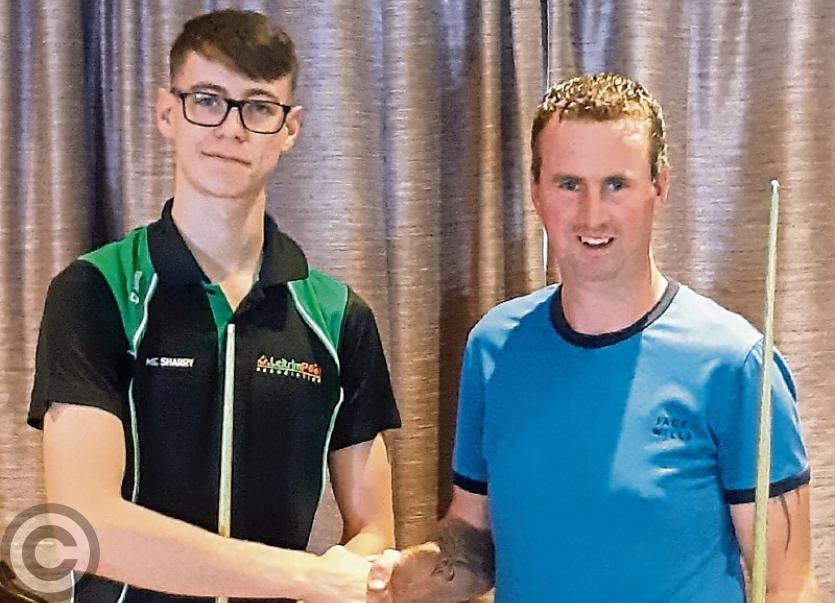 Drumkeerin’s rising pool star Lee McSharry moved a step closer to a €3,000 jackpot last Friday when he qualified for the quarter-finals of All-Ireland B and King of the Hill pool competition.

Lee beat Donegal’s David Moore in the last 16 of the All Ireland B and King of the Hill event in Carthy’s Bar Leitrim Village last Friday.

This is a new competition and it has received huge interest with the winner getting €3000 in prize money, each player is drawn against another with first out getting home advantage in a race to 21 frames.

David Moore made the journey to Carthy’s Bar Leitrim village, the match started nervy with both players trying to find themselves in the match. The beginning was very tight with no more than two frames separating the players. At the break it was 11-9 in Lee’s favour.

The Donegal man started the better of the two from the restart winning the next 5 frames to go from 2 frames behind to 3 frames in front at 14-11. McSharry needed to find something as the match was starting to get away from him and he did so by winning 10 out of the next 11 frames to win the match 21-15 from 14-11 down.

This win allowed Lee to progress to the quarter finals of the event where he will face Corey Sweeney, Lee has home advantage also. All other information regarding date, time, etc to be confirmed.

Also last Saturday, Jamie Gaffney made his way up to Coleraine in Derry to play Corey Sweeney in the last 16 of the same event. This took place in Potters Snooker Club in Coleraine. Again it was a race to 21 frames, black ball rules.

Jamie struggled at the off letting Sweeney go 3-0 up but Gaffney found his rhythm and reeled off the next 5 frames to go 5-3 up. Sweeney took the next 3 to level it at 8-8. The 2 players shared the next 4 frames to leave it all square 10-10 at the break.

Gaffney wasn’t out yet taking the next 18-17, but Sweeney got a step closer to the finish line 19-17. Sweeney and Gaffney shared the next 2, 20-19. But unfortunately it wasn’t to be for Gaffney as Sweeney finished it off 21-18.

Unlucky to Jamie who fought very hard and played some brilliant pool throughout the 6 hour battle.

Both matches were streamed live by Leitrim Pool, to see more matches like this in the coming weeks please like our Facebook page, Leitrim Pool Association to see links and live stream through out the following year.

The Annual LPA dinner Dance will take place on Saturday September 14, in the Lough Allen Hotel and Spa, Drumshanbo at 8pm.

On the night there will be several presentations from LPA Player of the year to Pub League to All Ireland and World Champions. Music by Alan Wrynne on the night followed by a DJ, it is set to be a great nights Craic. Tickets are now on sale through Dave on 0876490835 and are priced at a very reasonable €25.

The biggest pool event of the Leitrim pool calendar has to be the LPA Premier League, this years league has changed slightly, all matches are first to 8 frames, every one is given an appropriate handicap based on the ability ranging from -7 up to +4, you receive a bonus point for an 8-7 or 8-6 loss.

This is a very popular event and is suitable for everyone of all abilities. Each week there is one match allotted, time and date is decided by both players. To enter text Dave on 0876490835. The League commences early October, entry €40,for under 18's its €10

The Leitrim Pool Pub League will take place late October but entries are now open and can be made to Dave on 0876490835, this year the matches will consist of 3 sessions of 5 singles frames, with handicaps given to different teams depending on the number of county players each has either +1 or +2. Matches will take place on a Thursday or Friday night depending on the home teams preference, for more information please do not hesitate to contact Dave.