John Connolly chats with Tony Dolan about Honorary Doctorates from UCD, farming in Africa and football in Aughnasheelin 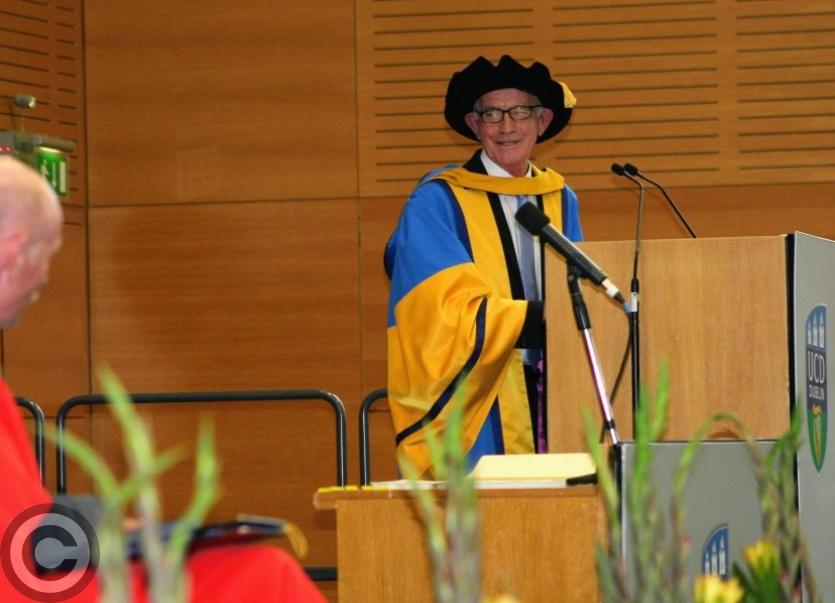 The Aughnasheelin grapevine was in fine fettle when the Observer got a call informing us of a rare honour for the parish and Leitrim - an honorary doctorate from University College Dublin for Tony Dolan.

Aughnasheelin's pride in the success of a native son was evident in Brendan Harvey contacting us with the news that Tony would be receiving his Honorary Doctorate in Agriculture from UCD last Monday evening and an interview quickly arranged as the Franciscan brother was only back in Leitrim for a short time during a holiday home from Africa.

A graduate of UCD and later Principal of Mountbellew Agriculture College, Tony Dolan is a Franciscan brother who played football for Leitrim with Pakie McGarty, trained under the late Eugene McGee and has spent the last 30 years in Kenya, Uganda and South Sudan helping local communities build self-sustaining and environmental friendly farming communities.

But when it comes to the matter of his Honorary Doctorate, Tony is honoured but somewhat bemused by it all: “Why I was selected by UCD, I don’t fully understand the process that was involved but obviously some of the people would have known what I was doing. It is a big honour, whether it is deserved or not is another thing!”

Living in Africa, Tony manages to get home once a year and was visiting relatives in Aughnasheelin: “Once you are past the 65 mark you get home every year. I don’t have any immediate family in Aughnasheelin but I have first cousins there but all my own family are in Dublin, Meath, Drogheda, Galway, North Carolina, I have a brother in Brazil.

“There were nine of us and unfortunately, we lost our first born, Fr Joe, on July 7, this year. Fr Joe was a Columban, he had been going down for a while but the Lord wanted him. It was hard enough because all of us are over 70 now. Our twin sisters are the youngest and they’ve gone past the 70 mark. Joe was 84, I’m 71 now.” 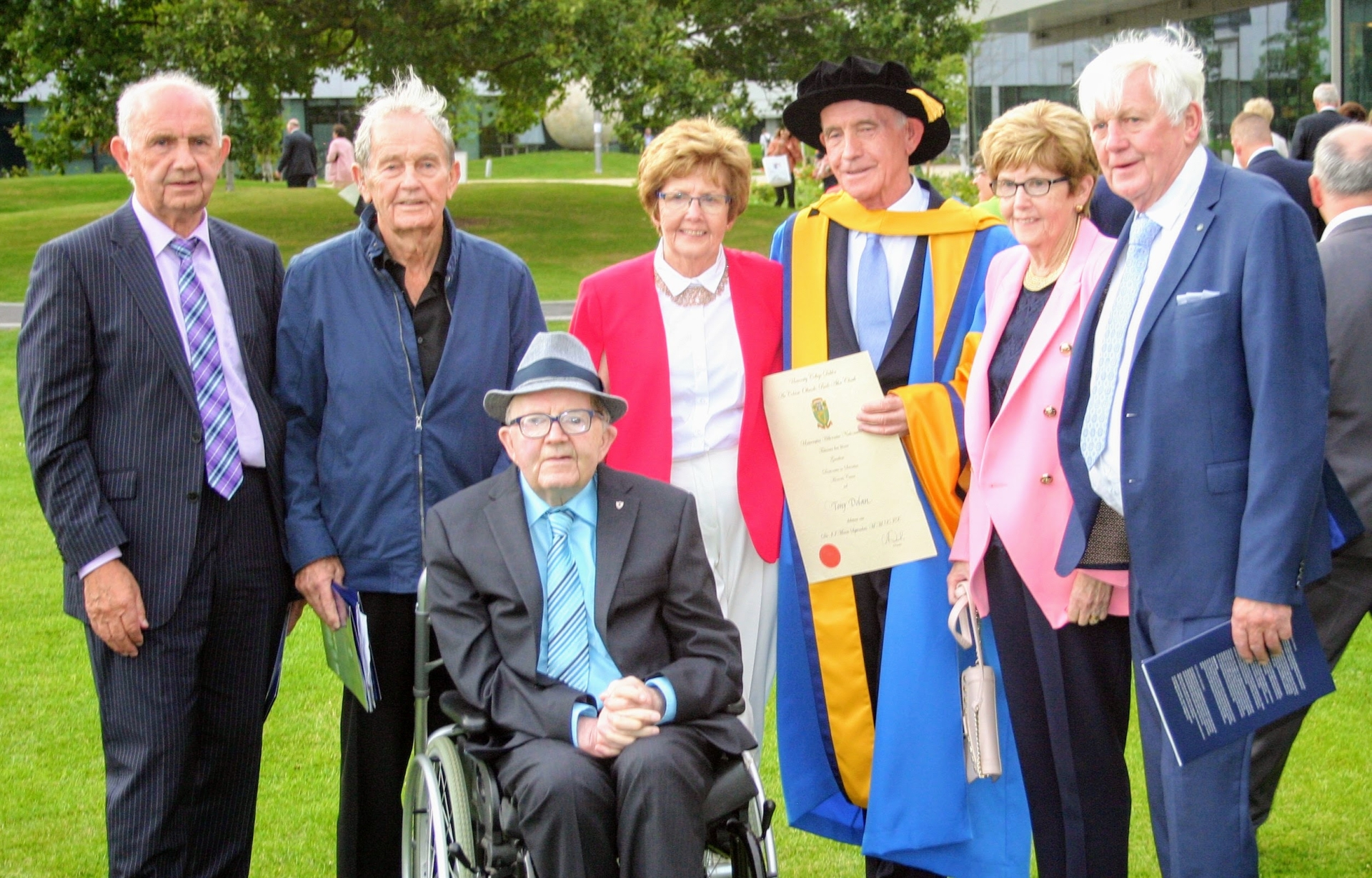 Br Tony Dolan pictured with, from left, his brothers Paddy, Fr. Leo,sisters Ann (O'Hora) Br. Tony, Kay (Flaherty) and brothers Jackie and, in front, Vincie after he received an honorary degree of Doctor of Science honoris causa from UCD

“I played for Leitrim from about 1968 to 1975/76. We beat Mayo in the first round of Connacht and then Galway beat us in the replay. We had quite a good team then.

“Joe, our older brother was part of that team in the 50s. I would have won a Dublin League with UCD but we lost the Sigerson the few years I played with them. Eugene McGee was our manager.

“I played in Mountbellew as well, we won a County title in 1974 and we beat Corofin,” recalls Tony, neglecting to mention that it was his last ditch point that won the title for Mountbellew.

Tony was a member of the famed Aughnasheelin team that won the 1968 Senior League unfortunately he missed out on the 50th anniversary celebrations of the historic success last year but his Leitrim career meant he got to play with Leitrim legends such as McGarty, Mickey Martin, Ben Wrynn, Mickey Colreavy, something he remembers with joy.

“I actually used to train with McGarty because I was in UCD with Ben Wrynne, Mickey Colreavy. Even at that stage, he’d out-jump you for a ball. He wasn’t a big man, he was a lovely guy. I think that was the last year he would have played.”

His heart might remain with Aughnasheelin but chatting to Tony, it is obvious that his work in Kenya and Uganda energises him still at 81 years of age! And Tony sees lessons for Ireland and all of Europe in the work the Franciscan brothers are doing in Africa.

“ We run an agricultural college, we have a secondary school in Kenya and an informal rural development unit in Kenya as well. Our focus is on the small scale farmers. It is basically looking as agricultural as multi-functional.

“The first function is to feed themselves, the second is to contribute to them making a decent living, the third is conservation and the environmental part of it, our focus is on sustainable agriculture which we should argue should also be the focus of European agriculture.

“The Common Agriculture Policy has led to great disparities, particularly in terms of the environment. Unless we look on agriculture as being multi-functional, rural communities are disappearing. Even in the west of Ireland and we know what has happened in Leitrim and in towns like Ballinamore, the smaller towns are disappearing. The likes of Aughnasheelin, when I was growing up, was a very vibrant community, not so much now.”

Africa’s challenges are the same that will face Europe in the coming years: “Kenya would have had a population of eight million at independence in 1963, now they have a population of over 45 million, a huge increase. Uganda was something similar.

“The very rapid growth of population and the issues of emigration here in Ireland but that is only the tip of the iceberg.

“Can you imagine a country, a labour force in Uganda of 17 million people, there is less than two million employed in the modern sector so there is 15 million trying to eek out a living in small scale farming from rural to the urban, informal sector like selling papers, polishing shoes. So it is a huge challenge facing Africa.

“Africa of all the continents is the one, in my opinion, with the greatest potential. It has a very young population, they are very entrepreneurial given the opportunity and they are very hard working. There are a lot of misconceptions about Africans on the Irish scene and a lot of racist attitudes.

“The reality is whether you are black or white or gray, human beings are the same all over the world. You take the small scale farmers of any part of Kenya, they are no different from our own fathers and mothers who strived to educate us back in Aughnasheelin.”

Tony also hopes that western countries actively engage with the issue of climate change: “The big challenge facing humanity is climate change, Brexit is only a temporary hiccup. Climate change is the major one and what are you going to do about that?

“What are we going to do as humanity about trying to create a decent livelihood for 2.5 billion people and why can we not have leadership, particularly the civil leadership who seem to be just interested in will they be elected in the next election.

“There is a lack of leadership to bring us past that and to say that human happiness is what we are about and we’re not going to achieve it with possessions and power but through relationships with each other and trying to ensure that community aspect of life is something that I would have a big concern about.”

But for all that, Tony is encouraged by the youth he meets in Ireland despite all the huge changes in society: “Huge changes when I come back here, many of them very positive. I know that the whole drug issue is a big concern but young people, looking at nieces and nephews, grandnieces and grandnephews, are much better than we were.

“Their values are very strong, they mightn’t be going to church or going to mass, the old criteria that we used to use but in the quality of their lives and their relationships, relationships with the environment and not just each other, they are so much better than we were.”