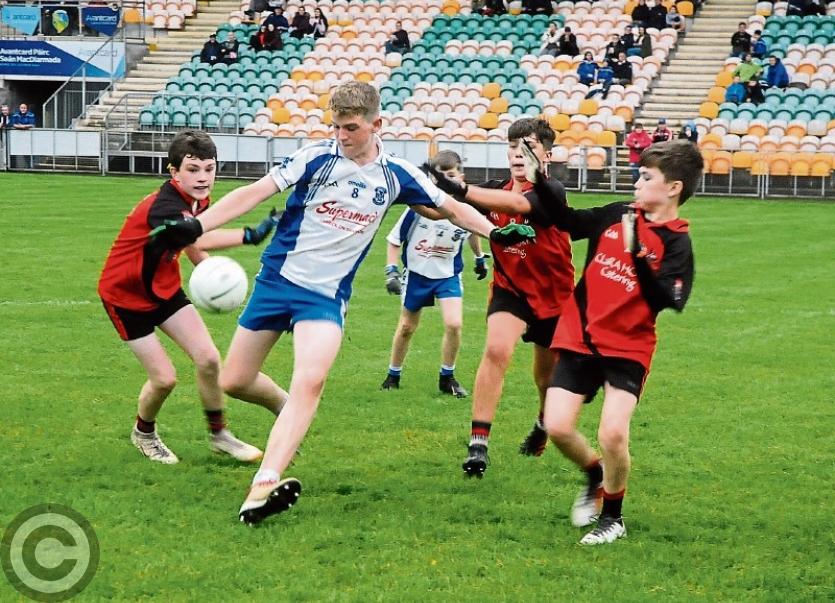 St Mary's Kiltoghert claimed a clean sweep of U13 titles for the second year in a row as they held off a determined Fenagh St Caillin's challenge last Friday in Avantcard Pairc Sean Mac Diarmada.

The Carrick youngsters' ability to find the net proved crucial as both teams scored 13 times but it was the four goals plundered by St Mary's that propelled them to this convincing eight point victory in desperately difficult conditions.

Fenagh will wonder what might have been as they mounted fierce second half opposition, matching their opponents score for score but crucially kicking some bad wides on the day.

However, St Mary's missed a succession of goals in the first half thanks to the last gasp intervention of keeper Shane Keegan and valiant his full-back line who blocked five shots, saved another and saw the crossbar hit before Carrick did get their first goal.

In the second half, the Mary's defence, led by the outstanding Alan Beirne, repelled everything that came their way with some great last gasp defending while keeper Daire Shannon also impressed, the latest in a line of strong custodians the Carrick men are producing.

Dara Holmes scored two long range goals while Josh Maye and Brian Keaney were always a handful for a Fenagh defence that fought tooth and nail for every ball. They gave up nothing easy but just couldn't hold the powerful Carrick attack at bay for the entire contest.

Josh Maye opened the scoring in the first minute from a huge “50” but despite tremendous St Mary’s pressure in the first ten minutes, they weren’t getting the scores their dominance deserved.

Not once but three times, the Carrick youngsters were denied as a goal as Maye and Aaron Gardiner had shots blocked and Niall Stenson hit the crossbar. It was an amazing assault on the Fenagh goal, made all the more amazing when James Gilheaney tapped over an 11th minute free to tie the scores.

Josh Maye was unlucky with another goal chance but St Mary’s started to pull clear with points from Brian Keaney (free) and Mayo (50) but the game changed utterly in the space of a minute when Dara Holmes long range shot slipped through keeper Shane Keegan’s hands, understandable in the driving rain.

From the kickout, Cian Reynolds long ball saw Maye get a vital touch to divert the ball past Keegan for a second goal. Keaney and Ruairi O’Rourke swapped scores with Gilheaney hitting another free on 20 minutes.

St Mary’s took control with a third goal, a break out of defence and when Holmes played a one-two with Maye, he took the return to fire a long range rocket to the net. Ruairi O’Rourke converted a free while James Gilheaney’s brilliant attempt at an answering goal was met by a great save from Daire Shannon.

Another O’Rourke free left St Mary’s lead 3-4 to 0-5 at the break but the first score of the second half was a killer for Fenagh, Cian Reynolds seeing his shot saved but Brian Keaney tapping home a rebound.

Strangely, it brought out the best in Fenagh as, despite a good Maye point, Fenagh reeled off four unanswered points from Adam Reynolds, Conor Fox, Dara Greenan and Gilheaney to cut the gap.

Cian Reynolds steadied St Mary’s with a point but the scores were coming less frequent as the conditions took their toll. Gilheaney and Keaney swapped points but Fenagh kept coming with sub Jamie Gallogly and Ruairi O’Rourke hitting scores.

However, St Mary’s weren’t going to be caught and despite Josh Maye having a goal bizarrely disallowed after he was clearly pushed in the back, they added points Brian Keaney and Diarmuid O’Connell point to seal the victory with a late Gilheaney point in response.

MAIN MAN - Hard to pick one as it really was a team effort from St Mary's - Alan Beirne, Ambrose Devine, the Gardiners, Diarmuid O'Connell, Josh Maye and Brian Keaney all stood out but Dara Holmes two vital goals give him the nod. For Fenagh St Caillin's, James Gilheaney, Ruairi O'Rourke, Dara Greenan and Colm McLoughlin did well.

TURNING POINT - Dara Holmes long range goal may have had a hint of good fortune about it as it slipped through the hands of the otherwise excellent Shane Keegan but it was the goal that finally got St Mary's moving and proved crucial.

TALKING POINT - Fenagh St Caillin's really proved their mettle this year - they don't have the huge numbers St Mary's do but each year, they are producing quality footballers from a relatively small area. Definitely a lot of good work going on in Fenagh too!

WHAT NOW - That's the double-double now for St Mary's with the League and Championship double won in successive years. And indications are the Carrick men have even more impressive teams on their way through so years of St Mary's dominance may only be beginning!