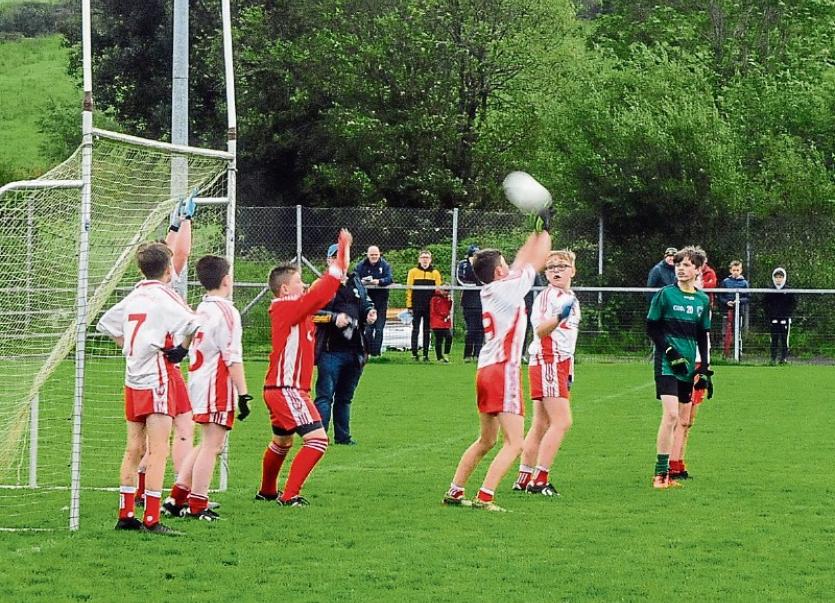 The ball skims off a Dromahair player's hands and goes over the bar Picture: Willie Donnellan

In testing conditions the U13 footballers from Gortletteragh and Bornacoola got the better of Dromahair on Friday evening last to claim the Barna Recycling B Championship title.

Having got off to a very slow start Dromahair responded well but ultimately Rinn Gaels had too much for their opponents and deservedly claimed victory after a keenly contested final.

The opening exchanges suggested Rinn Gaels would cruise to victory as they settled to the task at hand quickly while Dromahair struggled to get to the pace of the contest.

Noah McNulty opened the scoring for Rinn Gaels in the opening minute. McNulty would prove to be a thorn in the Dromahair side throughout the evening.

Two further points in the blink of an eye from Noah McNulty put Rinn Gaels four to the good with the game barely three minutes old and already it was beginning to look ominous from a Dromahair point of view.

Further points from Doyle and McNulty (free) put Rinn Gaels six clear before Dromahair had registered an attack of note.

The game was 10 minutes old before Dromahair registered their first score but it was worth the wait for their sizeable support as Domhnaill McHugh goaled from close range after he was found by Niall O'Donahue's dangerous delivery. With only goalkeeper Ultan McNulty to beat, McHugh blasted his shot to the goal to reignite his side's hopes.

Moments later Adam Gethins converted a free after he was fouled to reduce the deficit to just two points.

Having been outplayed for the majority of the opening exchanges Dromahair sensationally took the lead in the 12th minute when they struck for a second goal. Cian McMorrow's hopeful effort from distance evaded the attention of Ultan McNulty and found its way to the goal.

Noah McNulty and Adam Gethins (free) exchanged points before Rinn Gaels reasserted themselves on the contest with two pointed frees from McNulty to give his side a 0-9 to 2-2 advantage at the interval.

With the wind at their backs Dromahair started the second half well with Adam Gethins converting a free after the excellent Peter Coogan was fouled. Moments later it almost got better for Dromahair but Cian McMorrow's vicious volley came back off the angle of post and crossbar.

A quick counter-attack saw Jonathan Boyle point for Rinn Gaels which was soon cancelled out by Dromahair's Niall O'Donahue.

Noah McNulty (free) and Jonathan Boyle pointed to re-establish a two point lead for Rinn Gaels but Dromahair were in no mood for lying down and replied with two points from Gethins to level matters.

With 11 minutes remaining Rinn Gaels took a decisive step towards victory when two of their star performers Noah McNulty and David Liu Doyle combined with McNulty dispatching his shot to the Dromahair goal.

McNulty added to his side's lead with a converted free and with four minutes remaining victory was all but secured when David Liu Doyle scored Rinn Gaels' second goal after a pass from Jonathan Boyle.

Dromahair fought valiantly until the end but only scored two further points, both from Dylan McGoldrick as Rinn Gaels claimed a deserved victory.

MAIN MAN - Peter Coogan, Adam Gethins and William Hodson impressed for Dromahair while for Rinn Gaels Jonathan Boyle, Brian and David Liu Doyle shone.  Noah McNulty gets the nod for an excellent overall performance. He was a constant threat when in possession, showing good variety in his play. He was able to pick the ball up from deep on numerous occasions and caused plenty of problems with his incisive passing and accurate shooting.

TURNING POINT - Rinn Gaels could point to their impressive start that saw them race into a six point lead but equally as impressive was the manner in which they responded after Dromahair regained their composure and took the lead. Second half goals from Noah McNulty and David Liu Doyle ultimately proved decisive.

TALKING POINT - In very testing conditions both teams managed to produce an entertaining contest with the result in the balance until the closing stages. There were some great individual performances, from players on both sides with Rinn Gaels ultimately claiming a deserved victory after a keenly contested final.