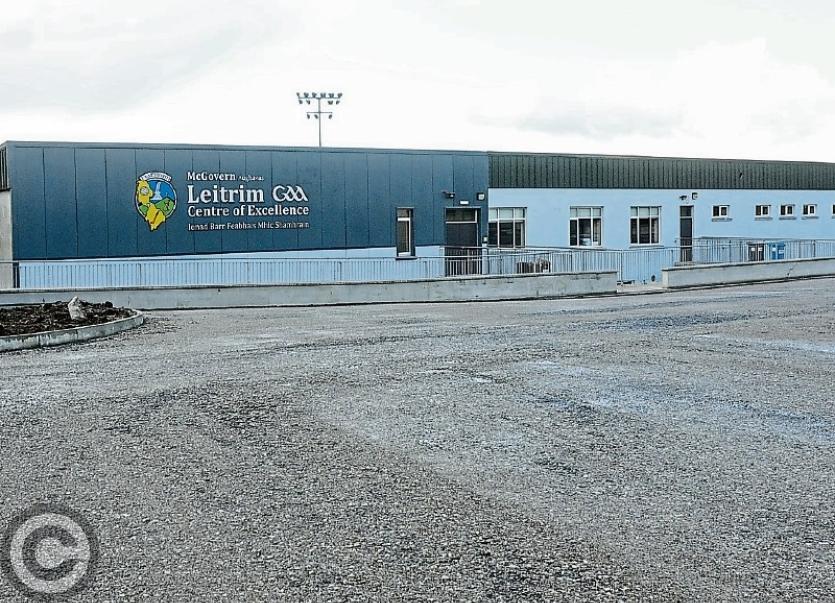 Terming it “a momentous day for Leitrim GAA, County Board Chairman Terence Boyle has thanked the thousands of Leitrim people who contributed to help make the McGovern Aughavas Leitrim GAA Centre of Excellence a reality.

Next Saturday, September 7, sees GAA President John Horan officially open the new state of the art facility in Annaduff at 1 pm with a programme of events designed to show off what will become the home of Leitrim GAA teams in the years to come.

Sponsored by Tony and Bernadette McGovern, the McGovern Aughavas Leitrim GAA Centre of Excellence features two fully floodlit all-weather pitches, four dressing rooms, a full indoor handball gym, a fully equipped gym along with meeting and analysis rooms for what will become the home of Leitrim GAA for years to come.

“This is a momentous day for Leitrim GAA,” Terence told the Observer this week as the County Board prepare for the official, “That we have our own training facilities and centre of excellence is a fantastic day for Leitrim.

“I know we have been using for the last couple of years but now that we have it finally completed, it is brilliant. There has been a long saga with it and the fact that we didn’t want to be going down the road of incurring a huge debt on the clubs of the county. Luckily, we have achieved that and we have a fantastic facility finally finished.”

First mooted in the mid 2000s when Leitrim GAA were also engaged in the development of the new Ardan Mac Samhrain in Avantcard Pairc Sean Mac Diarmada, then new Leitrim managers Mickey Moran and the late John Morrison visited the site on their first trip to the county on their appointment in August 2008.

The crash of the Celtic Tiger and the necessity to pay off the development of the new stand in Pairc Sean meant that the new Centre of Excellence fell by the wayside for some years but a drive over the last five years to get the centre completed has really paid dividends.

The “Help Build the Wall” campaign captured the imagination of Leitrim people all over the county and all over the world with over 450 people/families contributed to three different sizes of bricks on sale.

Terence agreed that Leitrim GAA are in debt to the Leitrim diaspora: “We were in a position where we had our Centre almost there but to finish the outside of the centre, to do the tarmacing and to finish it as a Centre of Excellence, to bring it up to standard.

So much so that the response almost overwhelmed the team behind the project revealed Terence: “The response was nearly too big in one sense that we didn’t have enough completed wall to facilitate the complete number of bricks we sold. We just had to put up a temporary wall for the opening and a permanent wall will be put up in the next few weeks.”

The Chairman also thanked the numerous people who worked on the project down through the years, commenting that he was a lucky man to hold the post when the McGovern Aughavas Leitrim GAA Centre of Excellence was finally completed!

“There are far too many people to mention who worked on this project and helped bring it about - I think I could be the fourth chairman to have an active role in developing the centre. I’m thrilled and honoured that it is being opened on my watch but it is not down to my doing.

“It is down to the amount of work that has been done over the long number of years previous to that. And the people who came up with the idea in the first place have to be commended for having the vision for this facility. I’m just glad that it came to fruition on my watch.”

Terence urged Leitrim GAA fans to come next Saturday to the official opening to get a good look at the Centre or to pop in at any time if they can’t make it at the weekend: “There has gone in a huge amount of works over the last few months to get the Centre of Excellence across the line.

“Once the funds started coming in, we got there. It is a fantastic facility and it is great that people will get to see that next Saturday. Brian Blake is based there full-time and people can call in when they want to have a look through the place.

“As you drive by on the N4, it doesn’t do it justice but when you go into the facility and see what is down the back with the two fantastic pitches, the lights and the building, it is a fantastic facility to have in the county for all our teams going forward.”

The new McGovern Aughavas Leitrim Centre of Excellence has been in use for a couple of years now with the venue hosting Leitrim underage and adult championship fixtures along with a FBD League clash with Roscommon in 2018. However, the venue is primarily a training base rather than a match venue with all Leitrim teams, hurling and football, as well as various Leitrim ladies teams using the facility.

One little known fact is that each of Leitrim's 23 clubs have the right to use the facility free of charge once a year. Clubs like Glencar/ Manorhamilton and Kiltubrid are currently using it for their championship preparations while even the Mayo senior team have used it on occasion.

The new McGovern Aughavas Leitrim GAA Centre of Excellence is something for all of Leitrim to be proud of and next Saturday's official opening will truly be a momentous day for Leitrim GAA!