A tale of two halves and missed chances 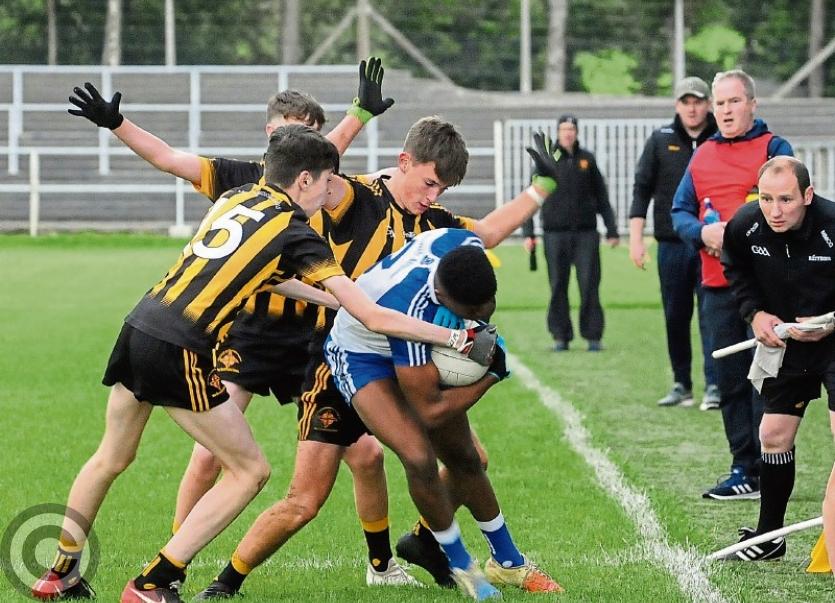 Who missed their chance and who will learn more for the replay? No, it is not Dublin and Kerry we're talking about but rather an intriguing U17 Division 1 Championship Final that ended all square last Friday.

The replay of the Newtowngore Engineering sponsored Final takes place this Friday September 13, after extra-time, due to be played in the event of a draw, was not played due to poor light last Friday.

St Mary's will point to a succession of misses in the first half and a missed goal chance in added time as reason to why they left this title behind them but Mac Diarmada Gaels, thrashed in the League final by the same opposition, will take a lot of heart and self-belief from this encounter.

St Mary’s opened the scoring with a Conor Hackett point after just 15 seconds but a Michael McKiernan free levelled the scores on four minutes. Conor Hackett robbed a defender and swept over a good point, a score followed by a good Cian Singleton score on six minutes.

Barry McWeeney pulled back a point from a free on eight minutes but both sides then missed a few chances, St Mary’s slightly more wasteful before Gavin Reynolds swept over a 15th minute free.

Niall Crowe powered over a good point from distance and Reynolds added a free before Barry McWeeney halted St Mary’s charge with a free. Crucially St Mary’s were completing dominating but hit five bad wides in a four minute spell as they failed to build on their supremacy.

Two Ethan Bohan points, one from a free, gave St Mary’s some reward for their dominance as they led 0-8 to 0-3 at the halftime interval but it should have been so much more.

The feeling that St Mary’s might pay for their wastefulness was reinforced early in the second half as Barry McWeeney scored two great points inside the first 90 seconds and Michael McKiernan added another from a 40 yard free.

St Mary’s were rocking but the introduction of sub Sam Barnes had an immediate effect as he swept over a point on seven minutes and it looked as if the Carrick side would ride out the storm.

But the next score changed the game completely as a ball to Danny McWeeney saw him pass to McKiernan who, despite an acute angle, managed to fire the ball past Killian Gaffey into the net.

With no score for the next five minutes, we then had two inside a minute as a poor Ashley Mayiza pass was intercepted and Barry McWeeney swept over an excellent point. St Mary’s hit back instantly with Sam Barnes scoring a lovely effort on the run.

But almost straight away, McWeeney added another monster as Mac Diarmada Gaels missed two chances to stretch their lead before sub Jack Casey fired over the leveller after a good move.

Halfback Emmet Regan showed his attackers how to do it as a Singleton intercept set him free and he fired over. Back came Mac Diarmada Gaels with Killian Gaffey making a wonder save to deny them a goal but they did pop over a free from Barry McWeeney.

St Mary’s hit back with a Singleton free as the Carrick men took over again, Niall Crowe forcing Kuba Kominsky into diverting a shot out for a fifty.

Barry McWeeney levelled again from a free but again St Mary’s went back in front with a Jack Casey point, although a goal looked on with a man over. Casey hit a wide but St Mary’s opportunity in injury time to kill off the game went abegging when they broke through two on one but Kominsky made a vital save from another Casey shot.

After that miss, Mac Diarmada Gaels broke and won a free in the middle of the field, the equaliser made much more manageable when the ball was moved forward for dissent by referee Ray McBrien and Barry McWeeney made no mistake with the equalising score.

MAIN MAN - St Mary's effort was a real team one with a lot of standout performers but there was no doubt the impact Sam Barnes had when he came on. Likewise for Mac Diarmada Gaels, some good performers but where would they have been without Barry McWeeney?

TURNING POINT - Michael McKiernan's goal early in the second half transformed this game, drawing the teams level and really putting St Mary's on the back foot.

TALKING POINT - This was the second County juvenile final this year that was supposed to go to extra-time and didn't. Hard to disagree with the decision not to play the extra-time as darkness closed in but what is the point of making these regulations unless time is allocated for it if it is needed? No point in making rules if they are ignored.

WHAT NOW? The sides meet again this Friday, September 13, at the early time of 6pm - extra-time included!