A year Leitrim will always remember 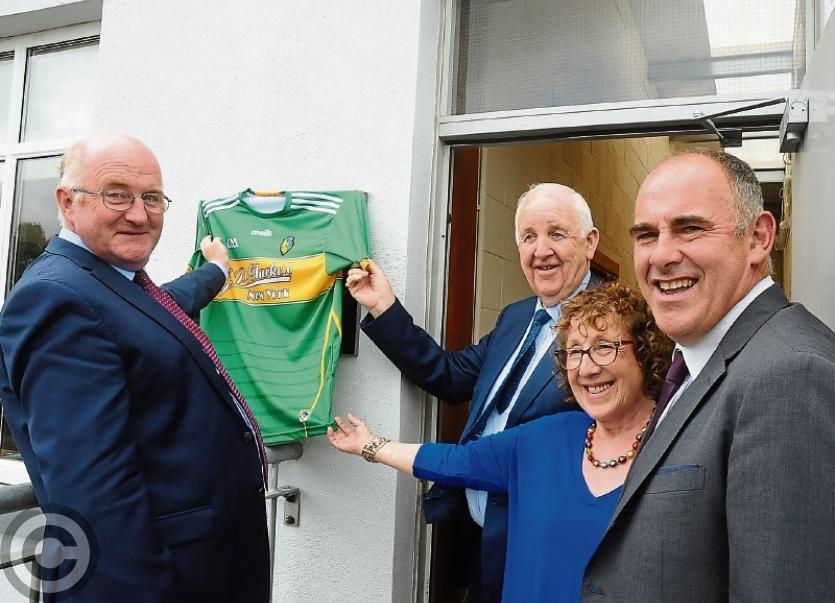 Some called it a momentous day and a day to remember but according to GAA President John Horan, the official opening of the McGovern Aughavas Leitrim GAA Centre of Excellence is a culmination of a great year for Leitrim GAA as a whole.

The GAA President officially opened the new Centre of Excellence along with Tony & Bernadette McLoughlin last Saturday before a packed crowd, the culmination of almost 15 years hard labour and thankless fundraising.

And it was that unwavering effort to provide the best possible facilities but always within the means of the County Board that impressed the GAA President as he spoke to the Observer before the official ceremony began.

“I think this is the culmination of a great year for Leitrim GAA in terms of the football and promotion in the national league and the success this year of the hurlers in the Lory Meagher,” said John.

“Now we are here for the culmination of this project and I think it is a year they will always remember. You can see the crowd here, you can see the buzz, the energy and excitement about the whole thing and I think that it will be very good for everybody.

“The Executive of the County Board have to be complimented because I remember coming down here three years ago and this venue, as it was then, was nowhere near what it is today. The work they have done in terms of finishing off the building, the car park, the entrance is top class.”

Given the heightened financial times we live in, Mr Horan was particularly pleased with the realistic attitude Leitrim took to the financing of the entire project: “The very good thing about this, and it really was very good leadership in all of this, they didn’t go off and spend a whole load of money and leave the county in debt and distracting everyone.

“They did it as the money became available and they raised it and I think that has to be complimented for the way the Executive of the County Board went about the job.”

Leitrim GAA County Board officials highlighted the enormous contribution Croke Park made towards the funding of the project down through the years, even insisting on crediting the Central Council for funding the project on the entrance signs to the Centre.

But according to John Horan, it was Leitrim’s own efforts that convinced him and Croke Park to back the facility to the tune of €2 million!

“We’re very conscious that each county is different, different counties have different potential and size is a key part of it,” said Mr Horan, “Leitrim wouldn’t have a big population so in terms of generating funding themselves, it was always going to be a challenge.

“We always felt that extra effort had to be made centrally to give consideration to that fact and to give that extra bit of support. But you will give support to people you know who are making the effort themselves, you won’t give it to people who you feel are going to sit back and have it all handed to them.

“Leitrim did put a huge effort into driving it on themselves. That was respected and that is why we felt it was right to come in and support Leitrim as we have.”

It was a theme the GAA President continued in his remarks to the audience during the official opening ceremony. Keeping the crowd no more than five minutes, the GAA President acknowledged the contribution the GAA makes to everyday life in Leitrim and all around the country.

“It is a great honour for me to be here today as President of the GAA for this special occasion within Leitrim GAA – the opening of their Centre of Excellence. A number of previous speakers have alluded to the fact that Leitrim is small but the GAA in Leitrim is huge, big is the word I’d use.

“The contribution of the GAA in Leitrim to the community in Leitrim is big and that is the part we should always remember. It may be coming from small numbers but it is equally and every bit as important as it is in every other county.

“I’m delighted to be here for this opening, I was here three years ago, I was brought on a tour of the facility, I won’t tell you why I was in Leitrim that particular day but it worked out fine afterwards.

“But anyway, a lot of work had to be done but the one thing that impressed me about meeting the officers of Leitrim County Board that day was they weren’t prepared to do the work unless they had the money.

“People have alluded to before about the support we gave from Croke Park to this development. This support came easily to the people of Leitrim and in particular to the officers of the County Board because we knew they were putting their hand in their pocket.

“They were putting their shoulder to the wheel and they were prepared to make the effort, to play their part in this development,” concluded Mr Horan.