Pride in delivering top class facility and thanks for public's generosity 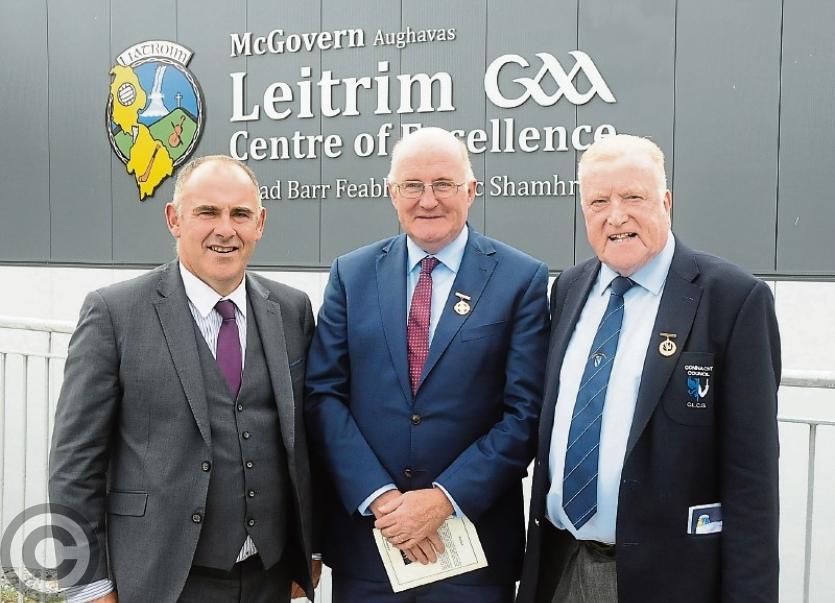 Pride and a sense of gratitude was the overwhelming emotion last Saturday as Leitrim GAA County Board finally got to show off what all the hard work was for at the newly opened McGovern Aughavas Leitrim GAA Centre of Excellence.

Leitrim County Board Chairman Terence Boyle termed it a “momentous day for Leitrim GAA, today marks the end of a long journey and today we open a facility we can all be proud of and most importantly without a massive debt hanging over us.

The Chairman also paid special thanks to Tony & Bernadette McGovern for their sponsorship of the new Centre of Excellence and the entire McGovern family for their support down through the years.

Terence went on to thank a number of people, including the late Joe Flynn and the late Jim Meehan who worked so hard on the project, Eamonn Duignan for his work with the ‘Help Build the Wall’ campaign, adding “Eamonn has never been found wanting when it comes to raising funds for Leitrim GAA.”

Senior team sponsors Seamus & Catriona Clarke were thanked for their support and Terence was delighted to announce that JP Clarke’s of New York had extended their sponsorship to a five year period.

Looking back over the year, Terence picked out some highlights of an incredible year for Leitrim GAA - “This year will live long in my memory. We reached two finals in Croke Park, we didn’t get over the line in the Division 4 Final but Terry Hyland achieved what we asked him to do and that was promotion from Division 4.

Terence also stressed the importance of the new facility for the future of Leitrim: “Our future is in our youth and it is great to see so many young people here and I want to compliment the Games Development Administrators for the huge amount of work they do.

“Finally, I want to wish all the players who use these fantastic facilities at the McGovern Aughavas Leitrim GAA Centre of Excellence the very best for the future.”

Eamonn Duignan told the gathering that the Leitrim Wall committee had set out with the target of raising €300,000 and as of the day of the opening, €320,000 had been contributed by Leitrim people all over the world.

“Once people understood the project, it became personal - people were declaring their loyalty to club and county and behind every message on this wall is a story,” said Eamonn who revealed that there were still a number of bricks available before the project will close for good.

Gerry McGovern has long been involved with the Centre of Excellence project as a County Board officer and Chairman but on Saturday, he was speaking in his role as President of the Connacht GAA Council.

Saturday was a special day for Connacht GAA and for the project to be completed debt free was a massive accomplishment, too often major projects led to a massive financial burdens on boards and clubs.

“Leitrim County Board are to be commended for providing top class facilities for its players and supporters but it couldn’t have been achieved without the support of Croke Park and the Leitrim supporters who have, time and time again, shown tremendous financial support for Leitrim GAA.”

Gerry also paid tribute to the McGovern family for their contributions to the GAA, noting that they must be the only sponsors to have the naming rights on two County grounds in Connacht.

“Leitrim have achieved a massive milestone and it can be argued that every county should have a facility like this. I think everybody in Leitrim can be justifiably proud of this facility here today.”

Leitrim Senior team sponsor Seamus Clarke said that JP Clarke’s has had an incredible year sponsoring Leitrim GAA and were so proud of their association with Leitrim GAA.

Urging everyone to support Leitrim GAA in any way they could, Seamus said “You don’t have to play football to make a contribution to your county.”

Leitrim County Council Cathaoirleach Cllr Enda McGloin also addressed the gathering, wishing Leitrim every success with the McGovern Aughavas Centre of Excellence into the future while the blessing of the facility was performed by local Annaduff priest Fr John Wall with John Lynch acting as MC for the day.