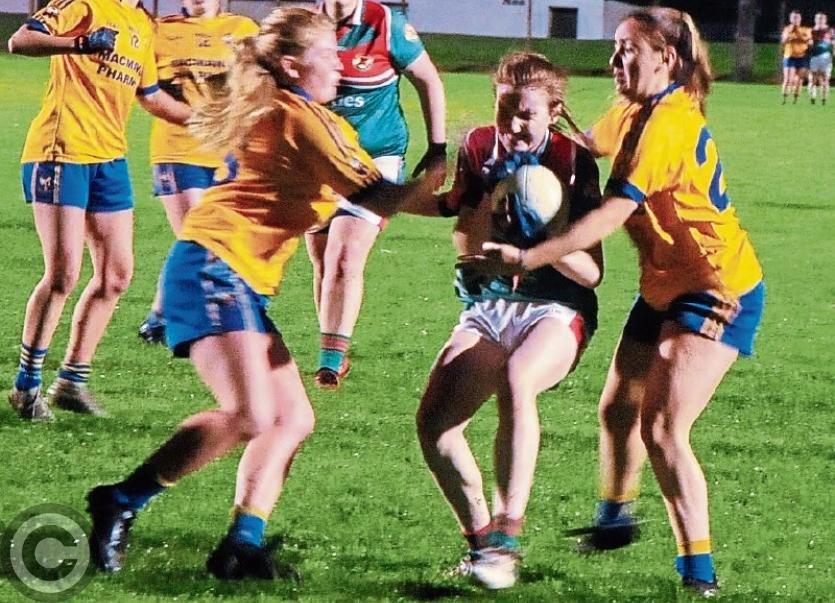 For a second year in a row, Glencar/Manorhamilton made it through to the Leitrim Ladies senior football final after they overcame a stiff Kiltubrid challenge by just a single point on Friday in Cloone at the end of what was a very entertaining and hard fought semi-final clash.

An Ailbhe Clancy 52nd minute point put her side three points in front with Kiltubrid whittling away Glencar Manor’s lead to the minimum. But that was as close as they got as Michelle Guckian missed a 20 metre free in injury time.

Glencar/Manor now face a repeat of last year's final where they lost to St Joseph's, the final provisionally scheduled for Sunday September 22, and an eagerly awaited rematch.

A 5th minute goal chance that fell to Muireann Devaney was denied at the expense of a ‘45’ after and excellent save by Miranda Foley. Cammie McPartland opened Manor’s account when she fired over from play two minutes later.

Ailbhe Clancy levelled the proceedings when she hit over a 9th minute point. Glencar/Manor took the lead for the first time in the game a minute later when Aoife Gilmartin shot her side’s third point in succession.

But the north Leitrim women got back on top after Ailbhe Clancy fired home the game’s first goal. Muireann Devaney shot a second Manor goal on the 15 minute mark to give her side a seven point advantage.

Over the next three minutes Kiltubrid responded decisively to again reduce the deficit to the minimum. A Michelle Guckian free dropped under the crossbar when it seemed destined to go over and Áine Tighe hammered another shot to the Glencar/Manor net.

In the space of a few more seconds Ailbhe Clancy fired over a point to register the north Leitrim side’s response. From then until the halftime whistle it became a tit for tat battle on the score board, as points were traded at opposite ends.

Michelle Guckian from a free and Ailbhe Clancy from play swapped points which left Glencar/Manor leading by 2-6 to 2-4.

Kiltubrid points from play by Áine Tighe and from a Michelle Guckian free, which was awarded for a foul on Tighe, then put the sides on level terms. A second Guckian free put Kiltubrid one point to the good.

But Ailbhe Clancy answered with a point from play on the stroke of halftime that sent the sides into the interval dressing rooms level on a 2 – 7 all score line.

In the opening four minutes after the resumption Glencar/Manor attacked relentlessly and edged into to a four point lead with Devaney firing over from play and then shooting to the Kiltubrid net, after receiving a final pass from Leah Fox.

Guckian replied with a 35th minute free to open Kiltubrid’s second half account. An Áine Tighe goal chance was denied in the following minute when keeper, Natasha McEnroy pulled off a good save.

Glencar/Manor was reduced to 15 players for ten minutes when Eimear Feely was yellow carded in the 37th minute and sent to the ‘sin bin.’ Michelle Guckian reduced the deficit to two when she put over a 39th minute free.

However Muireann Devaney hit back in the space of another minute with a Manor point from play. An exchange of points at opposite ends took place by the 43rd minute after Michelle Guckian tapped over a free and Manor sub Siobhan Feely fired over from play.

Glencar/Manor was again reduced to 14 players for a second time in the half when Cammie McPartland received a 39th minute yellow card and a ten minute suspension in the ‘sin bin.’

Shortly afterwards Michelle Guckian reduced Kiltubrid’s deficit with Glencar/Manor to two when she hit her ninth free of the game. But Clancy hit back with a 52nd minute point from play.

Some two minutes later Guckian again reduced Manor's lead from a free while Kiltubrid’s Sinead Tighe received a 56th minute yellow card and spent the rest of the semi-final in the ‘sin bin.’

Emma Guckian, who shot over from play for Kiltubrid, cut Glencar Manor’s lead to the minimum in the second minute of injury time. Two minutes later Kiltubrid won a free on the right wing around 20 metres out from the Glencar/Manor posts, which created the possibility for the south Leitrim women to get an equaliser.

But Michelle Guckian’s effort from the Kiltubrid placed ball tailed off wide and the north Leitrim side held out for a one point win after that.

MAIN WOMAN - Over the course of the 60 plus minutes there were two clear contenders for the accolade, namely Kiltubrid’s Áine Tighe and Glencar/Manor’s Muireann Devaney. At the end Devaney just edged out the Fremantle Australian Rules Football team bound Tighe to claim the accolade.

TALKING POINT - Kiltubrid probably deserved a share of the spoils. But Glencar/Manor just managed to outgun Kiltubrid when the chips were down.

WHAT NOW? Glencar/Manorhamilton meet three in a row chasing St Joseph's in the final on Sunday week.