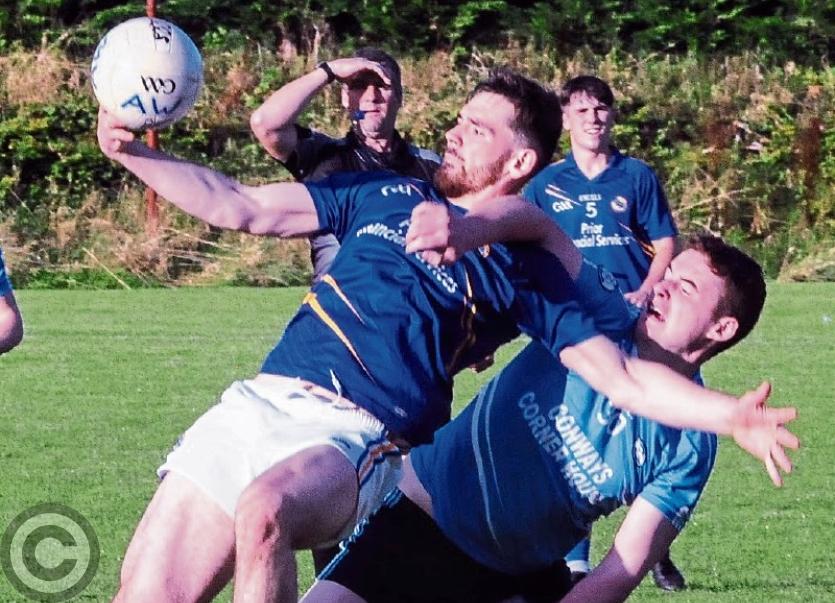 A phoney war it definitely was for a long, long time but Aughawillan's victory over a battling Allen Gaels in Pairc Sheain Ui Eslin may end up hurting the champions' chances of defending the Fenagh Cup.

With word coming through that St Mary's had won by ten points at a time when Aughawillan were leading by nine, the champions were being urged on by their mentors to grab the late point that would ensure they meet Melvin Gaels rather than Mohill in the quarter-finals.

That might seem like a dubious prize, facing Melvin Gaels, but taking on Mohill at a time when the champions are struggling with injuries to Noel Plunkett, Fergal McTague, Morgan Quinn and Ciaran Gilheany was a prize worth taking.

But in a real twist, Allen Gaels struck for a dramatic James Flynn in added time to end Aughawillan's hopes of bettering St Mary's result, a scoreline that will see one of the top three teams in the county exit the competition in the next round!

For much of the game, it seemed like business as usual. Aughawillan were a tad more open than normal in defence. Allen Gaels put in their best performance of the campaign, underlining the potential that is undoubtedly there but also highlighting their failure to deliver in other games!

Stephen Gilheany goaled after just 43 seconds but it seemed to inspire Allen Gaels as they reeled off four points from James Flynn (2), Ciaran Walsh and Martin Raftery to go in front by the seventh minute. Aughawillan hit back with two Gary Plunkett points and one from Pearce Dolan.

Back came Allen Gaels with two Flynn points while Barry Prior and Ciaran Walsh swapped points. It then looked as if Allen Gaels were taking control as halftime approached with Gilheany and Plunkett on target for the champions and Shane Walsh and the superb Flynn hitting the mark for the Gaels.

With the scores level and the final seconds of the first half almost up, disaster struck Allen Gaels with a kickout being intercepted and suddenly Sean Flanagan was blasting past his man to fire a rocket to the net.

Flanagan would added a quick point as Aughawillan led 2-7 to 0-9 at the break. Suddenly Aughawillan were now competing with St Mary's playing Dromahair in Carrick and not Allen Gaels and they reeled off three points in the first three minutes from Gary and Mark Plunkett and Rory McTague.

Caleb Duffy responded for Allen Gaels with a brilliant goal, finishing off a wonderful move on four minutes but Aughawillan's response was impressive with Gary (2) and Mark Plunkett restoring the lead, Barry Prior adding a point that was far too easy.

The goal Aughawillan needed came on 47 minutes, Sean Flanagan drilling low to the net but the full-forward, rusty after injury, missed a couple of gilt edged chances.

Goal chances were coming at both ends, Colin Maguire denying Cian Beirne and Duffy, Beirne adding a point. Flanagan and sub Michael Prior added points but the killer score came just in added time when a long ball was tipped on for James Flynn and he blasted to the net in a killer blow!