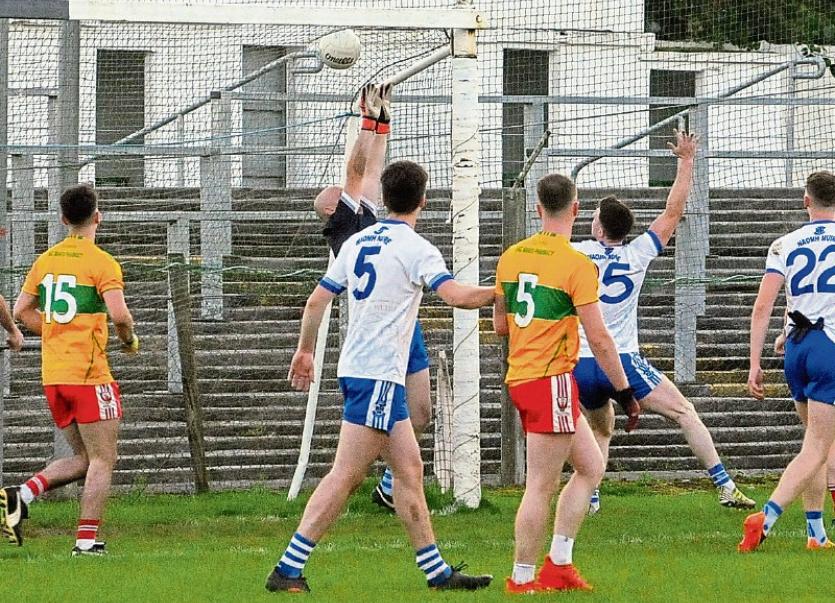 Late drama as Jamie Conlan's injury time free ends up in the back of the St Mary's net last Saturday Picture: Willie Donnellan

St. Mary’s had a facile win over a struggling but battling Dromahair side on Saturday evening in what was a low key Group 2 game in Avantcard Páirc Seán Mac Diarmada.

With this easy win the Carrick men grabbed the Group 2 runner-up spot to secure a quarter-final showdown with Melvin Gaels in Ballinamore at 12.30pm on Sunday afternoon.

In Saturday’s clash both teams were relatively closely matched for most of the first half even though the Carrick side enjoyed a much greater share of the possession.

St Mary’s really began to take command just prior to half time after Oisin Bohan netted the game’s first goal. It was very noticeable after the restart that Dromahair was slipping out of contention and St Mary’s was on the road to a runaway win.

However in the final minutes Dromahair scored 2-1 without reply, a lapse in concentration by the Carrick men should take into account by their mentors as they prepare for Sunday’s quarter-final.

After some early misses by both sides, Mark Diffley put over a 3rd minute free. It was another eight minutes before the game’s second score was registered and again it was Diffley who did it by tapping over another free.

Dromahair had to wait until the 16th minute mark to open their account when Jamie Conlan split the posts from a well executed ‘45, Diffley and Robbie Cunningham then swapped points

However St. Mary’s surged again, Diffley converting frees for fouls on Paul Keaney & Daire Farrell. But Jamie Conlon kept Dromahair in the hunt when he converted his second ‘45’ of the half on the 26 minute mark.

Diffley responded with a free and when St Mary’s won the next Dromahair kick-out, the ball was dispatched to Oisin Bohan who drove to the net from close range despite the close attention he received from some of North Leitrim side’s backs before he pulled the trigger.

Robbie Cunningham replied with a point before the break, which left St. Mary’s leading by 1-6 to 0-4 when the half-time whistle sounded.

The Carrick men pulled further ahead in the first three minutes of the second half with Daire Farrell hitting over a point and Mark Diffley firing to the Dromahair net.

Despite a Cunningham point, St Mary’s stretched their lead to 12 points as they mercilessly crushed the Dromahair challenge. Mark Diffley tapped over three frees and James Glancy shot over from play.

Dromahair, who hadn’t scored for 15 minutes, responded with a Robbie Cunningham free. but St. Mary’s stretched their lead after Bohan shot his second goal and added two points while Diffley converted his tenth free.

Dromahair staged a late rally that put some respectability on the scoreboard, Cunningham shot a goal and a free while Jamie Conlon, with the last kick of the game, saw his 45 metre free slip through the fingers of St Mary’s keeper, Conor Glancy on its way into the net.