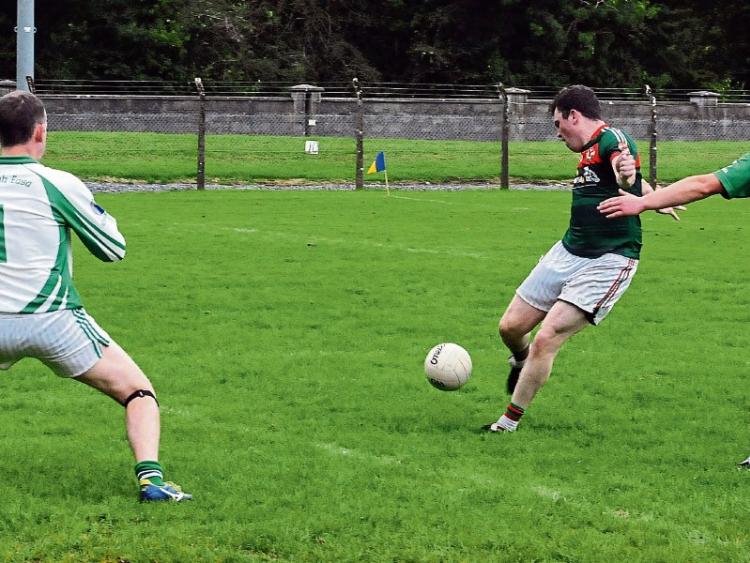 It was winner takes all and it showed on the field as the footballers of Kiltubrid and Aughavas left absolutely everything on the field last Sunday in Cloone with Kiltubrid’s intensive defence proving the match winner.

In an entertaining and fiercely contested Smith Monumentals Intermediate championship clash, Kiltubrid knew that a draw would see them safely into the quarter-finals while only a draw would suffice for Aughavas.

Early on, it looked as if Aughavas were going to run away with it but as the game wore on, the work-rate and intensity of the Kiltubrid defence stalled them in their tracks while Kiltubrid’s experienced troops created and took the chances that Aughavas were unable to.

There were errors, mistakes and bad play but the intensity of the contest, the whole hearted effort of both teams is what championship is all about and both teams deserve huge credit, Kiltubrid just that bit better able to deal with the pressure.

Early chances went abegging before Conor Prior opened the scoring for Kiltubrid on six minutes. Eoin Kenny, impressive for Aughavas, levelled after an intricate passing move and Gavin Farrelly edged his team in front only for Emmet Mahon to level.

That set the tone for the game with the team swapping scores - Seamus Sweeney and Eoin Kenny hit brilliant long range points for Aughavas before two Mahon frees levelled. David Charles Junior scored after a long break but Mahon responded with a free.

The crucial score came in added time - a high free in found Eoin Dolan, he broke the tackle and blasted the ball to the net to leave Kiltubrid 1-5 to 0-5 ahead at the break.

The tit for tat continued in the second half - Mahon and Sean McKiernan swapped frees before Aughavas made a big breakthrough, Keelan McKeon losing the ball to Seamus Sweeney who sprinted in and set up Gavin Farrelly for a great finish to the net.

It really was game on with neither side able to impose themselves on the game until Fionn O’Brien played a one-two with Keelan McKeon before scoring on 16 minutes. That came after Eoin Dolan had a goal disallowed for overcarrying, it was tough but I have to say I felt he was just over the limit.

Three minutes later, an off the ball foul on Mickey Earley allowed Mahon tap over but Aughavas came roaring back, two Sean McKiernan frees tying the scores with just over eight minutes to go.

Aughavas had a wide and Kiltubrid made them play, Mickey Earley scoring a well worked point and Eoin Dolan launching a missile high into the sky, the ball coming down just inside the posts with less than five minutes left.

A minute later, McKiernan walloped a 50 yard free over the bar to leave a point in it and Aughavas charged forward. Keelan McKeon received a black card for pulling down an Aughavas player as Kiltubrid did everything they could to stop Aughavas.

This included a yellow card for Mickey Earley, a second yellow for Aidan Bohan in added time and a black card for James Gill but it was worth it as Aughavas never got off a shot in the face of Kiltubrid’s hungry wolves scrapping for the ball.

That sort of indiscipline may come back to haunt them but their intensity meant there was no way for Aughavas to get the goal they needed to save their Intermediate status, dropping back to Junior for 2020.