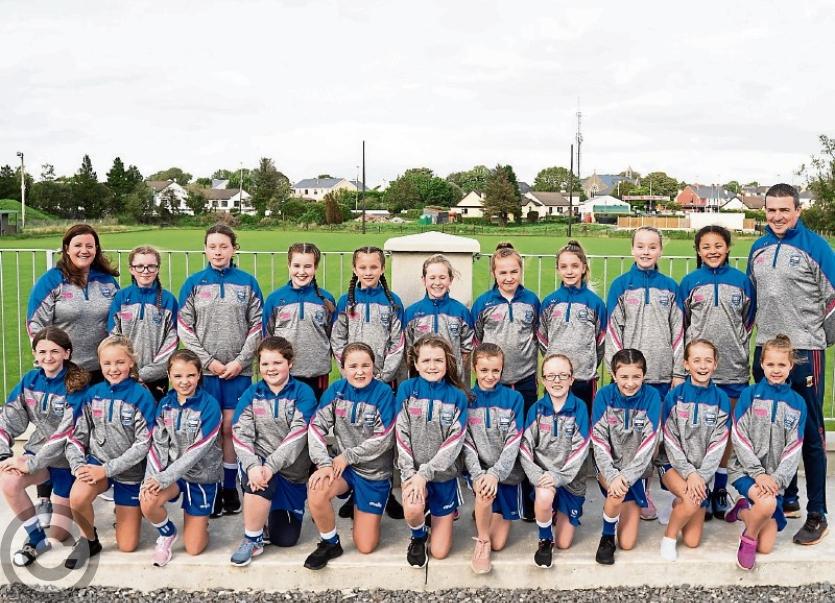 On last Thursday night Melvin Gaels U12 girls travelled to Leitrim Village to contest the 15 a side County Shield Final v Dromahair.

Melvin Gaels, in their first ever final as the new girls club, were determined to enjoy the occasion and were well drilled by Pat Gallagher, Katherine Williams, Dympna Keegan and Annette Lipsett.

Having played some fantastic high scoring football during the championship the final was a different matter. This match was a real arm wrestle. Dromahair, who were going for four in a row, were determined not to be dethroned.

The opening exchanges were frantic with neither side yielding an inch. It was clear that both teams realised what was on the line.

Melvin Gaels won the toss and played with a significant wind in the first half. Roared on by a great travelling crowd the Gaels were hoping to put up a good score in the first half. Sadie Connolly was on free taking duty and duly delivered with two lovely scores.

However that was the extent of the Gaels scoring. A combination of strong defending from Dromahair and some wayward shooting by the Gaels left the minimum between the teams at half time.

The large Melvin Gaels support cheered them off at half time. However it was clear to all that defending a one point lead against a strong wind in the second half was a big ask for such an inexperienced team.

The second half got underway to a great roar. In a game of such tight margins every ball mattered. Zakias presence further up the field began to make the ball stick and Meadhbh had some super catches in defence. Some great defending by Dromahair and a few strong saves by their goalkeeper kept the Gaels out. At the other end Dromahair laid siege to the Melvin Gaels goal.

Gaels goalkeeper Clara yet again kept a clean sheet in goals. The full back line of Aoife Zakia and Teagan continued their touch tight defence. On half back line were Clara, Annabelle and Emma who tackled hard, took some exceptional fielding and also plenty of bursting forward.

Every player put their body on the line none more so than the captain Grainne Whelan who covered every blade of grass. Her partner in midfield Cora also superb played end to end for the full 50 plus minutes.

Melvin Gaels were growing in confidence but wayward shooting was costing them badly needed scores. Eventually a slick move through the middle saw Sadie Connolly bearing down on goal. When she kicked a lovely point the roar that went up could surly be heard back home in Kinlough.

Sadie, Kaitlyn and Elaina were our excellent half forward line. Our full forward line of Aiblinn, Meadhbh and Katie with Alyssa coming in as a sub, were causing problems all day long for the Dromahair defence.

The final whistle sounded to great scenes of celebration. This was truly a team effort with 20 girls having been involved and playing throughout the championship. The subs on the day were Hannah, Molly, Michaela and Evie and they played a high part in the winning championship run.

The team returned to a wonderful homecoming in the Kinlough Community Centre which will live in their memories forever. They then all shared their joy the next day with classmates when the Shield visited each of their schools: Four Masters NS, St Macartins, NS, Castlegal NS and Maghe Ene. Its trip into the Sligo Grammar school is coming this week. Congratulations Melvin Gaels!