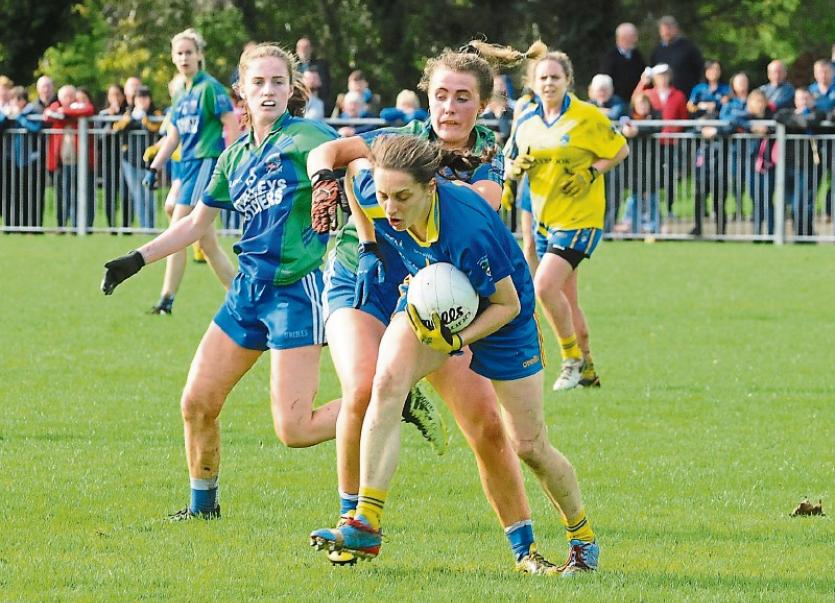 Having defeated everyone that stood in their way in Leitrim, St Joseph’s advanced to the Connacht Intermediate Championship final following a hard fought victory over Roscommon side Kilglass Gaels in Carrigallen last Sunday.

It would be hard to argue St Joseph’s were not worthy of their victory but the concession of goals at key times meant the result was still up in the air until the very late stages.

It proved to be an absorbing encounter with the game bursting into life straight from the opening throw-in.

St Joseph’s were rewarded for their positive start when Bronagh O’Rourke converted a third minute free but within a minute Kilglass had given their first glimpse of their attacking prowess as they carved the St Joseph’s defence open.

Mickaela McHugh, Siobhan Nugent and Nicola Tully were all heavily involved in a quick passing move before the ball was worked to Natalie McHugh. St Joseph’s goalkeeper Kiera Masterson rushed from her goal line and seemed to have made a fine save to deny McHugh but the shot was too powerful to keep out and the ball squirmed into the net.

The response from St Joseph’s was impressive with three points in as many minutes - two from Michelle Heslin and a Bronagh O’Rourke free edging them back in front.

Once more Kilglass hit back with Nicola Tully levelling matters with a converted free and moments later they struck for their second goal of the game when Aisling McGuire dispatched her shot beyond Masterson.

A Nicola Tully free put Kilglass four points clear but such was the manner in which the game was developing, it was clear St Joseph’s would come roaring back.

Although the game was still less that 10 minutes old, St Joseph’s looked like the better footballing team and gave a further glimpse of their attacking talent when Grainne O’Malley was released but her shot crashed off the upright. However, Bronagh O’Rourke was on hand to claim the rebound and slot the ball over the bar.

With 18 minutes on the clock, St Joseph’s scored the goal their attacking play merited when O’Malley was again played in behind the St Joseph’s defence but on this occasion she made no mistake with an emphatic finish.

St Joseph’s now led by three with seven minutes of the half remaining but there time for a twist as Kilglass finished the half strongly.

Within a minute of the restart, St Joseph’s were back in front courtesy of a Bronagh O’Rourke free that edged them into a 1-10 to 2-6 lead.

Moments later Kilglass were dealt a blow when Louise Tully was yellow carded and with a numerical advantage, St Joseph’s took control.

Bronagh O’Rourke converted the resulting free and that was followed by a Michelle Heslin point before St Joseph’s struck for their second goal of the afternoon.

Rachel McIntyre drove at the Kilglass defence before releasing Aine Heslin, who made a great supporting run, and Heslin buried her shot to the corner of the goal.

Further points followed from Michelle Heslin (two), Bronagh O’Rourke and Carmel McGovern to extend the St Joseph’s lead to 10 points with just a quarter of the game remaining.

However, there was to be another twist in the tale as St Joseph’s were reduced to 14 players when Grainne O’Malley was yellow carded with 11 minutes remaining.

The lead was extended 11 points when Bronagh O’Rourke converted another free but Kilglass were showing no signs of throwing in the towel and their hopes were reinvigorated when they scored a third goal when Natalie McHugh’s looping shot dipped under the St Joseph’s crossbar and into the goal.

A Nicola Tully free reduced the deficit further and with two minutes left on the clock the Roscommon side scored a fourth goal with Natalie McHugh scoring her third of the game.

With the game edging towards injury time Aine Heslin was shown a yellow card as Kilglass kept coming forward looking for a fifth goal that would bring them right back in contention.

However, the St Joseph’s defence stood strong, led brilliantly by Vanessa Gallogly and Shannon O’Rourke. Although Kilglass scored two late points with Louise Tully and Aisling McGuire on target, St Joseph’s had done enough to deservedly claim a two point victory and book their place in next Sunday’s Connacht final.