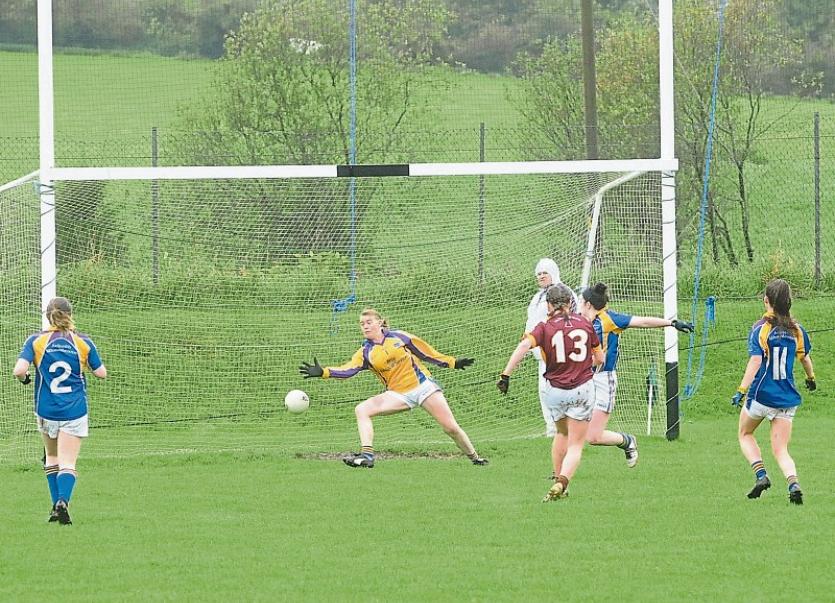 A strong second half showing from CL McHale Rovers saw them eke out a hard fought four point victory over a dogged Aughawillan in the Connacht Ladies Intermediate Club Championship Semi-Final in Pairc Sheain Ui Eslin, Ballinamore on Saturday.

In a game played in driving rain and slippery conditions, both teams served up a wonderful contest with Aughawillan setting the early pace thanks to a goal with the very first attack from Leitrim county star Carla Le Guen.

A Sinead Walsh goal just before halftime seemed to have swung the game in CL McHale Rovers’ favour but when Aileen Maguire struck for an Aughawillan goal just four minutes into the second half, the Leitrim champions really put it up to the Mayo standard bearers.

But CL McHale Rovers’ strength in depth and the brilliant Mayo Senior player Rachel Kearns dragged them back into the game, exploiting Aughawillan’s tendency to foul although the home side were unhappy with the interpretation of the rules by referee PJ Rabbitte.

In fairness to the official, he took a strict view of the no-contact rules of the Ladies game and it is a bone of contention when referees implement those rules, as opposed to when referees more used to the men's game adopt a more lenient line.

Aughawillan got off to a bright and perhaps lucky start when Carla Le Guen’s 35 yard shot evaded the hands of a jumping Niamh Larkin in the CL McHale Rovers goal and ended up in the net after less than 20 seconds.

CL McHale Rovers hit back with points from Rachel Kearns and Sinead Walsh, both of which could have been goals as they charged in behind the defence, Aileen Maguire responding with a wonder score from the wing.

Kearns drew the sides level on 10 minutes with a free after Aughawillan’s Caoimhe Gaffney saw yellow and ten minutes in the sin bin for a foul on the full-forward.

Aughawillan regained the lead with a Le Guen free on 11 minutes but a lovely point from Rebecca Maughan drew CL McHale Rovers level on 13 minutes.

CL McHale Rovers went in front for the first time when Maeve Quinn won the race to the ball but was penalised for a shoulder on Emily Murray with Kearns pointing the free. Aughawillan rallied with Le Guen getting on the end of a good move, the Mayo team’s defence snuffing out a goal chance while Aileen Maguire also saw a shot fall short.

But Maguire really hit top form, hitting two points in as many minutes, the first after good work from Le Guen and the second after a short free, to put Aughawillan two points clear.

CL McHale Rovers weren’t finished and a long ball found Sinead Walsh, she rounded the defence and drove a low shot to the Aughawillan net.

Aughawillan’s response was impressive as Maguire hit two points inside 60 seconds to edge her team back in front but CL McHale Rovers’ finished the half with points from Kearns & Walsh to leave them 1-8 to 1-7 ahead at the break.

It was the visitors who opened the scoring with a Kearns free after a foul on herself but Aughawillan went back in front as Aughawillan pounced on a poor kickout, Le Guen raced through before finding the unmarked Aileen Maguire who sidestepped the keeper before drilling the ball to the net from close range.

Kearns pointed from a 40 yard free off the ground to tie the scores on seven minutes, adding another from a long range free. CL McHale Rovers then found the net for a second time - there seemed to be a clear foul on Kearns as she shot but play went on, Emily Murray keeping the ball in play.

It looked as if the Aughawillan defence was expecting a free as they stopped running and it gave Sinead Walsh the room to gather the pass and drive the ball to the net on 41 minutes.

Le Guen missed the chance to cut the gap from a free midway through the half and Kearns stretched the lead to five on 49 minutes from a free. The rest of the game got very scrappy with conditions deteriorating rapidly but Aughawillan gave themselves some hope when Aileen Maguire got a good point on the break.

But Aughawillan’s hopes suffered a major blow when Catherine Holohan was sin binned for a foul on Rachel Kearns. Aughawillan never stopped battling and as the game went into injury time, the Leitrim champs got a soft enough free and Maguire put it over to leave just three points between the teams.

But CL McHale Rovers ensured there would be no fairytale ending as Kearns converted an injury time free to seal the victory despite a heroic battle from the Leitrim champions, an effort they should be proud of.