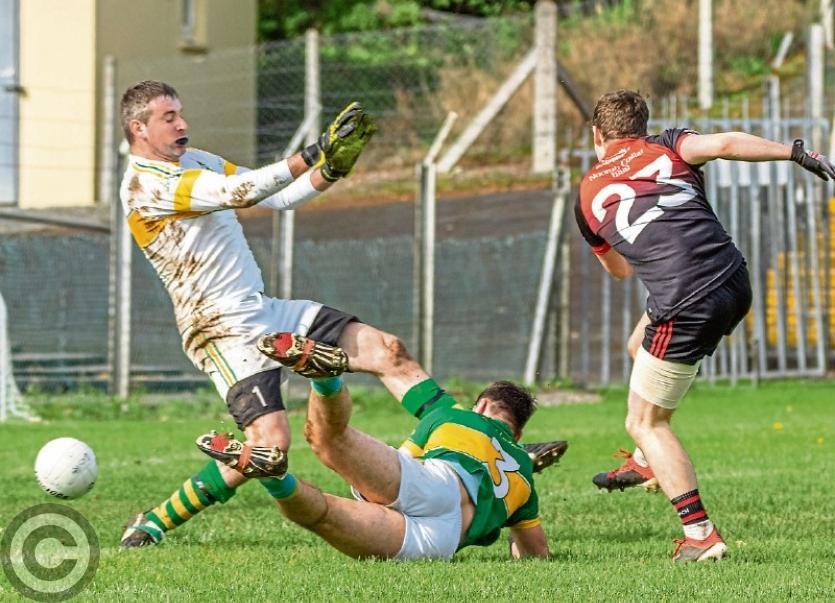 A fully committed and well organised Fenagh side emerged as clear cut winners of Sunday’s Senior Championship relegation final over a Gortletteragh outfit that was never really at the races in Avantcard Páirc Seán Mac Diarmada.

The determined Fenagh men came out very much on top over a somewhat lacklustre Gortletteragh side as they well and truly avenged their group stages one point defeat by Gortletteragh, a loss that denied St Caillin’s a place in the quarter-finals..

On Sunday, the sharper Fenagh side set the agenda from early on and they never deviated from that plan at any stage. A struggling Gortletteragh were forced to play second fiddle and there appeared to be little they could do about it at any stage.

The introduction of Cathal McCrann and Conor Reynolds prior to halftime, when they had gone nine points behind, seemed to give them a slight boost. But while both players made an impact, Fenagh were still well capable of dealing with whatever threats they posed.

Gortletteragh didn’t help their cause in the game with some very wayward shooting, shooting 14 wides (10 in the first half and four in the second) over the hour as compared with Fenagh’s six (four in the second half).

Both sides found it quite difficult to settle down in the opening exchanges with the game’s first scores coming in the fifth minute when Riordan O’Rourke opened Fenagh’s account with a point from play while Evan Ward did likewise almost immediately for Gortletteragh.

Shane Doonan put the Fenagh men back in front in the following minute when he shot over to put his side into a lead they never relinquished.

Donal Wrynn edged Fenagh further ahead when he flicked home an eighth minute goal from the 13 metre line after being put through by Oisin McLoughlin. Riordan O’Rourke increased the advantage to six by the 13th minute after he fired over two points in turn.

Gortletteragh’s Padraig Gallagher finished a 16th minute effort to the Fenagh but the goal was disallowed for an apparent over carrying infringement. Fenagh continued to dominate the exchanges and went further ahead over the next twelve minutes with Riordan O’Rourke and Donal Wrynn pointing frees, while Riordan O’Rourke also added a point from play.

The introduction of Cathal McCrann & Conor Reynolds some minutes prior to half time gave their side a much needed mini boost. Colm Duffy shot Gortletteragh’s first score in 24 minutes when he split the posts with a 29th minute effort. Cathal McCrann tapped over a free before the break as Fenagh enjoyed a 1-7 to 0-3 lead at halftime.

The Fenagh men increased their advantage after the restart when Oisin McLoughlin fired over in the first minute of the second half. Cathal McCrann answered with a free two minutes later.

Gortletteragh had a let off when goalkeeper, Conal Clarke tipped a goal bound Aaron Smith 34th minute shot over his crossbar but Conor Reynolds replied a minute later with a point at the other end.

Riordan O’Rourke stretched Fenagh’s lead to 0 – 8 when he whipped over a 36th minute point. Meantime the Fenagh men had a let off three minutes later when Conor Reynolds blazed a Gortletteragh goal chance across the goalmouth and inches wide from close range.

Oisin McLoughlin and Niall Woods traded points but Fenagh made victory absolutely secure when they held Gortletteragh scoreless for 12 minutes and while Ryan O’Rourke shot Fenagh’s second goal while Riordan O’Rourke pointed from play twice, one of which was from a goal chance, while he also converted a free with Oisin McLoughlin chipping in as well with a point from play.

Cathal McCrann won a penalty, which he clinically slotted past Fenagh keeper, Paul Gill. Keoghan McGovern added a Gortletteragh point from play five minutes later. A minute later Riordan O’Rourke completed the scoring when he fisted over a Fenagh point to give his side a fully deserved 12 point winning margin.