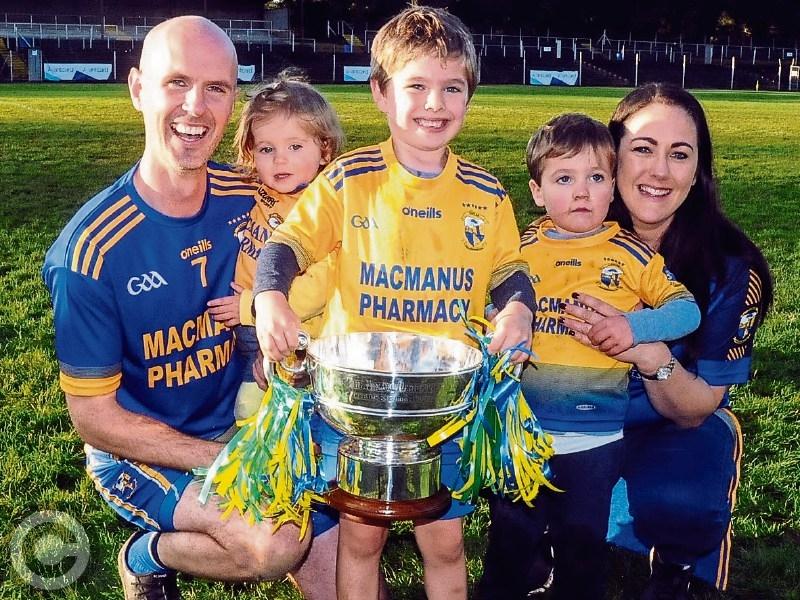 Is there any better way to go out than after winning a Senior Championship title against the odds? Hard to beat it as Glencar/Manorhamilton’s Pat Gilmartin revealed after playing a key role in a fifth Fenagh Cup victory for the north Leitrim kingpins.

Twenty-years after he was a member of the Glencar/ Manor squad who won the title in 1999, Pat was still on the field last Sunday against Ballinamore Sean O’Heslin’s and sees it as the end of his time playing Senior Championship football.

“No, no, it is time I let the young lads at it,” laughed a clearly delighted Pat, “I came back this year and said I’ll do whatever, I’ll be a sub if they want me. I didn’t play the first few league games, I got a few injuries but I just ended coming in and held onto my place. Glad I did but that is football and sport.”

The passage of time hasn’t dimmed his enjoyment of the game nor his desire to see Glencar/Manor succeed: “It doesn’t feel like 20 years but that is football in Leitrim, it is lifeblood for an awful lot of people.

Sunday definitely wasn’t his first time in the winner’s enclosure but you could sense just what it meant to him, so much so that he nearly lost the ability to put it into words!

“We’re just over the moon, we’re elated, I’m just so happy I’m nearly not able to speak. It has been a long time coming. We’ve worked no less hard this year than we did the other years but this year we just felt there was a huge resolve about us. No-one was really talking us up, in Manor, there was no hype, absolutely no hype.

“It was the most relaxed final I ever went into and we just felt good going in. In the end we might have made hard work of it but we did it when it mattered.”

It might have been the most relaxed he ever went into a final but it was far from relaxed on the field and even the benefit of the extra-man seemed to hamper the new champions: “The same thing happened us in the semi-final against Melvin Gaels. We had a super ten minutes after halftime and then the same kind of thing, Melvin Gaels went down to 14 and you know, you often see that the team with 14 often ends up playing better.

“We had a plan in place if the situation arose that the other team went to 14 but it just seemed that we made hard work of it. We just stopped working through the lines and attacking at pace and maybe sat back a bit more. Thank God we got through in the end.”

Pat’s confidence in his own team-mates was so rock solid that he never contemplated losing: “No, it was all about going forward at that stage. It was there, you just had to go for it and we weren’t going to sit back because sometimes it is when you don’t go for it, these things happen so at that stage we said we were going for it.

“We forced a free, I think it was James Glancy, the bit of experience, forced a free and no better man than Conor Dolan to take it.”

The former Leitrim star also had words of consolation for Ballinamore, predicting their day will come soon: “We won in 08, we got a bit of luck against St Mary’s, who were a super side, in the semi-final and that’s the way it works.

“We shouldn’t have won it but we did and it gave us that bit of belief and sometimes when you get that bit of belief, momentum can happen. Then we lost a few - won four lost four but you just have to keep at it.

“Ballinamore, as I said to a few of the lads after the game, their day will come but they will have to learn from today as we learned and go back at it harder and stronger and your day will come. That was the same for us today, we were facing down the barrel of losing maybe five finals in a row but we got there and we’re just delighted.”