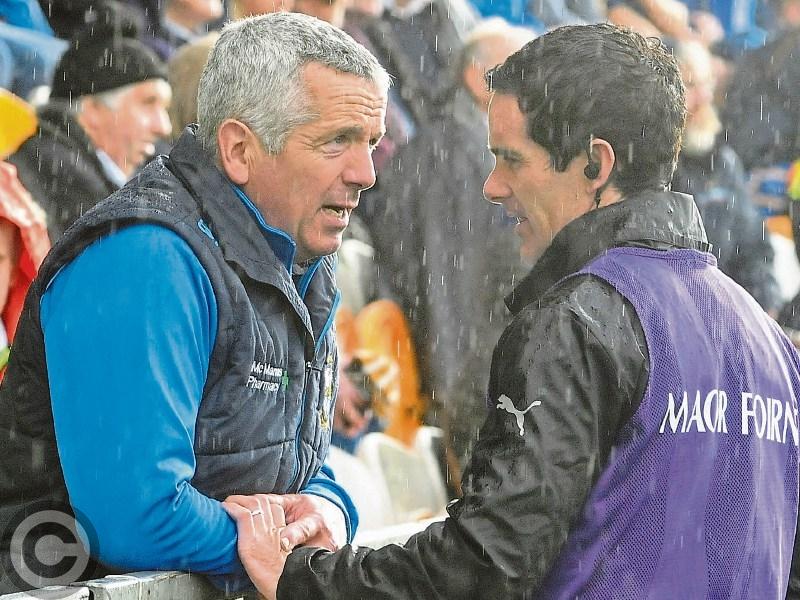 An injury time winner to seal a senior county championship title is as dramatic as it gets but for Glencar/Manorhamilton manager Shane Ward his joy was still being restrained by the frustration of his side’s final 15 minutes that almost saw the game slip from their grasp.

“Dramatic is the way to do it if you are on the right side of it,” was Shane’s initial reaction when reflecting on the game shortly after the full-time whistle.

Ever the perfectionist, the former Leitrim manager explained why he was so animated during the closing stages: “ I wouldn’t have been pleased with the last 15 minutes, you might have seen me or heard me roaring out at the boys on the field.

“We have prepared for those 15 minutes a lot of times in training. We spotted that is a time that they need to capitalise on and I was just praying that they would come up with a solution and they did.

“Evan Sweeney struck a huge ball from the 45 across towards James Glancy who drew the free which was brilliant. I was pleased with their effort but we could have made it easier for ourselves but nonetheless we still got the win.”

The game’s main talking point has and will continue to be for some time, the red card for Ballinamore’s Donal Feel. When asked for his take on events, Shane said he was in the dark.

“I didn’t actually see it. I just saw a kerfuffle on the sideline, I don’t know what happened, I still don’t know what happened. The boys on the radio mentioned somebody may have struck out but it was a big call and it had a big effect on the game. It broke the momentum coming up to half-time. As long as we are not on the receiving end of it; we worked hard on our discipline and always try to keep it when we can.”

With Glencar/Manor in the ascendancy at the time the red card was shown, the easy presumption to make was that Shane’s team would push on to victory. Of course that is not how it transpired with Shane reflecting: “It’s a different game completely and I don’t know does anybody have the answer to that question - why the 14 always push the 15. We had a clear plan and I thought it worked well at times but the nature of the beast, when it comes to the last 10 minutes and it is all to play for very few teams push on and stride out in county finals.”

While it was one of young guns, Conor Dolan, who was the hero of the day, Shane had a special word of praise for the stalwarts of the team such as Anthony, Thomas and Brian McDonald, Darren Sweeney, Pat Gilmartin, Gerry Hickey and James Glancy.

“I have big respect for those guys and I hope we would have a mutual respect. We handled those guys very carefully this year and had a plan in place for those guys so that they could give their best at this time of year.

“They have been there done that and literally bought the t-shirt. For some of them it is their ninth county final. They have lost four and that is not easy to take and losing two in a row, that is very hard to take as players; for players who are so diligent and people who have experienced so much success that know the difference between winning and losing.”

Next on the agenda for Shane and Glencar/Manorhamilton is the Connacht championship and Shane insisted it is a competition in which he wants his player to show just how good they are.

“That is our focus now and it’s funny because I said that the first time I met those boys two years ago it was a pity they didn’t make an impact in Connacht because I don’t think they do believe they are actually as good as they are.

“We have really, really good forwards; they can play ball. We have defenders who can defend properly and two or three midfielders we can bring in at any time. They have the natural ingredients to play, it’s just about getting on the front foot. We'll celebrate for a day or two but then back on the training field with a full focus to try to push ourselves a little bit more.”