Conor Dolan was Glencar/Manorhamilton's man with the ice in his veins! 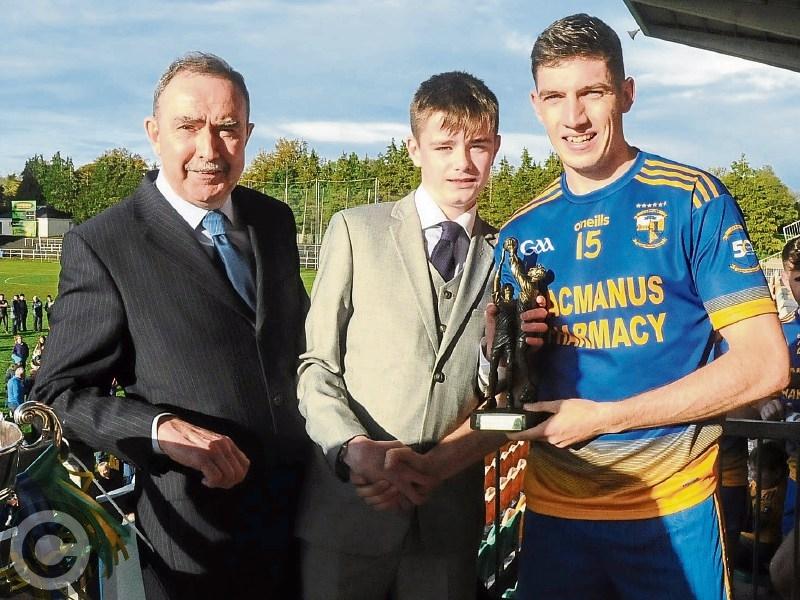 Cometh the hour, cometh the man with ice pouring through his veins. With a senior championship on the line Glencar/Manorhamilton captain Conor Dolan looked the calmest man in Pairc Sean Mac Diarmada as he slotted an injury time free over the bar to secure victory, but he did admit that even he felt the nerves.

“In games like this you try to block out the crowd and just get on with your own game but I’m not going to lie, it was tough,” was his immediate response as he reflected on his injury time heroics.

Elaborating further he added: “The pressure was on and there was a lot of jeering coming from behind the goals and behind me but my job is to be the freetaker and put the ball over the bar. If I put the ball wide I wouldn’t have done my job and thankfully the ball went over the bar.”

“You do feel the pressure but in the heat of the moment you just get on with it. Another day the ball could have gone wide but thank god it went over the bar.”

That late free saw one of the elder statesmen of the team, James Glancy fouled to win a free for the 23 year old captain and Conor was quick to pay tribute to Glancy.

“James is a great man to win a free. You hit a high ball into him at 60/40 with the odds against him, most of the time he will win it and he did super. He took a nice wee knock for it but he did very well.”

As one of the new generation of Manor players who had yet to get his hands on the Fenagh Cup, Conor acknowledged it was “a special feeling,” adding it was a coming of age from some of the younger players that proved pivotal.

“There are some boys there with four senior medals and others with none. In the last few years maybe we were looking at the older lads and waiting for them to do it when the pressure came on but this year there has been a real maturity from the middle group.

“We pushed on really well, we have huge belief in ourselves since we went back training at the end of January and we knew there was a championship in this team and thankfully we showed that today.

Conor was also quick to pay tribute to Ballinamore saying: “They came out flying, I think they were 0-5 to 0-1 up at one stage. Ballinamore are a great team and they are going to have a lot of success in the future but that was one thing about this team this year: whether you go five up or five down there is no panic and you always go to the final whistle and that all came into play today.

“We didn’t panic when we went 0-5 to 0-1 down, we kept at it, we went in two up at half-time. We kept going and they came back at us in fairness in the second half but we finished out the game well.”

The first half dismissal of Ballinamore’s Donal Feely was arguably the day’s main talking point but Conor was not overly surprised that Ballinamore continued to be ultra-competitive even when a man down.

“You see games on television and often the team that go down they are more motivated and to be honest we knew that was coming. At halftime we knew they were going to come out all guns blazing in the second half and they did all that. We weren’t thinking about the 14 for them, we were thinking about our own 15 players and the subs that came on.

“Everyone, and not just today, the impact that our subs have made has been a joy to watch. I’m extremely proud of the bunch of players that we have.”

Attention turns to the Connacht Championship and while Conor admitted he was in the dark as to potential opponents, now that they are in it, it is a competition they will be taking very seriously.

“I don’t even know what the story is with Connacht, we were just focusing on today but now that we have won today we are representing Leitrim and we don’t want to let Leitrim down. We’ll enjoy tonight and tomorrow but we’ll get back to the drawing board and we’ll knuckle down and we will try to represent Leitrim in the best possible way that we can whoever we come up against.”