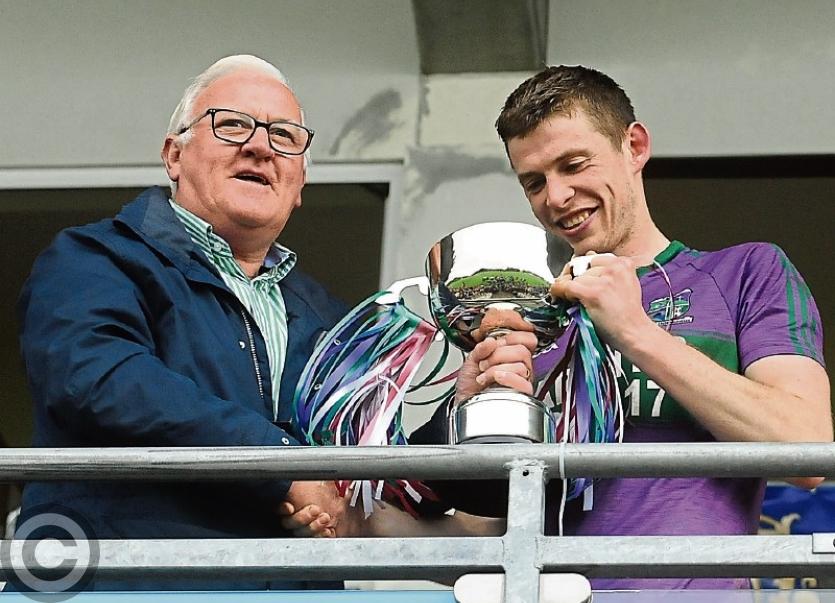 The smile on the face of Leitrim Gaels captain Aidan Flynn summed up what getting his hands on the Frank Reynolds Memorial Cup meant to him and all associated with the club.

Admitting that it wasn’t a classic encounter, Aidan expressed how much victory meant: “It’s really important for our club, we knew it was and we put an awful lot into it over the last couple of years when we had a couple of near losses. To get over the line, it probably wasn’t pretty to watch but we don’t care, we are over the line and onwards and upwards.

“It wasn’t a great spectacle but we came out on the right side of it. We played great in games where we lost and we are just delighted to get over the line.”

The game’s defining moment arrived moments before the half-time whistle and Aidan was quick to pay tribute to his younger brother.

“It was an incredible strike from my brother Jack. It was a great goal, a brilliant goal. He showed great bottle for a 17 year old to go through like that, in his first year, he buried the ball into the corner of the net.

“It was massive, it was a game changer in my opinion because that was all that was in it.”

Aidan acknowledged the goal put a gloss on their first half performance when he said: “We knew we didn’t play well at half-time and we probably got away with one, going in four points up, we probably didn’t deserve that but it was a real momentum changer for us.”

The quality didn’t always match the intensity meaning as the game developed it appeared less and less likely that Leitrim Gaels would surrender their four point lead.

However, that was not how Aidan saw matters on the pitch but ultimately all that mattered was securing victory.

“Maybe in the stand but it didn’t feel like that on the pitch all! If were a point up at the end we didn’t care and we can go home and build from here.

“We’ve had so many narrow defeats, we thought we were nearly there and then to be knocked off the pedestal. We have lost four or five finals in a row so today was massive.

“It’s a brilliant way to end the year, I can’t wait to get home now to be honest, it is going to be great.”

Before the celebrations got into full flow Aidan briefly cast his mind towards the Connacht Club Championship saying he and his team-mates will be giving their all when representing their county.

“I don’t even know who we are playing to be honest, I never looked at that but we will definitely do our best to represent Leitrim there. We won’t take that lightly, we’ll give it our best shot and we will try and represent Leitrim as best we can.”