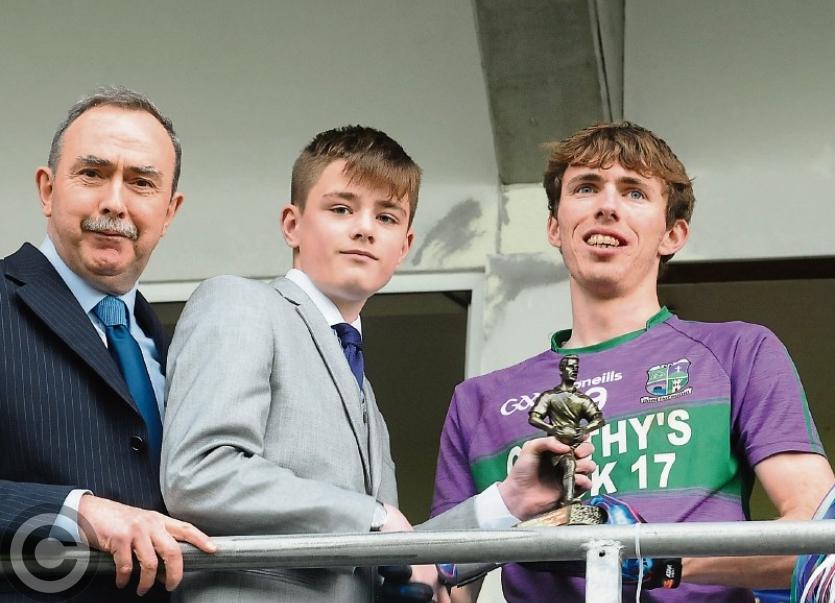 A man of the match trophy was an added bonus but when reflecting on the Intermediate Championship Final, Enda Moreton felt his side didn’t play to their full potential, writes Philip Rooney.

“It was an awful tough battle,” Enda acknowledged, “The body is sore, my mouth is sore but thankfully we got over the line. I don’t think we played up to our 100% level today. It was a wet day and a dogged game; Drumkeerin are a tough side and we just did enough to get over the line.”

Attempting to put his finger on why the game didn’t play out as many would have expected, Enda said: “Everyone hopes to give it 100% but things don’t always go well on wet days but we did enough today. I don’t think anyone really stood out on the day but as a unit we pushed through and powered on and thankfully got the win.

“I don’t think there was any ball caught clean in midfield today, it was all about the breaking ball - Drumkeerin won lots, we won lots but I think the goal before half-time really pushed us on. We felt we missed a lot in the first half but half-time probably came at the right time for us.”

Jack Flynn’s goal in first half injury time helped give Leitrim Gaels a four point lead at the break but Enda acknowledged he and his team-mates knew there was plenty of room for improvement.

“We got the goal but we weren’t really taking our opportunities. Thankfully in the second half we got a few scores but there was nothing between the teams today and it is just an unbelievable feeling to get over the line.”

The pain of previous defeats made the joy of victory even sweeter with Enda quick to pay tribute to the work of previous managers in helping them get to this stage.

“This is our seventh year at intermediate level. The last three or four years we have been knocking on the door - lost a final by two points, a semi-final by two points, I think we lost to Drumkeerin in a quarter final after a replay three years ago.

“It’s all due to the work by managers down through the years Bobby O’Rourke, Daithi Foley, Damian Eames and Mal Guckian and Shane this year, they have been unbelievable.”

Attention now turns to Connacht and Enda is relishing the challenge: “We’re going to give that a rattle. We will enjoy ourselves this week and hopefully get back on the pitch on Friday, give that a good crack and give as good an example of ourselves as we can do.”