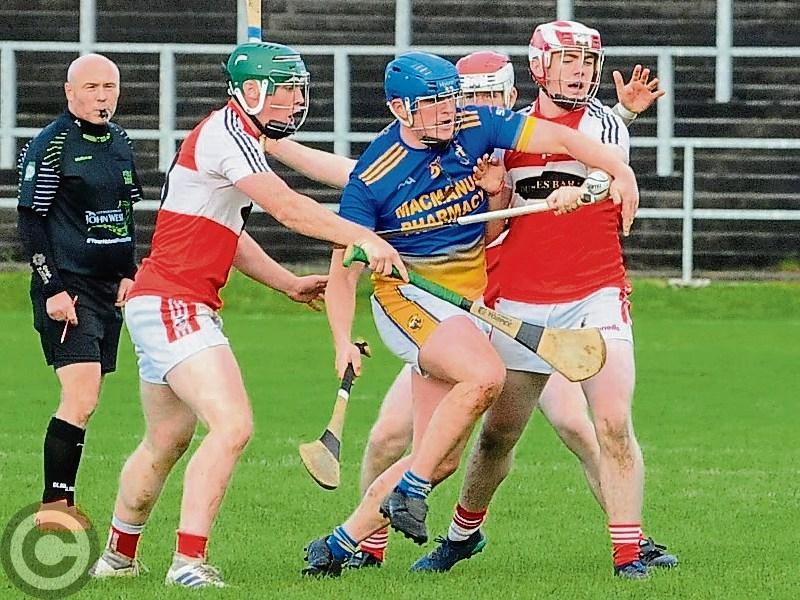 After an exciting, evenly matched final in Avantcard Páirc Sean Mac Diarmada, Carrick surged in extra time to claim a two point victory over a Cluainín side that held a slight edge over the first three quarters of the action.

It was a case of “tit for tat” for most of the game with the sides level on no less than seven separate occasions over the first 60 plus minutes of normal time, which then not surprisingly sent matters to be decided in extra time.

The game’s only goal, which Stephen Goldrick shot in the 73rd minute, put paid to Cluainín's bid to win their first county title since 2016 as Carrick claimed their third Leitrim crown in a row and 33rd in total.

In the opening two minutes, Gavin O’Hagan for Cluainín and Sean Ó Riordáin for Carrick exchanged points from frees with O’Hagan’s score coming with an excellent dead ball strike from almost 80 metres.

Ó Riordáin edged Carrick ahead with a fourth minute free but Aaron McDermott levelled matters two minutes later with the game’s first score from play. Cluainín pulled ahead by the sixth minute thanks to Gavin O’Hagan who whipped over a point from play and then a free.

Carrick responded positively over the next seven minutes to get back on level terms with Stephen Goldrick getting their first point from play and Sean Ó Riordáin slotting over his third free.

Another Cluainín surge saw the Manor men go back into a two point lead by the 16th minute after Peter Poniard pointed from play and O’Hagan whipped over another free. But Carrick stayed right on their heels with Ó Riordáin tapping over a 19th minute free.

Cluainín responded with points from James Rooney and O’Hagan (free) but after the game went seven minutes without a score, the Carrick men put in a strong finish to the half with Goldrick and James McNabola hitting the target from play.

Those scores tied the teams for the third time but just before the break, O’Hagan converted a free to give Cluainín a slender 0-9 to 0-8 half time lead, a lead O’Hagan increased within two minutes of the restart from another placed ball.

The match was ‘all square’ for a fourth time on the 36 minute mark after Ó Riordáin found the range from two frees. Cluainín surged again over the next seven minutes with Aaron McDermott and Karl McDermott whipping over a point apiece while O’Hagan tapped over a free.

Carrick responded very positively to get back on level terms by the 52nd minute thanks to Sean Ó Riordáin who chipped with two frees while Conor Beirne fired over from play.

Poniard put Cluainín back in front almost immediately when he split the posts from play. With no scores for five minutes, Carrick got back on level terms thanks to Conor Beirne who shot over a 58th minute point.

The tit for tat nature of the game continued with O’Hagan edging Cluainín back in front from a free before James McNabola whipped over 61st minute point to tie the scores.

Indeed, it looked as if Carrick had stolen the victory when McNabola fired over within a minute but Cluainin earned another bite at the cherry after O’Hagan levelled matters from a free that sent the game to extra time.

Carrick upped their game in the first period of extra time with James McNabola firing them ahead for what was only the third time with his fifth point. Shortly afterwards Carrick sub Diarmuid Kelleher received the game’s first yellow card.

It looked as if Carrick were taking control when they won a 66th minute penalty when sub Padraig McWeeney was fouled close to the goal. Stephen Goldrick stepped up to take the penalty but keeper Michael O’Brien pulled off an excellent save when he deflected the sliothar out at the expense of a ‘70.’

Cathal McCrann edged Carrick into a two point lead when he fired over a 67th minute point and a minute later McNabola extended the lead further when he whipped over another point.

McCrann received a yellow card before Gavin O’Hagan converted a free just prior to the extra time break that left Carrick leading by 0-19 to 0- 17 when referee Gus Chapman sounded the extra time interval whistle.

Carrick went five up after Stephen Goldrick crashed the ball to the Cluainín net in the 73rd minute for the game’s only goal. In a bid to pull the game out of the fire, Cluainín responded over the next four minutes with Martin Feeney, sub Michael Poniard and Gavin O’Hagan (free) pointing to reduce the deficit to two points.

But Carrick sub Diarmuid Kelleher stopped Cluainín’s late surge in its tracks when he fired over a 79th minute effort that put more daylight between the sides.

Before the end Carrick’s Liam Moreton received a yellow card and then O’Hagan blazed a close in free over the crossbar as, after a hectic finish, Carrick held out for the win.