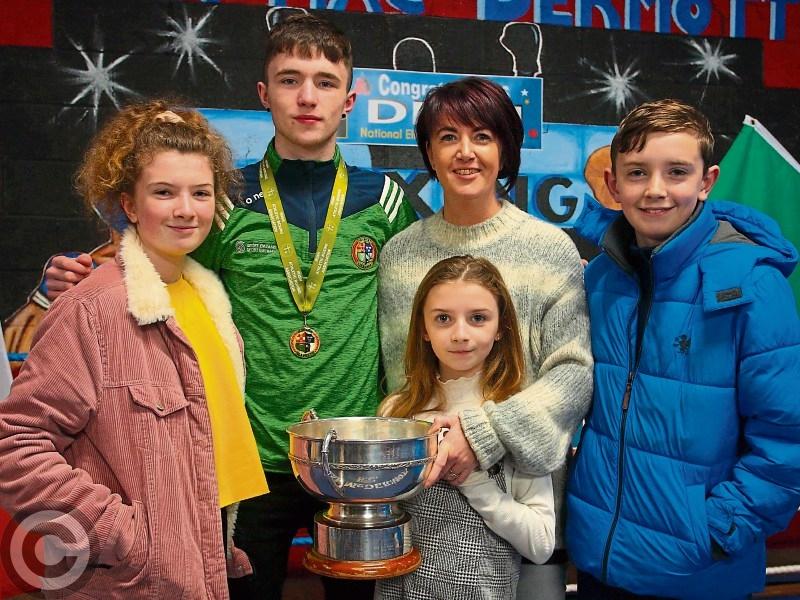 A week on from his heroics in the National Boxing Stadium in Dublin that saw him claim the 57kg elite national title, Dean Clancy made a triumphant return to Manorhamilton last Saturday and stressed there is even more to come from him in the ring.

A large crowd joined Dean, his family, coaches and club mates in Sean McDermott Boxing Club last Saturday and after posing for pictures with everyone in the room, Dean took some time to reflect on his most recent success while also keeping one eye on what lies in store for him.

Although he has only just turned 18, Dean has set his sights on securing a place on the Irish team for next year's Olympic Games in Tokyo.

Reflecting on his 4-1 win over Patryk Adamus that saw him claim the Elite title, Dean said: “It still hasn’t sunk in, it’s an absolute dream come true. I’ve been dreaming about winning this elite title since I was a young kid and to win it is the pinnacle of my career.

“I just want to repeat what I did in the underage ranks and win as much as I can in the elite ranks before I turn professional and hopefully make the 2024 or 2020 Olympics.

Competing at the Elite level could have been considered a daunting prospect but it was a challenge Dean took in his stride, insisting competing against the big boys isn't something that phased him.

“I always thought I was a big boy, even when I was younger I thought I was going to take over and that’s the plan,” he said confidently but without arrogance.

Having claimed the elite title at such a young age Dean's attention has switched from securing a place in the 2024 Olympic team to being in very real contention to represent Ireland next year in Japan but he insisted it is not a case of being ahead of schedule; rather it is a case of setting high standards and goals.

“You are never ahead of schedule. Every goal I have set in front of me I have accomplished it and I hope to repeat that,” said Dean.

When the topic of Tokyo next year was raised he said simply: “If I am able to do it then why not?”

The process of securing a seat on the plane to Tokyo isn't completely straight forward with Dean explaining he will continue to put in the hard work both in Manorhamilton and with the High Performance coaching set-up adding: “Hopefully I can perform well up there and get the nod and book a ticket towards Tokyo in 2020.

“It used to be that if you won your elite title you were meant to go but the way it is now it is slightly unfair and unpredictable in terms of who gets picked. I’ll be up there training and at home and if they think I am doing well...

“There is talk about box offs between me and the current number one at 57kg which is Kurt Walker but he hasn't won the elite title in three years.

“Technically I should be the next in line but I don’t have much of a say. He pulled out of the competition so hopefully there is a box-off.”

Dean describes the High Performance training as “unreal” but it is clear he has a special bond with the Sean McDermott Boxing Club in Manorhamilton describing the support he has received as “phenomenal.”

Although a Sligo man, Dean has strong family links to Manorhamilton and was full of praise for all who have helped him on his journey to become an Elite champion.

“I love everybody here, I love it. It is a great set-up and we have a great team behind us and the support back home is unreal too.

“It’s all worthwhile when you get the rewards and I just want to thank everyone in Manorhamilton and everyone in the club. I wouldn’t be half the person I am without them, especially my dad who puts in all the hard work.”