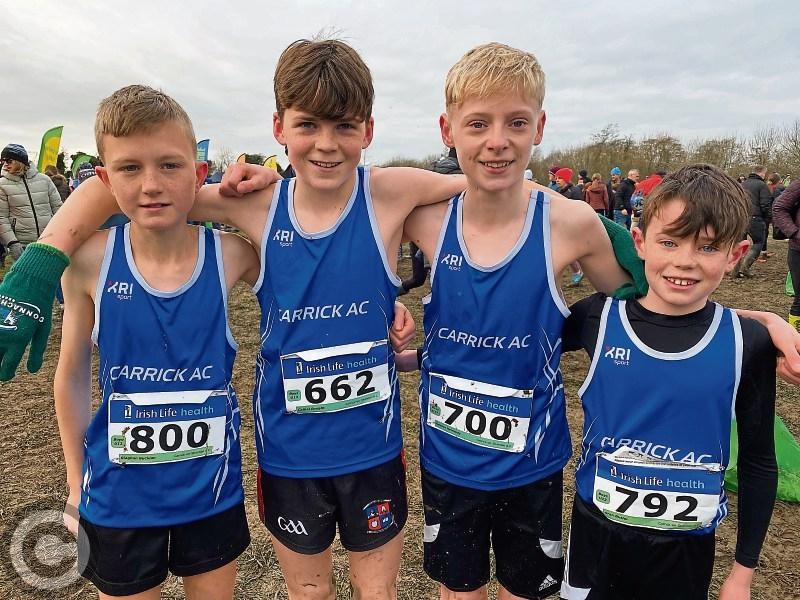 The Carrick AC team of Riaghan Guckian, Cathal Enright, Declan Kennedy and Oran Butler who finished eleventh in the U13 Boys race at the Athletics Ireland Juvenile Uneven championships in Dunboyne

Held on a flat but muddy course in Dunboyne, athletes had to contend with low temperatures and some top quality fields with Sarah underlining her good form this year with an excellent 23rd place in the U17 Girls race.

The North Leitrim athlete was the second Connacht athlete across the line, an improvement on her bronze medal from Ballina, but unfortunately, there was no full Connacht team to score in the Inter-Provincial race.

Declan Kennedy was the next highest finisher with a 32nd place finish in the U13 Boys race, his clubmate Cathal Enright a matter of strides behind in 43rd place. Declan had gone off with the leaders but just couldn't make it across into the leading group who broke away.

Carrick and Leitrim hopes in the team contests took a blow when Patrick Kennedy was ruled out with sickness as Riaghan Guckian improved well from last year to finish 123rd and Oran Butler 141st to leave Carrick 11th in the team contest.

With the four Carrick runners, Ballinamore's Niall Ahern (120th) and Mark Ahern (140th) completed Leitrim's scoring as they finished 14th in the Inter-county race. Leitrim's only other representative was North Leitrim's Luke Fitzmaurice who finished 151st.

Clara Doherty of Carrick AC was the next highest finisher as she finished 58th in the U13 Girls and sixth Connacht finisher on the day, repeating her performance from Ballina.

Connacht champion Scott Williams of North Leitrim had a tough day as he finished 73rd in an incredibly strong boys race while clubmate Sarah Mulvaney Kelly, third in Connacht, finished 103rd in an U11 Girls race that had an incredible 189 finishers.

The first indoor races of the season saw Carrick AC's Alannah McGuinness record her second fastest time of 7.75 seconds as she finished second in the Women's 60m at the AIT Baseline Meet in Athlone last week.