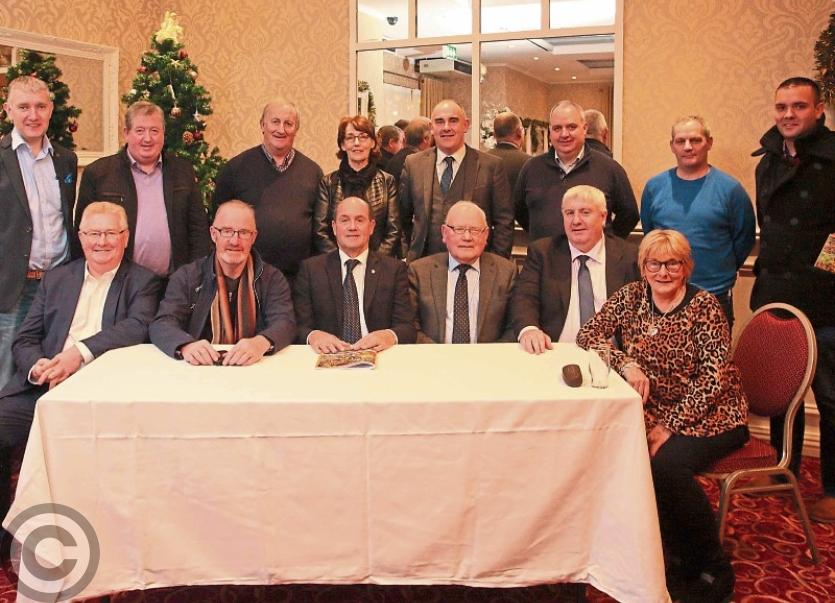 It is hard to believe that five years have passed and this will be my final address to you all. And what a year it has been for Leitrim GAA with two trips to Croke Park culminating in a hurling title promotion to Division 3 for our footballers and our centre of excellence finally complete and also an All Ireland Scor na nOg title for St Mary’s ballad group.

On the county scene it has been a historic year in many different ways. We kicked off the year with a new management team there was renewed optimism in Leitrim.

That first game way back in January set out our stall for the year and in front of a huge crowd in Pairc Sean we played Mayo and we made history by being the first gaelic football game to be settled on penalties.

Even though we came out on the wrong side on the day, it proved the team meant business this year. Next came the league and what a league it turned out to be we knew we had to get off to a good start so to give us breathing space and got the start we were hoping for.

We got momentum with us for a change and it was a very special day in Avantcard Pairc Sean Mac Diarmada when our dream was finally achieved and promotion to division 3 had been achieved with games to spare.

The day in Croke Park when I walked out with the Leitrim footballers in front of a huge Leitrim following will live long in my memory a day I never thought I would be involved in and having my nephew part of the team made it extra special.

Even though it wasn’t our day it was very special for the players management and supporters and it was so uplifting to see such a huge amount of our diaspora who travelled from all over the globe for the game and a large contingent came from America with our new sponsors Seamus and Cathriona Clarke, mile buíochas to you all.

It has been a great year but one of the most heart-warming outcomes of the year is the way our supporters have come in their droves all year growing hugely from game to game it just goes to show how much the county team means to the Gaels of Leitrim. It brought us back to the great days of 1994 on the 25th anniversary.

It was fitting that as we honoured the heroes of 1994 and rightly so our new heroes were writing their own part of history.

As we look forward to 2020 season thankfully all are on board again for the coming season it will be a big step up for the team but is a challenge they will meet head on and with the likes of Cork coming to Pairc Sean they will be great occasions.

With a second tier on the cards, I believe this will be good for the progression of Leitrim football we are up against it in Connacht with three top tier teams in Connacht but in any given year if we got a run going it is very possible that we could progress to All Ireland proper.

But if we fail to progress in Connacht, we will be in tier two and I believe this is a completion we could realistically compete for and if Leitrim could win an all Ireland intermediate it would be fantastic for the county.

As we face into a new year and a new league and championship structures hopefully some of the pressures on condensed fixtures will not be felt this year.

However a lot of challenges remain with some of our clubs struggling with numbers and indeed we have motion on clar in relation to this and we must strive to keep our clubs alive.

As we all know our youth are our future and we must give them the very best opportunities to achieve their full potential. Our clubs are doing great work in developing their players and have to be commended.

We have now completed the third year of our new games structure and they seem to be working well but we cant sit still and we need to keep reviewing our structures to ensure our games structure are fit for purpose.

The regional competition is going very well and this is an area that could be expanded upon to give lads the chance to play at their own age level and I believe this is the way forward.

Some of our clubs are struggling with numbers and amalgamations are becoming necessary and we must insure that all players regardless of ability are catered for as these are the players that will be needed for our adult teams in the future.

On the coaching front there is a huge amount of work has been done. Our three GDAs Enda Lyons, Stephen McGurn and Sean Gallagher are working with our clubs and reports are very positive and we now have a great support structure for our club coaches and hopefully we will see the dividends in the future.

Following on from our review, we have a plan for the future almost complete and should be released to clubs early in January and has the club at the very heart of our operations.

There is a huge interest in all coaching workshops that have been ran which goes to show that all our coaches are only too eager to improve and learn.

We in Leitrim GAA are committed to helping our coaches in whatever way we can and the GDAs are only to willing to help and with us all working together progress will be made. In 2020 our coaching team will be focusing further to help our clubs to improve their coaching structures.

Financial issues are always to the fore in any organisation and of course Leitrim GAA is no different. As you can see from the accounts it takes a huge amount of money to keep the show on the road but thankfully we are showing a surplus for the year but unfortunately it isn’t in the bank accounts as has been explained by Con and Martin.

But in saying that we are in a good place considering all that has been achieved this year. A huge amount of credit and thanks must go to our treasurer Martin for all his work on the finances.

He has done Trojan work all year to insure we are in a good place financially and I want to thank him sincerely for all his work all year.

Martin came on board with me three years ago and it has been a pleasure to work with him over that period he not only has a great grasp of all matters financial but has a huge interest in all aspects of the GAA and will be a huge benefit to the incoming management.

Our Supporters Club continues to be a huge benefit to Leitrim GAA and is our major fundraiser and I want to thank all for making it such a success to, both our committee in Leitrim and chair John and our Dublin based committee under the stewardship of Mike Feeney for all their work.

As we steamroll towards 2020 we have a lot in place and are in a good place for next year but we have to keep on top of our finances as something unforeseen could put us in trouble.

We had a huge amount of games this year and our coordinators were under pressure to make sure all our games were covered and thankfully they succeeded in their efforts.

We desperately need more referees to come on board and we have an increasing number of clubs with no referees, this situation cannot continue and it won't be long before games will be cancelled due to no referee been available.

We are yet again setting about a recruitment campaign and we are looking for interested parties willing to take up the whistle.

We are all human and mistakes will be made, all we can do is to minimise mistakes and I want all to show our referees the utmost respect for the job they do as they are an integral part of our games.

We all have a role to play in stamping out abuse of our referees not only on the field of play but there is a new threat of online abuse and this cannot be tolerated and clubs and county must utterly condemn this cowardly behaviour.

On the development front we had a another milestone for Leitrim GAA with the opening of our centre of excellence by Uachtarán CLG John Horan in early September.

This is a fantastic facility for County Leitrim and one to be proud of and is the culmination of many years of hard work by an awful lot of people.

I want to pay tribute to everyone who helped in any way on our journey. It was fantastic for me to have it completed on my watch but it would never have been possible without the support of our supporters who got behind the Leitrim wall project.

I only got involved in the project when I became chairman five years ago and I realised that it wouldn’t be possible to completely finish the centre with our means and that a major investment would be needed and a few people got together and hence the Leitrim wall was born and is has proven to be a huge success.

Thanks to everyone near and far for getting behind Leitrim GAA and making our dreams a reality And of course I want to sincerely thank Tony and Bernadette McGovern for their sponsorship of naming rights their commitment to Leitrim GAA is unwavering.

Attracta our hard working secretary for the professional way she conducts her business. Attracta has been by my side for the last five year through the good times and bad and it has been a pleasure to work with her, we didn’t always see eye to eye but still never had a row in the five years that just goes to show how patient she was .

I want to thank her for representing me an the many away functions due to problems with planes and I want to apologise to her for causing her such inconvenience.