Drumshanbo so close to dramatic victory over St Flannan's 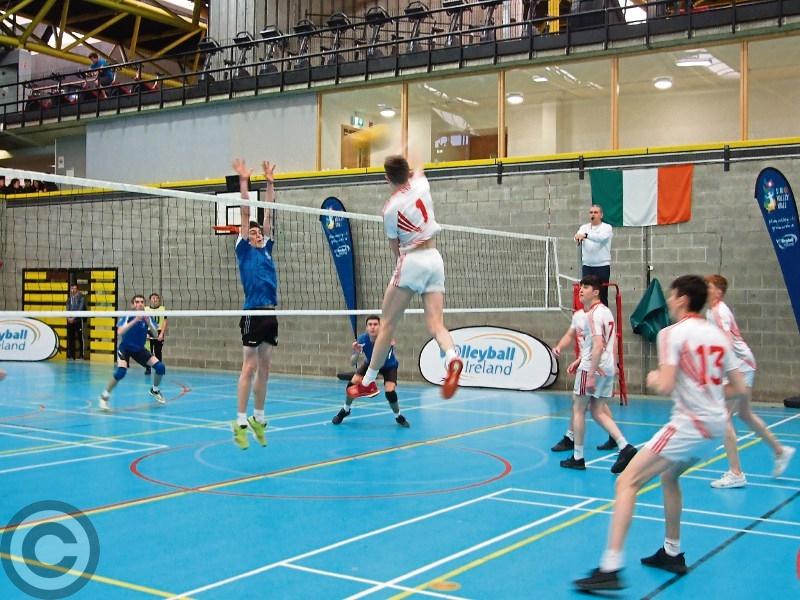 What a final! What drama. It was a marathon All-Ireland Schools Senior A Volleyball with dramatic twists and turns that enthralled the crowd who howled for over two hours as Drumshanbo Vocational battled with St Flannan’s of Ennis.

Victory is what everyone wants but, at times, Drumshanbo, ultimately defeated, gave stunning passages against St. Flannan’s Ennis.

Flannan’s with four Irish under 18 players who often make up four of the first six places on the Irish team, have an enrolment of 1173 including 814 boys compared 140 boys for Drumshanbo. It was one of Drumshanbo’s finest displays.

The start was a dream and just what Drumshanbo wanted. Flannan’s started with their two best hitters at the net and gambled on an early lead. They did get off the blocks with four winners. But Gareth Gilmartin alone hit four and Emmet Moran aced to leave Drumshanbo 7-5 up.

Then, amazingly, four more winners from Flannan’s were matched by four more from Gilmartin with Evan Foley and Peter Winters sharing the perfect sets for him. Drumshanbo led 18-16. To finish, Cathal McGourty had three winners on run of Winters’ serves to leave it 23-16 and the set was won.

In set 2, although Drumshanbo started with two winners, two doubtful net decisions went against them and suddenly it was Flannan’s time. Cillian O’Ríordán hit six serves towards setter Evan Foley and Drumshanbo had a number of errors to leave it 8-1.

Close play followed to 15-10 Then Jesus Quaye Saye served similar to 21-11 with top Flannan's blocking and lack of alertness from some of the Drumshanbo team. The sides were soon one set apiece.

The third set was unbelievable. Buoyed by their set win, Ennis hit seven winners, most on O’Ríordán’s serve again. They raced 13-3 ahead. In fact, since the start of set two, Flannan’s had won 36 points to Drumshanbo’s 17. Game over ? Well, no!

It started with Gilmartin’s serve which reduced lead to 8-15. Then it was McGourty’s turn: He hit two winners followed by five serves including an ace. Now Drumshanbo only trailed 11-15.

Flannan’s hit more winners but so did Gilmartin, most on a run of serves from Foley and Drumshanbo took the lead 21-20! Flannan's were in disarray and on Gilmartin’s serve McGourty, Winters and McWeeney all hit winners to finish a spectacular comeback.

What another story in the fourth set. Flannan’s completely lost their way as Foley served to 6-0 with winners from Gilmartin and Winters. Moran served it to 8-1 and, after his winning block, Gilmartin aced to 11-2!

Drumshanbo had won 33 of the previous 44 points!

Then Flannan’s went for broke. They hit three winners and on a run of six serves from Alan Lima brought the score back to one at 14-15. McWeeney’s serve brought some respite to 18-15 and Flannan’s overhitting gave Drumshanbo a 21-17 lead.

But the Flannan’s serve was very strong. While seldom acing Drumshanbo, they were pinning the ball in the back court and Drumshanbo were unable to get fully accurate ball to the setters.

A crucial decision went against Drumshanbo. Flannan’s served hard. Moran, almost on the end line, jumped aside and the ball went long. But the first referee called in! The line judged called out.

Despite the look of the score, the fifth set was another thriller.

At 2-2 the ball skidded off two Drumshanbo players and shot backwards towards the back corner. Luckily, Foley, with all the training of Drumshanbo handball club, raced after it and swung it over his body and back over the net. Unfortunately Flannan’s defence was magnificent.

At 3-4 McGourty and McWeeney hammered them, they got it back. At 6-8 Moran hit three great spikes before he won the point. Finally, at 10-11, Gilmartin hit two ferocious spikes but they got them up. Then frustration led to errors and the day was lost.

Flannan’s may have sailed through schools for the past two years but their four internationals have experienced lots of batterings against adults team in challenges and tournaments. Perhaps they were more battle hardy.