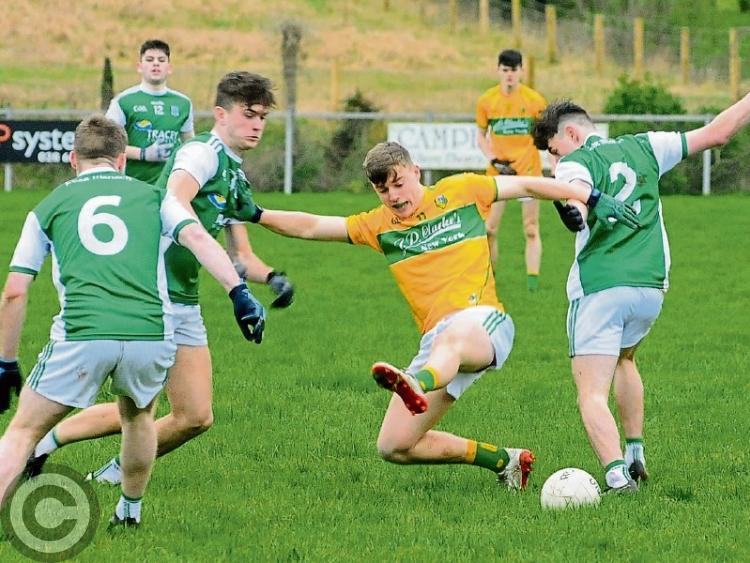 Oisin McLoughlin tries to get to the ball ahead of three Fermanagh players in last Saturday's Philly McGuinness Cup U20 clash in Tempo Picture: Willie Donnellan

It might seem like taking the easy option of rolling out the old chestnut column of “Things I'm looking forward to in .... (fill in year as appropriate) but as an Everton fan, its way too soon to talk about last Sunday's disaster and as a Leitrim fan, the chastening defeat of the U20 side against Fermanagh falls into the same category.

Yet when you do start looking at 2020 and Leitrim sport, you begin to see that the coming year offers a myriad of possibilities, of excitement, disappointments and all the emotions that make sport the compelling spectacle that drives us to distraction.

First of all, 2020 is Olympics Year and that's always a highlight for any true sports fan. We mightn't know much about sailing or boxing or rowing or athletics for most of the time but when Tokyo comes calling in July and August, the performances of the good and the great will be scrutinised, dissected, celebrated or even mocked in a festival of sport that leaves us all spell-bound by the courage and incredible feats of the competitors.

But long before that, I'm really looking forward to Leitrim's Allianz NFL Division 3 campaign. It promises to be a tough one and when you look at the fixtures, the way they've fallen and the rejuvenation of teams like Cork and Down, staying in Division 3 this year would top promotion last year as Terry Hyland's biggest achievement.

One area of concern I would have is on the impact of club fixtures. In 2019, Leitrim shoehorned an incredible five league games into 22 days from the end of June to the end of July. What happens if Leitrim's Seniors go on a run all the way to a Tier 2 Final, a final due to be played on July 18 this year? When do the club games get played?

The new club league structure will mean just seven games with county players involved and should ease the pressure somewhat but with an earlier finishing time for the provincial club championships this year, the pressure will be on to find time in the calendar even more so than normal.

I'm also curious to see how a new era for Leitrim hurling goes this year with the County side competing in the Nicky Rackard Cup and probably aiming for League glory. Its a new era as, for the first time in probably 30 plus years, there may not be a Cunniffe involved.

But new manager Olcan Conway comes with a rich pedigree and an infectious enthusiasm for the small ball code and an influx of young players makes this very exciting times for the hurlers of the county.

Another new beginning comes with the Ladies footballers after a couple of years that can only be described as traumatic - Hugh Donnelly comes in as a new manager after a fraught campaign last year that saw a group of ladies defy the odds to retain their Intermediate championship status, a team that ended up with just 18 players togging out that August day in Kinnegad.

Reports suggest peace might have broken out with good numbers in training so we're looking forward to a more competitive Ladies team in 2020.

Speaking of Ladies, Sunday February 9, 2020 will be an historic day for the ladies game in Leitrim as it should be the day that Aine Tighe starts her first game for the Fremantle Dockers in the AFL Women's League, taking on the Geelong Cats.

Tighe will be a huge miss for Leitrim this year but her story and progress will surely be one of the high points of the Leitrim sporting year. Here's wishing Aine the very best of success on her Australian adventure.

There's so much more to look forward to - County champions Glencar/Manorhamilton have lost Shane Ward and Kieran Fox so how will they go and will the disappointment of 2019 drive Ballinamore to success this year? Will Mohill be back again or will St Mary's or Melvin Gaels emerge from the pack to challenge.

It is a lot to look forward to and that's just the Olympics and Gaelic games. So roll on 2020 and here's to an exciting sporting year.