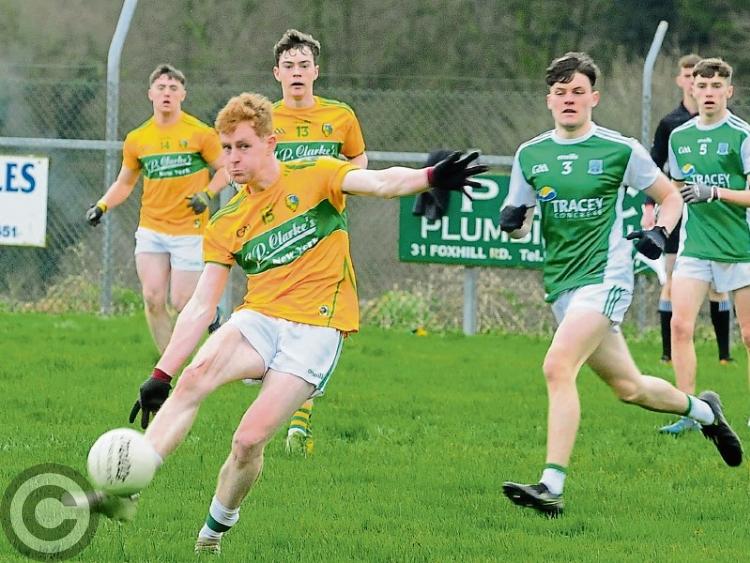 A chastening day for a highly thought of Leitrim U20 squad as they were simply outclassed by a superior Fermanagh side in the opening round of the Philly McGuinness Cup in Tempo, Co Fermanagh last Saturday afternoon.

Backboned by a core of players from St Michael's Enniskillen's Hogan Cup winning squad, Fermanagh were distinctly superior to their Leitrim rivals in terms of team work and balls skills and while Leitrim might have possessed a big physical unit, the mobility and ease on the ball of the home side proved the difference on the day.

Truth be told, were it not for a series of wonder saves from keeper Killian Gaffey in both halves, this would have been a real humiliation for a young team that many in this county feel is brimming with bright talent.

You couldn't fault their workrate or commitment but Fermanagh showed last Saturday the size of the gulf in class that has to be bridged.

Fermanagh started quickly and powerfully with Sean Cassidy giving an absolute masterclass in the first five minutes. His first from a free came after an Eoin McLoughlin foul and the full-forward followed with two excellent points in the first four minutes.

Callum Jones added a point before Gavin McGovern blasted a goal chance over the Leitrim crossbar. Fermanagh had three goal chances in the one move but two great saves from Killian Gaffey denied Brandon Horan and Garvan Quigley before Conor Love drove the ball wide.

But Fermanagh didn’t have long to wait for their goal as Leitrim lost the ball in midfield, Sean Cassidy skinned his marker. The forward uncharacteristically lost control of the ball but managed to poke it across to Pol McKervey who drove the ball to the net on 11 minutes.

The goal had a dramatic effect on Leitrim as it spurred them to their best spell in the game, starting with a strong Jamie Quinn point on 12 minutes. From the kickout, Leitrim won the ball back and worked it to Mark Keegan for a nice point.

From that kickout, Leitrim surged forward again and a nice crossfield pass found Oisin McLoughlin who hooked over a lovely point. Leitrim looked as if they had found their rhythm but Fermanagh halted their momentum in its tracks when Cassidy scored a lovely point on 15 minutes.

Callum Jones tapped over a free before Oisin McLoughlin rescued a poorly hit Stephen Goldrick fifty by getting a fist to the ball, sending it over the crossbar. Leitrim then had a series of costly wides and Cassidy made them pay with a lovely point that came far too easily.

Corner back Achlin O Caitlyn fired over a well worked point but Leitrim finished the half with points from Aaron Hoare, doing well to collect a high point and hook the ball over the bar, and an Oisin McLoughlin free.

That left Fermanagh with a 1-9 to 0-6 halftime lead and the home team repeated their strong start to the half by hitting four unanswered points from Conor Love (2), Cassidy and Jones while Killian Gaffey made a great save to deny Cassidy a goal after a brilliant move.

Gaffey made another brilliant save from Jones and Leitrim broke down the field for sub Jordan Reynolds to score a good point, Oisin McLoughlin following up with a free to cut the gap back to eight points.

However, Fermanagh’s next score killed the game when a brilliant move released Callum Jones and his rocket of a shot flew past a helpless Gaffey for the decisive goal.

Leitrim brought on David O’Connell but he lasted less than a minute as he got involved in a clash with Fermanagh’s Gareth Cavanagh. This led to a major flare up and after it all settled down, O’Connell and Cavanagh, along with Oisin Bohan, all received straight red cards for their part in the incident.

Fermanagh added a point from Cassidy before another mini-Leitrim surge as Oisin McLoughlin converted a free. Cathal McHugh joined the attack to point with four minutes of normal time left but Fermanagh replied with a point from Garvan Quigley.

Jordan Reynolds got Leitrim’s final score as the game ticked into added time but Fermanagh got the last score when McKervey pointed after good work from the outstanding Sean Cassidy.