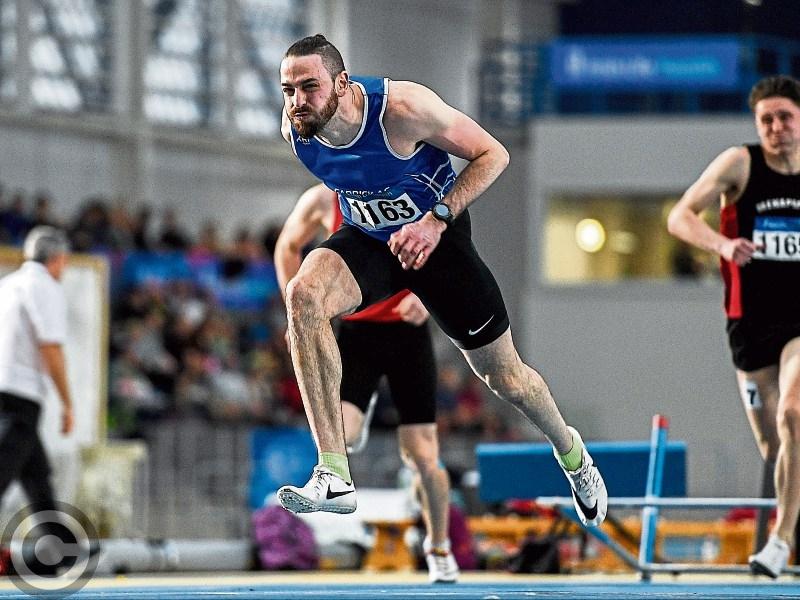 It wasn’t in the plans even a month ago, let alone the start of the season, but Carrick AC’s Gerard O’Donnell made his incredibly brief indoor season pay off in spectacular style when he won the Irish Life Health Athletics Ireland Senior Indoor 60m title last Sunday.

With the Leitrim hurlers winning their vital Allianz NHL Division 3B tie against Lancashire literally a quarter mile up the road in the Sports Ireland campus in Abbotstown, the Carrick-on-Shannon native again proved himself the dominant short hurdler in the country with two awesome displays in the heat and final at the National Indoor Arena.

Incredibly, his very first race of the year saw Gerard clock 7.92 seconds, the fastest time by an Irish athlete in 2020 by 0.29 of a second while his final time of 7.95 seconds, the second fastest, saw him finish almost half a second clear of the field.

But it was an indoor campaign that wasn’t on the cards until his form in training prompted coach Jeremy Lyons to engage in some not too subtle forms of persuasion to get Gerard to run in the National championship.

“I only decided to compete a couple of weeks ago and then I had a rocky build-up at that, I had a dodgy hamstring as I usually do,” Gerard revealed to the Observer, “Hurdling indoors was never part of the plan this winter, it was just to get a good block in and to be fit for the Summer.

“But we did a session in January and my coach Jeremy Lyons just said, he just gave me the eyes and said I think you should run indoors. I put up a bit of a fight with him for a couple of weeks and then I gave in to the idea of it.“

Even Gerard was shocked by how quick he sped over the three foot six inch barriers: “This was my first race of the season and to come away with the title, I’m absolutely delighted and on top of that, two fast times as well.

“You just really never know how you are going to go in a race and I hadn’t hurdled that much and you need to do the hurdles to see what the clock is going to stop at. I got out of the blocks very well and once I got into my running, from two or three hurdles on, I felt I haven’t been moving that fast for a couple of years, before I saw a clock at all in the heat, I felt I was moving very well.

“Once I crossed the line and I saw 7.92, that’s my fourth fastest time ever and I was kind of in shock with that. I was hoping to get sub 8.10 and a solid clean run and be happy with that.”

What made all the difference for the Carrick athlete who lifted the indoor title for the first time since 2015 was a few changes to his start and getting himself 100% healthy: “I made a couple of changes to my start, I hadn’t been doing a hell of a lot of starts or hurdles, but a few changes to that and I was trying to see how that would pay off today and it definitely did.

“That’s obviously a huge encouragement, finishing last year with two bad achilles tendons but they are holding up pretty well now. I’ve a lot of flat training done, I’ve a lot of strength training done and that is really paying off and training is going very well.”

“With the new ranking system for Tokyo, I’m just going to try and get up the ranking lists as far as possible. I think it is 40 people go in the hurdles so if I can get down as far as 60, you can always say that you are only 20 places off the Olympics, I think it is an added bonus in terms of running fast.

“If I run fast in good races, I’ll get bonus points for today in terms of winning so those times will stand to me but come the Summer, I hope I will be qualifying.”

Last Sunday’s Championships was also a special day for Gerard’s training group in Santry as the new Craig Lynch Cup was presented to the winner of the Men’s 60m sprint in memory of Gerard’s good friend and training partner Craig Lynch who was tragically killed in a traffic accident last September.

The Cup was won by Ballymena’s Dean Adams who finished the race in tears and Gerard felt it was a fitting tribute to his late friend: “It was as nice as the day can be considering what it was all about but it was done really, really well. I know Dean Adams was a fierce competitor of Craig’s and we were all wishing him across the line.

“I know it caught him a bit off guard, he had to stand through the minutes applause and the appreciation and I know it really affected him, he was probably in tears mid-race. I was delighted for Dean to win and to see all of Craig’s family and clubmates here today, it was a really nice moment to appreciate what a great athlete and friend he was to all of us.”

Also in action in Abbotstown on Sunday was Gerard's Carrick AC teammate Alannah McGuinness who made her first appearance at a Senior Championships in the Women's 60m semi-finals. Running in heat one, Alannah crossed the line in fourth place in a season's best of 7.72 seconds, just 0.05 off her personal best.

It was a big step up for the Junior international but one that will stand her in good stead for the Irish Life Health Athletics Ireland Juvenile Indoor Championships.